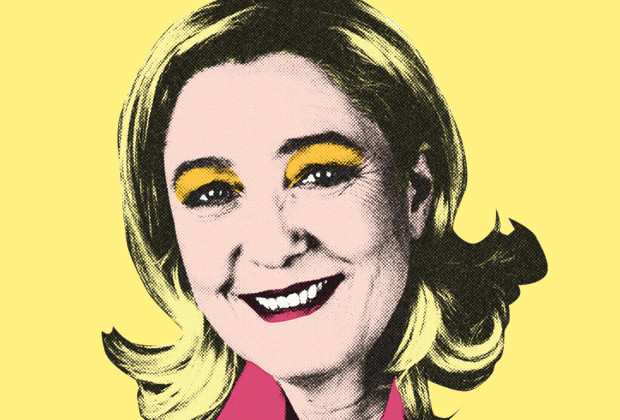 This Sunday, April 23, France will vote for a new president. It will be a cliffhanger of an election, and I’m positively dreading the outcome. The reason is there’s a fair chance a far-right politician will end up getting the most votes. Sounds familiar? At the beginning of last year, Trump had just an outside chance of clinching the Republican nomination, let alone the actual election. And yet, here we are now. And for most of my friends, back in France or here in Berlin, a repeat of this scenario would be awful. But I know for a fact that not all of them would hate a victory for Marine Le Pen and the xenophobic right. A good friend of mine is living proof.

I’ve known this guy – let’s call him “Arnaud” – for nearly as long as I’ve lived in Berlin. Arnaud is a great guy, a fun person to be around. He comes from a picturesque little village on the hills outside of Nice, in southern France, he likes playing pétanque and he cooks divinely like your stereotypical Côte d’Azur chap. But he also speaks very good German, which sets him apart from most newcomers to the Hauptstadt. He’s charming, funny, generous. For a long time, I thought his only shortcoming was to have moved to Berlin after I did – thus having contributed to the capital’s rampant gentrification which I, obviously, had no part in.

But one night, five years ago, as we were drinking beers and listening to live music at Soupanova, a Prenzlauer Berg bar that has long since closed because of said gentrification, a passably drunk Arnaud dropped the bombshell to end all bombshells. France was about to elect a new president and our slurry multilingual conversation had moved to the field of politics. “I’ll vote for Marine Le Pen,” he said. After an initial moment of stunned bewilderment, he made it clear he was neither joking, nor too drunk to realise what he was saying.

That’s how I came to realise that one of my closest Berlin friends was a Front National voter. And a rather unapologetic one to boot. As I and our other dismayed friends eyed him disbelievingly, Arnaud explained himself. He told us how thuggish kids from the North African ghetto in some town near his bucolic village ended up putting him off his passion for football, because “every single game with them ended in a fight.” It was always with them, and never with the other kids, the white kids, he said. He told us how his mother, a social worker, got into trouble “countless times” with Arab fathers or husbands bossing her around just because she’s a woman. “I think Le Pen is right, there’s a problem with Arabs in France – there’s definitely one in my region, anyway,” he said calmly but defiantly. “And it’s time someone tried to do something about it.”

I was floored. I was stumped. I felt betrayed. I tried to put a brave face, but for me, this friendship was totally over. As a black, gay man who has suffered my share of discrimination, I have, to put it mildly, little patience with racists and their apologists. The night went on in a surreal haze and I can’t remember how it ended. Whether we went on to party somewhere or not. Or how we said goodbye.

What I do recall is the feeling that lingered long afterward, a foul taste in my mouth and a sense of pervasive discomfort at the thought of my friend Arnaud. It felt like heartbreak. I avoided him for weeks. How could I not? He supported a party that spreads hate, whose leaders regularly end up condemned for preaching hate, and more crucially, a party that considers people like me second-class human beings. I spent enough years in France to know them first hand. This was personal.

Still, our Berlin lives were too intertwined for my plan never to see Arnaud again to have any real chance of success. So I did meet him again, after all. The first few times were cool, awkward; I was treading on eggshells, unsure how to behave. I realised I was happy to see him, but part of me was horribly hurt, so I kept him at arm’s length.

But time heals all wounds, and eventually, almost inevitably, Arnaud and I reconnected. We started WhatsApping again, going out again. I never really decided it; it just happened. What I did end up deciding was to see the man, my friend, who is still a great person, and not to reduce him to his disturbing political leanings. So we never mentioned them again. For some time, for sure, it was the elephant in the room, a sword of Damocles ominously hanging above our born-again friendship. But even these odd feelings of discomfort subsided. A few years later, I invited him and Laura, his German fiancée, to travel with me to my predominantly black home region. We had a wonderful time together and my mother positively doted on Arnaud. So would your mum, believe me. Never did it occur to me to tell her about his political views. Now that would have been a downer on our holiday. We flew back to Berlin with a tan and with our friendship not just intact, but stronger than ever.

But as far as I know, his mindset hasn’t changed much. Last winter, over mugs of Glühwein mit Schuss at the Kulturbrauerei Christmas market, his now-wife Laura told me how she’d had to leave the room in a rage because Arnaud and his brother cracked a particularly awful anti-Semitic joke. Classy. At the Berlin election last September, where he is entitled to vote as an EU citizen, he seriously considered voting for AfD but eventually cast his ballot for the Greens instead – only because he favours renewable energy and AfD wants to bring back nuclear plants, Laura said, rolling her eyes. Well, thank God racist parties promote idiotic policies in all fields; at least that ends up losing them some votes.

I was disappointed to hear Arnaud still has far-right sympathies, but not too surprised. I didn’t dwell on it, either. That’s my friend Arnaud: he’s a great guy who cooks the best bouillabaisse ever and has a problem with certain types of foreigners, even though he is one himself. Who knows, maybe because he has me and a few other non-white friends, he believes he’s not really racist. I prefer not to know.

It’s an odd friendship, with a man with whom I avoid discussing politics altogether. Well, at least I didn’t marry him, unlike Laura. And there’s a part of me that clings to the hope that one day, he’ll repudiate the far-right altogether. When he does so, hopefully it won’t be just because they don’t advocate environmentally sustainable policies, but because they’re mostly hateful losers, and Arnaud is not. I touch wood and hope I’m not deluded. Hope is the last to die.