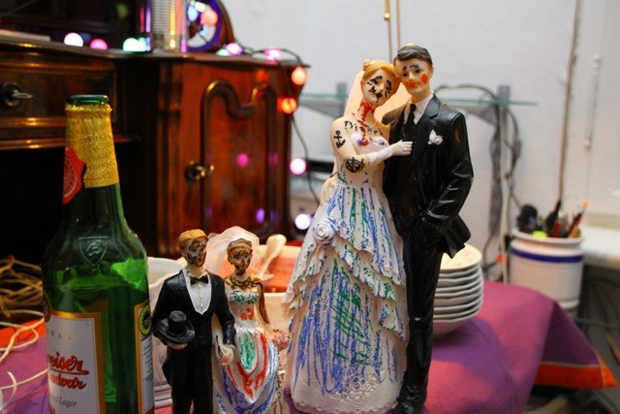 Eternal love? Whatever. For the non-Germans among us, getting married in Berlin might not be romantic – but it sure is pragmatic. John Riceburg tied the knot and couldn’t be happier about it.

What am I doing here? I’m sitting next to my girlfriend in a Wilhelminist chapel in Berlin. Stained glass, brass chandeliers, angels painted on the wall – the only thing out of place is me. A middle-aged woman is sitting behind a desk with a book and an absurdly large stamp. There’s no question about it: I’m entering the holy bond of matrimony, Prussian-style. But what I’m feeling is more than cold feet – it’s more like existential doubt. Why would anyone in this day and age want to get married?

The story began almost a year earlier when I went to a consultation about getting a work visa in Germany. Within 18 months after getting my university degree, I would need to show a full-time, permanent job contract that was somehow related to my field of study. He warned me that the clock would start ticking the day I got my diploma. So I mentioned I had a German girlfriend. “Then definitely get married,” he said. Hands down the best option.

I broached the subject with my partner, as carefully as I possibly could, and she agreed it just made sense. So we set off on our paperwork adventure.

The main thing we needed was an Ehefähigkeitszeugnis, a certificate stating neither of us were married to anyone else. Any German citizen can get this from the Bürgeramt, but as an American, I couldn’t. Instead, I had to go to the US consulate and swear to a clerk that I wasn’t married. They provided a form, in English and German, explaining that I had made this declaration and that they had no possibility to check whether I was telling the truth. The cost? Fifty dollars.

Next, we went to the Kammergericht and asked for an exemption of the need for an Ehefähigkeitszeugnis. After two weeks, the court gave me an individual exemption that was good for exactly six months. Then all we needed was my birth certificate (translated from English at a cost of €25!) and we were off to the Standesamt, where we had to fill out a form assuring them we were not getting married for immigration reasons. Well, not only those reasons…

Friends had told me their marriages were “checked” by the bureaucrats: They were put in different rooms and had to write down the story of how they met. Others got a home visit to see if they slept in the same bed. I asked, ever so carefully, if we would be checked. “Don’t worry,” the registrar said with a big smile. “We only do that with Turks or Africans.”

“This is all so unromantic!” my partner complained. It was true; all the forms and stamps were making our relationship start to feel like a visit to the tax office. So it was at the 2012 Fusion Festival, that I dragged her to the theatre at 4pm sharp, somehow successfully convincing her we absolutely needed to go see a documentary about light bulbs. The lights went down, and the Latino theatre organisers, happy to help me win the hand of “la mujer de mi visa”, projected a one-minute film (thoughtfully including German subtitles!) in which I asked her to marry me. I got out some gigantic neon-pink rings I had gotten for €5 each from H&M. She said yes – but then again, she didn’t have much of a choice with 500 people watching.

Paperwork? Check. Proposal? Check. In our eyes, we were done, but to our chagrin, our parents insisted on bringing together dozens of relatives for a traditional ceremony. Still, we refused to sacrifice our individuality. After we left the chapel, we celebrated at Tempelhofer Feld, where we all sung the song “Lieselotte XXL” about an old woman, Lieselotte Meyer, marrying a young man from Kurdistan to protect him from deportation. Next, we went to an abandoned building and had a big group of seniors spray graffiti. I almost wished the police would come so they would admit this was the sweetest case of Sachbeschädigung ever.

We had strange colours, boots, masks, and a bolo tie made by my grandfather. It really was an individual ceremony… or so we thought until a few weeks later, when we encountered the next hipster wedding at Tempelhof, complete with hodgepodge outfits and a singalong.

So, the balance sheet after a year of marriage? It still feels anachronistic to talk about having a “wife”, but besides that, It’s fucking awesome to be married! My last trip to the Ausländerbehörde, previously an hours-long affair, took just seven minutes. Plus, my partner is saving a wad of cash thanks to Ehegattensplitting, the rule by which a married person pays the average tax rate of the couple – she’s the breadwinner among us, so her rate has dropped significantly. And there are even more legal advantages that I don’t want to mention in case a right-wing politician thinks to close the loopholes.

At the end of our marriage ceremony, the racist registrar told us: “Now, the two of you have joined up on a common path. But maybe soon it will be three, four or five people.” My partner and I looked at each other in shock. Did a bureaucrat just encourage us to enter a polyamorous marriage? Oh wait, we realised simultaneously, she was referring to kids. Now that would be really anachronistic! Why would we want a baby when we’ve already got legal residency?