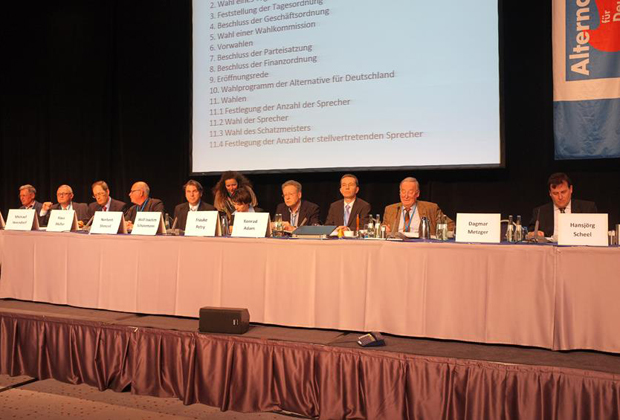 When I caught wind of Germany’s new anti-euro party which held its big launch event at the Intercontinental Hotel at the weekend, I salivated at the prospect of finding some quirky, unwholesome details about the country’s latest political upstart. Surely there were some brown-shirted Third Reich memorabilia-collecting crackpots high up in the party ranks. Someone who once firebombed a refugee home. Someone who worked for the Bild Zeitung.

No such luck. So far, the worst I could come up with was a guy who runs a petrol station in Brandenburg who used to belong to – shock, horror – the FDP.

According to most reports, the leadership of Alternative für Deutschland is a list of Herr Prof. Drs: economists, businessmen, lawyers, journalists. This is the establishment fighting back.

As far as I can tell, there’s not a speck of xenophobia or bigotry in their party platform. Having watched ex-Nazis pop out of the rank and file of the Pirate Party (now polling at a pathetic 3 percent) last year, the AfD has been vigilantly filtering out unsavoury characters from its organisation. The wording of its platform is disturbingly moderate. You’ll find sentences like “every nation should be able to choose its currency democratically.” They’ve even thrown in sensible ideas about asylum seekers being able to work in Germany – just to scare off foreigner-hating elements?

It’s unlikely AfD will even reach the 5 percent required to get into parliament in the September elections, but I have the feeling these old white guys (according to most estimates, 95 percent of them are men) have the clout and resources to shake up the Merkel “regime” more than the Pirates (young white guys) ever did. And while the Pirates stole voters from the left, unintentionally aiding Merkel’s CDU-FDP coalition in the process, AfD will nibble away support from both governing parties.

What is more interesting is how viral their europhobic ideas actually become. Apart from a few renegades, politicians in every party from left to right support the single currency. Feeling strengthened by AfD, the renegades amongst them will try to infect the powers that be with the anti-euro bug.

The only problem is: despite the common perception that Germany is Europe’s paymaster, the economy is doing very well – within the euro. Unemployment is at its lowest in 20 years. Only if the disaster of Greece, Spain, Ireland and co. was to really wash up on our shores, would any German government ever consider a flipflop on Europe’s shared currency.

One thing is for sure: thanks to these boring old white guys, German politics could turn out to get a hell of a lot more interesting.