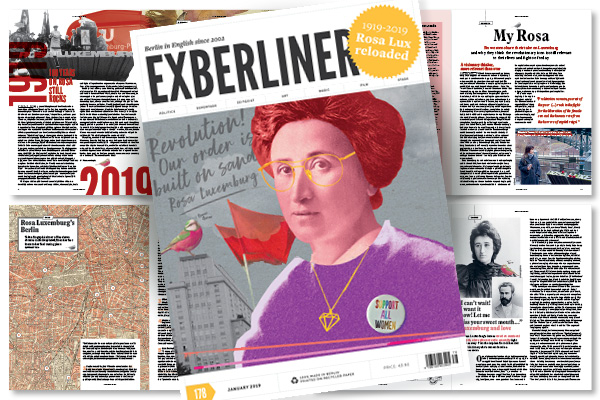 A hundred years after her death, Rosa Luxemburg is still a household name in Berlin. To explore the woman behind the icon (and myths), we spoke to an expert historian, took a tour around Rosa’s Berlin and found out about her surprising hobby and passionate private correspondence. On top of that, six Berlinerinnen told us what Luxemburg means to them today, and we uncovered the political reasons the GDR limited her cinematic visibility. Also in this issue: What to see at the 10th Unknown Pleasures film festival, some 2019 art highlights, the world’s first queer gaming exhibit, an interview with singer Alison Moyet and much, much more!

LUXEMBURG’S BERLIN A biographical tour around the Hauptstadt

“I WANT IT NOW!” The letters revealing the woman behind the icon