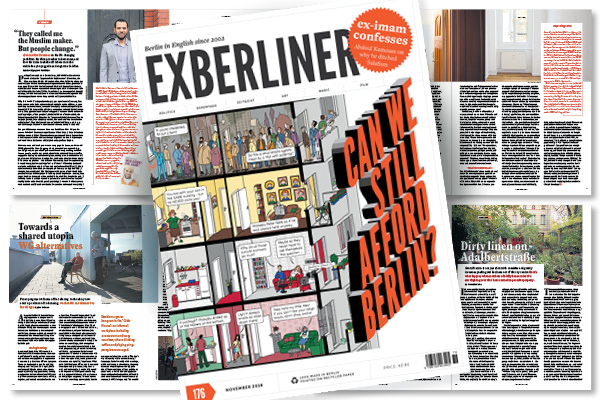 As the housing crisis continues to spiral out of control, Exberliner asks: Can we still afford this city? Are the good old days of affordable flats gone? It’s all about housing in this issue: Former squatters fighting over their communally-owned Kreuzberg home, shiny new student halls popping up across town and whether flat-sharing makes you a better person. We also found alternatives to the standard WG and asked an expert if now is a good time to buy property in Berlin. Plus: Former Salafist imam Abdul Kamouss talks about the personal crisis that changed his life, the latest in film, music, art and theatre and much, much more!

THE STUDENT HOUSING CRISIS How private companies are cashing in

BUYING PROPERTY IN BERLIN Is it still worth it?

THE NOVEMBERGRUPPE Ahead of the group’s first comprehensive retrospective at Berlinische Galerie, we spoke to curator Janina Nentwig

BEST OF The Barn goes Neukölln, Tinder for flats, a crowd-sourced Jewish map and books on scrolls