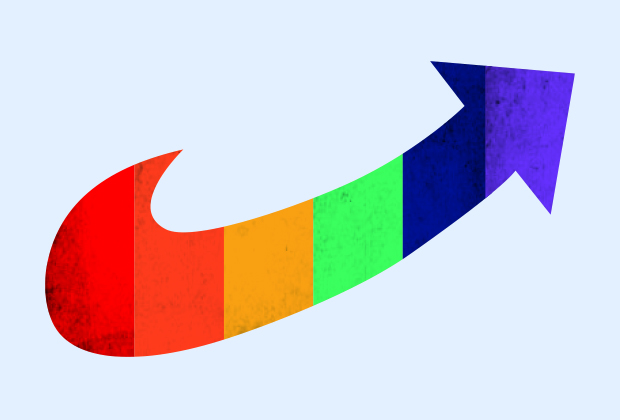 After a number of gays supported Marine le Pen before she made it into the second round of the French presidential election and a surprise upset in the AfD naming Alice Weidel, an open lesbian, as chief candidate last weekend, it seems now more than ever far-right parties are inviting LGBTQ people into the fold. They claim to defend western European liberal values from Muslim immigrants’ supposed homophobia. Are Berlin gays falling for it? Or have we come so far that being right-wing and queer are not necessarily mutually exclusive?

If you happened to be around Nollendorfplatz in the run-up to the September 2016 Berlin city elections, you might have seen a small truck towing a curious placard. On it, an image of two middle-class looking men with the words: “My partner and I have no respect for Muslim immigrants who take our love as a mortal sin.” At the bottom, a Nike-esque swoosh and the words “Alternative für Deutschland”.

The party’s defense of same-sex love was surprising considering the history far-right groups have had with homosexuals, particularly here in Germany. The 2008-erected Memorial to Homosexuals Persecuted Under Nazism at the edge of Tiergarten is a testament to that. But 21st-century Europe is an altogether different landscape, and the three most prominent right-wing populist parties in Western Europe all seem willing to invite LGBTQ people to the dance.

None so emphatically as the Netherlands’ Party for Freedom, headed by Geert Wilders. The first country in the world to legalise same-sex marriage, our neighbours to the northwest have long prided themselves on their liberal leanings – as memorably exploited by Pim Fortuyn, the right-wing prime minister candidate who denounced Muslims even as he bragged about sleeping with Arab men. After Fortuyn’s 2004 assassination, Wilders took up the banner: in Dutch parliament addresses and numerous interviews, he’s maintained that Islam is a danger to homosexuals.

Meanwhile in France, Marine Le Pen’s chief lieutenant Florian Philippot is gay, and she ap- pointed gay activist Sébastien Chenu as her new adviser. Though her party still officially stands for the repeal of France’s 2013 legalisation of gay marriage (offering an “improved” form of civil unions instead), she’s worked on her pro-LGBTQ image in the media. And it’s working – a recent poll showed that over a quarter of Paris’ gay voters support Front National.

Here in Germany, the AfD seems a bit more confused on the issue. The party campaigns against gay marriage in Germany (which only has civil partnerships at the moment), the right of gay couples to adopt and so-called “Frühsexualisierung” – children undergoing “early sexualisation” as a result of being exposed to images of non-traditional family models. It’s for these politics that Beatrix von Storch was asked to leave Berlin’s lesbian and gay street festival on Motzstraße when she popped in for a look last July. “I am in favour of registered partnerships between two men or two women,” she says. “In contrast, marriage is a union between a man and a woman. That doesn’t make marriage any better or any worse, just something different.” But asked whether she believes this union is equal, she turns taciturn: “Asking this question is already questioning the institution of marriage itself. I shan’t do that.”

It’s always assumed that homosexuals are left-leaning, but in reality, gay, white men can aff ord not to care.

Despite this, LGBTQ people do vote for the AfD. Even in Berlin. During last year’s city elections, an online survey showed that a shocking seven percent of queer Berliners said they voted for the party – although only a negligible amount of women opted to participate. Patrick Wielowiejski, a Humboldt student currently writing his PhD on “Gay Friendliness in Western European Far-Right Parties”, has this to say: “It’s always assumed that homosexuals are left-leaning, but in reality, gay, white men can in many ways afford not to care. If right-wing parties have any sort of gay platform, it’s for affluent men to whom identity politics don’t matter so much anymore.”

The AfD does have two prominent lesbian members: Jana Schneider, the 22-year-old head of the party’s youth wing; and Alice Weidel, the business consultant and Badem-Württemberg parliament candidate who represented Frauke Petry on the German talk show Maischberger. She’s now taken Petry’s place as top candidate in the party as well. But they, along with the citizens’ group that refers to itself as “Alternative Homosexuelle”, don’t push much of a homosexual platform for the AfD at all. Instead, they confine themselves to reasoning why they aren’t “left-green” and Facebook posts like the one from August 10 stating “Homosexuals will be the first to be sacrificed on the altar of multiculturalism” over the tragic image of two teenagers being hung in Iran for being gay – never mind that the boys would be far more likely to seek refuge in Germany than their executioners.

So is there any truth to people’s fears that migrants are inherently homophobic? Scandal broke out in 2009 after a survey published by MANEO, Berlin’s anti-gay violence project, asserted that people with “migrant backgrounds” committed more homophobic attacks than other groups. Berlin artist and activist Wolfgang Müller co-spearheaded a campaign to expose this line of thinking as flawed. “Criminality has nothing to do with nationality,” he says. “You don’t stop and ask your attacker what their background is, so it’s really all speculation. On top of that, you’re assuming gay people are one homogenous group and immigrants another.”

While in the end the AfD may have more in common with Le Pen’s line of thinking than Wilders’ when it comes to homosexual affairs, gays within the party are more than just an open secret, they’re now pushed to the front. But there may be something perversely positive about it, says Müller: “If you can be right-wing and gay, then this is a sign of an open society… at least, for gay people.”