Need to get away from Berlin’s big-city bedlam, but don’t have have the time (or dime) to go far? Even if you’ve already visited Schloss Sanssouci and its Prussian-era ilk, Brandenburg’s genteel capital is still worth the zone C ticket.

Know when to fold ‘em 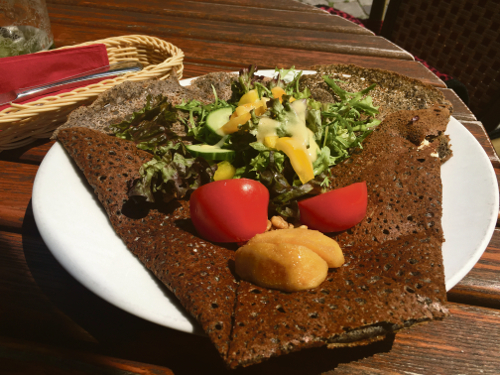 First stop: brunch. Creperie La Madeleine has been specialising in Breton-style buckwheat galettes since long before they came into gluten-free vogue. Find an outdoor seat on Lindenstraße in the charming nördliche Innenstadt for optimal people-watching, and enjoy a masterfully folded Auvergnate (€9.50) with Roquefort, salad, walnuts and caramelised apples – careful, the tangy cheese gets rich fast – or a simpler Nordique (€9.80) with salmon, horseradish and lemon.

At nearby Silverspeed Records, you can digest in peace while browsing stacks upon stacks of vinyl. As today’s music hipsters move on to the “authenticity” of cassettes, Silverspeed has an old-school vibe that is seldom found in Berlin anymore, not to mention far fewer DJs competing for merchandise. If you need to move the boxes blocking that gem of an Alexander von Borsig 12”, ask the staff – and if they don’t have what you’re looking for, they’ll check the old radio promos they just got in and get back to you by email.

Ready for a real walk? It’s time to go to Alexandrowka, the historical Russian colony built between 1826 and 1827 by King Friedrich Wilhelm III. The UNESCO-protected site consists of a grassy field sprinkled with 13 fairytale wooden houses. You can enter the museum for a mere €3.50, but don’t bother unless you want to know the exact number of apple and pear trees each resident owned back in the day. Instead, go straight to the good stuff and knock back shots of vodka at the Russian restaurant and Teestube in House 1, served by waitresses in traditional Slavic garb and chased with a mini gherkin-cheese sandwich and a Baltika beer (#9 is eight percent alcohol!). Just watch out for the helicopter-sized hornets. Oh, and menus are only in German and Russian, so have one of those languages handy.

No Butts about it 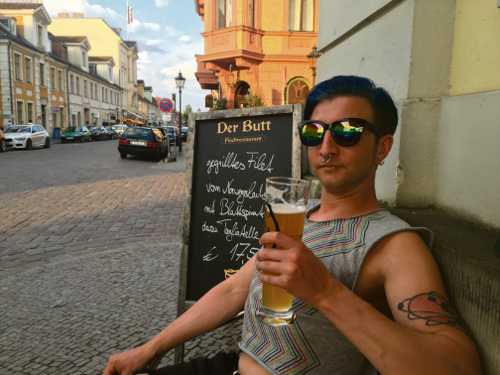 Looking for a bit of Butt in Potsdam? We mean flounder, obviously, which you can find in abundance at swanky fish restaurant Der Butt (the nickname of portly Prussian king Friedrich Wilhelm IV) back in the Innenstadt. The spot, which opened as a tavern in 1842, now devotes a section of its menu to guiltfree locally sourced fish for those willing to drop a bit of dough. The Havel eel (€20.50), pan-fried with potatoes and cucumber salad, is a medium-priced choice that’s just simplicity done perfect.

Okay, enough with the Spießer holiday – time to find something a little less stuffy. Head around the corner to the downtown Dutch Quarter and find queer bar La Leander off of Kurfürstenstraße (nothing like its Berlin counterpart). During the early evening it’s got a chill vibe not unlike Kreuzberg’s Südblock; there are parties now and then, but don’t expect a Schwuz-style rave-up. This place beats Berlin in one sense, though: where in the Hauptstadt are you gonna find a queer watering hole playing Sonic Youth’s Dirty in its entirety?

Potsdam may not be the cheapest, but the trip, even all the way to Sanssouci (through the Regional Bahn), is covered by the cost of an ABC BVG ticket (€3.30). A Tageskarte (€7.60) not only gets you there and back but covers Potsdam’s local trams and buses as well.