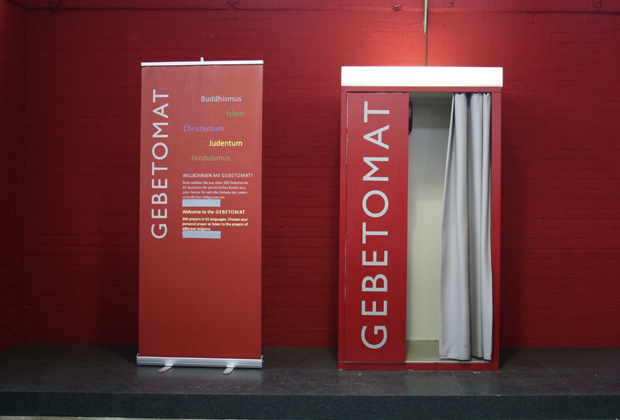 Deep in Moabit is a little neo-Gothic bazaar, the Arminius Markthalle. It’s worth a visit, not only for the stalls teeming with Turkish and German specialties, but also for the beautiful architecture – vaulted ceilings, small-paned windows, intricate carvings – dating back to 1891. Yet recently, Berliners have been given a more divine reason to visit: a tiny booth offers a channel to higher powers.

The Gebetomat – or ‘Prayer-o-mat’ – is the work of German artist Oliver Sturm, who took an old photo booth and converted it into a fully functioning automated god machine. To use it, you step into the booth, insert a coin and make your selection on a touch-screen to listen to pre-recorded versions of more than 300 prayers in 65 different languages.

For 50 cents, you can hear five minutes of “Our Father” in German, English, ‘American’ or Low German. Or listen to Buddhist, Islamic and Voodoo benedictions. Or hear Aborigine devotional songs and the solemn chanting of an orthodox Jewish congregation.

Most of the prayers were collected by Sturm, but some have been found in radio archives, like the recording of missionaries scratchily singing church songs in 1903 (find it under ’Christianity’ – ’Historic’).

Arminius Markthalle is the Gebetomat’s ninth location in Germany – it’s already been placed in Berlin’s Haus der Kulturen der Welt and Radialsystem V– so see it now before it moves again. It will give you a bit of respite from the vulgarities of the contemporary world, and you never know: it might just save your soul.