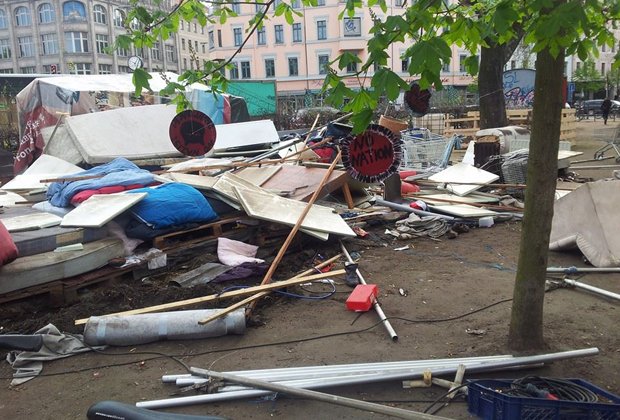 On Wednesday the headlines were all about it…

“O-PLATZ EVICTED!!!” This honestly wasn’t a big surprise. The protest camp at Oranienplatz in Kreuzberg, which refugees had set up way back in October of 2012, had been under threat from the very first day. After 18 months, the real surprise was that it hadn’t been evicted earlier, despite numerous attempts.

The shock came when I started reading Wednesday morning’s papers. Along with the news of that the refugees were gone, came this blast: “Refugees had cleared out the camp themselves.” I had interviewed many refugees and they had always declared they would not leave until their demands were met – the right to stay, to work, to go to school in Germany. I was pretty sure that hadn’t happened.

Reading the mainstream media, you would think that the refugees were trying to pack their suitcases but were attacked by Radikalinskis with black masks and Molotov cocktails who didn’t want to let them leave the camp. In fact, the Berlin Integration Senator Dilek Kolat claimed just that on Twitter: “Unbelievable how autonomists (…) are actively preventing refugees from peacefully dismantling their tents.”

On Tuesday evening, over 1000 people (even the police admitted there were 1200) demonstrated against the dissolution of the protest camp – even though it had supposedly been voluntary. A number of refugees and activists told me what had happened on April 8. Just before 6am, a group of refugees, armed with hammers, crowbars and knives, arrived to demolish the huts. This small group had signed an agreement with the Berlin Senate two weeks earlier. But of the eight official negotiators from O-platz, only three had supported the settlement.

Many refugees were still sleeping when their huts were attacked at the break of dawn. A video from VICE shows the fighting: People were threatened with iron bars and knives. The mayor of Friedrichshain-Kreuzberg, Monika Herrmann, had wanted to avoid a police operation. So while police forces were gathered en masse in the side streets, they refused to step in to prevent knife fights, even after they were called by supporters. The police came only at 3pm to drag away 200 protestors who refused to leave the square. So much for the “voluntary” and “peaceful” action.

A number of refugees from the camp have now moved into a hostel in Friedrichshain provided by the government. The Senate promised them a Duldung, a temporary waiver of deportation (often described as “permanent suffering”), for the next six months. Further promises were the individual reappraisal of asylum applications and as well as German classes. Plus, each refugee who went to the hostel got €100 in cash.

But the agreement stipulated that the refugees needed to dismantled the camp themselves – hence the vigor of that small group. “They think they are going to get a residency permit” said one student who had skipped school to go to the camp. “It’s so sad.” There’s no reason to think the refugees who worked as the Senate’s demolition crew will get any thanks for their services.

The next day, Oranienplatz was surrounded by a fence, warning tape and hundreds of police officers. When I stopped to take pictures, I was told I couldn’t loiter anywhere near the fence. But from a distance, I caught a glance of three activists who had climbed into a tree so they couldn’t be evicted. They had spent the night in the cold and rain, but the police were stopping anyone from giving them food or blankets. “It’s police torture,” the refugee Amir told a reporter from his branch. Napuli, whom I interviewed for the March issue of Exberliner, said “They’re treating us like slaves.”

Let’s not forget that politicians wanted to evict the refugees so the public could use the square. But just a few days ago, you could sit down there to read a newspaper. “Someday” is what a police officer answered when I asked when O-platz will reopen. “Maybe when the grass has regrown.” Herrmann has declared the fence will stay up to prevent re-occupations.

The Senate has been successful in splitting the refugee movement – “divide and rule”, as the taz called it. They tricked some of the refugees into doing their dirty work. But they haven’t stopped the protests. In just a month, the March for Freedom is leaving for Brussels. The students who organised the school strike in February are planning further demonstrations. And there are hundreds of other squares in Berlin.