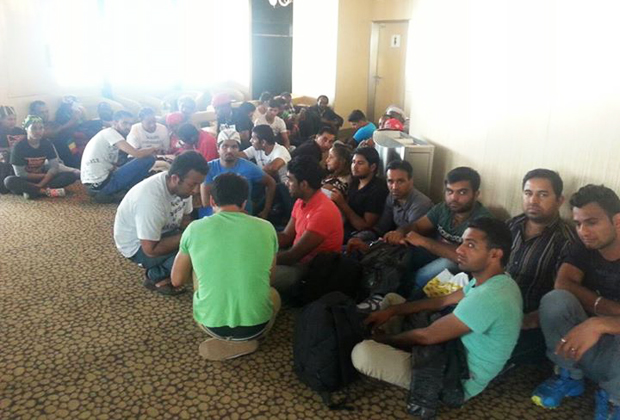 “I’m sorry, but the tower is full” says the security guard at the entrance to Berlin’s Fernsehturm. “You’ll have to try again later.” The tourists turn away. But I’m not convinced, I had heard something else was going on there. I ask her: “Are you sure it’s just full, and not occupied by refugees?” She feigns shock: “What do you mean ‘occupied’? It’s full!” Alexanderplatz is packed with dozens of police vehicles. Officers in riot gear are blocking every entrance to the tower. Because it’s full?

On Wednesday, 37 refugees occupied the viewing platform 203 meters above the city. They bought tickets and went up at 3pm and refused to leave. In a statement they explain that they have been active in political protests for several years:

“Everywhere we are turned away. Everyone has the same answer for us. Everyone refers us to the next person. No one listens to us. No one wants to be responsible for us refugees and the inhumane laws under which we live.”

This group – originally from many countries in Africa, Asia and the Middle East – have come together from Lager (camps for asylum seekers) across Bavaria. Last week 70 refugees occupied the Federal Office for Migration and Refugees in Nuremberg, hoping to find someone who would listen to their demands. They were evicted by the police.

“You have to talk to someone in Berlin”, one of the activists recalled hearing. So they went to East Berlin’s emblematic tower. “We selected this place to find public support. The people of Deutschland must understand our problems.”

These refugees say they have been in Germany for three, four or five years, waiting for their asylum applications to be processed. They aren’t allowed to work, go to school, or travel outside of the Landkreis of their Lager. They are demanding Bleiberecht (a right to stay) as well as an end to the Residenzpflicht that prohibits travel.

The police refuse to let the press up into the tower. Fabio Reinhardt, member of the Berlin parliament for the Pirate Party, buys a ticket, but only after several hours can he go up to participate in negotiations.

Via social media, dozens of supporters at ground level can see the police breaking up the sitting blockade.  “Please translate for us,” one refugee calls out the the police in a video, “since we are not allowed to learn German”.

Over the next few hours, they are let out one by one after their papers are registered. “We are here, and we will fight,” the crowd chants at each new arrival, “freedom of movement is everybody’s right.” The activists show bruises and cuts they got from the police. “They have no respect for us as human beings” says one young man with a bruise on his face. He claims they weren’t allowed to use the toilet for hours. The company that manages the tower, the Deutsche Funkturm GmbH, which belongs to the Deutsche Telekom, had pressed charges against the refugees.

As darkness falls, up to 20 Nazis from the NPD organize a demonstration against the refugees. They are protected by the Berlin police and leave with an escort after one hour. I notice at least one with the stretched earlobes and unkempt beard of a Nazi hipster.

During the occupation, the viewing platform is closed, but a constant stream of people with reservations is still allowed into the restaurant one floor above. I ask people coming out if they saw the refugees. No, they assure me, they just had their meal. Videos have been posted on Facebook showing a cacophony of screams as the police drag away the activists. “But we didn’t notice anything”, the tourist repeats. Why, I wonder, do Germans always say that?

The refugees end their statement with the reminder: “Every day, people kill themselves in the Lager because they can no longer live this hopeless and painful live. We demand a conversation with the responsible politicians. We are people too.” After the eviction of the Oranienplatz in April and the partial eviction of the school in the Ohlauer Straße last week, some racist politicians might have hoped the refugee protests would die down. But as one banner at the time already warned them: “You can’t evict a movement.”