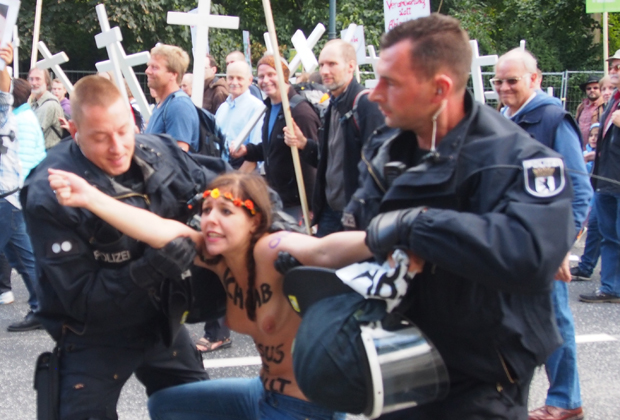 It’s Saturday, a bit after 1pm, the sun is high over the Kanzleramt and a large crowd has already gathered for the annual Berlin March for Life (“Marsch für das Leben“), a pro-life event “to remember the aborted children and the numerous women, men and families who suffer from an abortion.” A succession of speakers take to the stage, each followed by enthusiastic applause. Just before 2pm the March sets off… I embed myself among the “soldiers”.

The procession follows a cordoned off route designed by the police to separate demonstrators from counter-demonstrators (there are a few with pink balloons). A few faces somehow stand out of the crowd of mainly nerdy-looking family folks carrying white crosses or banners with photos of children and new-borns. One sign shows a Down syndrome kid with the slogan “Jeder Mensch ist gleich Wertvoll” (Every human is equally valuable), another calls for a Europe without euthanasia. I recognize Theresa whom I interviewed a few months ago, and Irina Khanova, the Hamburg based founder of FEMEN Germany. I know something’s about to happen and I don’t want to miss it.

In no time seven of the “demonstrators” have jumped ahead of the procession and stripped off their jumpers, shirts and jackets. Naked to the waist they proudly face the marchers head on, chanting and screaming, their breasts and bellies covered in painted slogans: “GOTT IST TOT”; “ABORT THE POPE”; “ICH HABE JESUS NICHT GEWOLLT”; “MY BELLY BELONGS TO ME”…

I knew it would happen – but I didn’t see it happen – within a split second the damsels have transformed themselves from girls-next-door to FEMEN-sextremists and completely stolen the show. The police are also taken by surprise and fight with journalists and photographers to reach the wild strippers. They’re immediately dragged out of the demo – followed by a cortège of photographers. A long photo shoot ensues… boobs, action, slogans…. with the Reichstag as backdrop.

Up to that point it was all rather boring. Old and young pro-life demonstrators looked disappointingly normal. Just imagine a demo of totally mellow uncles and aunties and kids. The only weird thing about them, is that those people exist at all. I mean people who would never abort – fine. People who think abortion is sad – it’s never great. But people who feel they have to fight women’s right to do it (a benchmark in the history of women’s liberation) and then feel they should come to Berlin, from Warsaw, Prague, Paris, Amsterdam, Basel, Brussels, Stockholm, or Vienna – to demonstrate against abortion, 2000 or 3000 of them in total, here, in progressive, uninhibited, godless Berlin… that’s slightly disturbing.

But you can count on FEMEN’s sextremists to turn a rather uneventful afternoon into a freak show – complete with a little police violence and a circus of photographers trying to capture an eye-full of young, energetic flesh. The girls made their Saturday demo assignment a hell of a lot more fun.

The pro-life nerds? They didn’t really seem bothered by the FEMEN girls, progressing on their way, many with the disturbingly enlightened faces of the chosen. The blessed ones. They know we’re all sinners. And they’ve already forgiven us. At least that’s what their benevolent smiles seem to say.