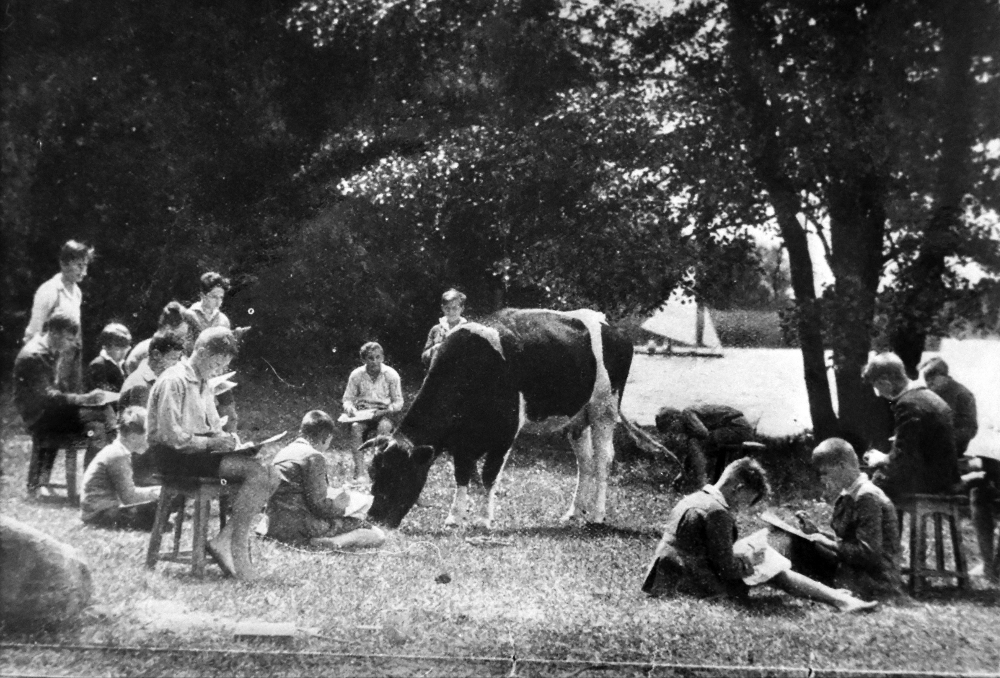 Located on a small island lost in Berlin’s Tegeler See, Schulfarm Insel Scharfenberg was the most radical of all pedagogical experiments started during the Weimar Republic. Today a film pays tribute to this unique educational bubble.

I magine a school in which the students are in charge. They can decide on what they want to learn, how they should structure their day, and even cast their vote on who can stay and who must leave. This isn’t a plot from The Lord of the Flies, but an innovative education system started by pedagogical reformer Wilhelm Blume. Schulfarm Insel Scharfenberg (School Farm Island Scharfenberg), formed in 1922, was the most radical of all educational experiments started during the Weimar Republic. Yet it’s not a symbol of a bygone era either. Hidden away on Tegeler See, only accessible by either rowboat or ferry, Scharfenberg still stands today, holding 450 students, 70 of whom are boarders. 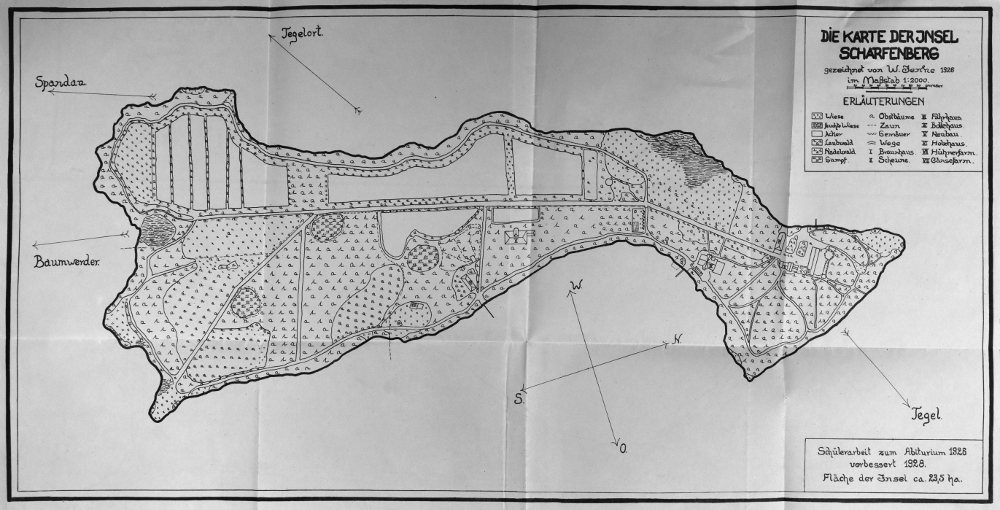 Inspired by the pedagogical ideas of Swiss reformer Johann Pestalozzi, Schulfarm Insel Scharfenberg sought to teach through the “head, heart and hand” methodology, splitting classes between classroom education and physical tasks such as farming, sailing and horse riding. Now a fi lm pays tribute to Scharfenberg’s unique history, charting its process from threats of Nazi takeover and rapid de-funding in the 1990s, to how it remains standing today. Kati Simon, curator, and Zsolt Vásárhely, artist, discovered the school after moving or (in their words) escaping to Berlin from Hungary. Interested in the possibilities of radical education, their 50-minute video captures the history of this one-of-a-kind, educational bubble.

Ahead of a special screening at Lichtblick Kino in September, we caught up with Simon to discuss what made this school so unique.

What makes Schulfarm Insel Scharfenberg such a radical school?

It is perhaps the most radically democratic education system that has ever existed in Berlin. The students could decide what they wanted to learn, how they wanted to learn and how their everyday life was regulated. Both teachers and students could vote on everything with equal voting rights, and as there were more students than teachers, their voices were always in the majority.

What was the purpose of the school when it was established?

In line with the new education movement of the Weimar Republic, politicians wanted to give high standard education not only to the bourgeoisie, but also to the working class. So they offered Blume the freedom to try out his radical ideas as a pilot scheme. Based on the results, they would take the successful elements of his experiment, and build them into the new education law.

Which innovations at Scharfenberg ended up being implemented into Berlin law?

Some elements of this experiment were taken over, not only in Berlin, but across the whole of Germany. For example, Scharfenberg voted on everything through a student parliament. Now virtually every school in Germany has a student parliament. Also Scharfenberg was the first school in Germany to teach acting as a subject. Now all schools teach acting.

Who was the founder Wilhelm Blume?

He was a pragmatic guy who drew from multiple sources to create his own educational project. There were many revolutionary pedagogical theories floating around, from Pestalozzi’s ideas to the Winnetka Plan. Blume wanted to open his school to those working-class children who otherwise couldn’t have gone to high-school. The founding principle was to develop a fully rounded individual by focusing on three main elements – “head, heart and hand”. According to this design, taken from Pestalozzi, ‘head’ refers to rational subjects like logic and reason, ‘heart’ refers to developing one’s moral character by establishing friendships and taking on responsibility and ‘hand’, of course, refers to physical labour. Each afternoon was dedicated to farming activities, such as milking cows, working on the fields, and collecting chicken eggs. Additional practical skills, such as blacksmithing and beekeeping, were taught alongside academic subjects such as mathematics and literature. Yet, in creating this unique scheme, he was very democratic, allowing the students to have a say in what kind of school would be created.

Do you think the school has retained its original ideals?

Actually, after 1968 the school strayed away from their ideals. They began to teach the mainstream Berlin curriculum and in the 1990s, due to financial reasons, the city government wanted to close it. That’s when teachers, students and parents got together to work out a concept that would convince the Senat that the school was worth keeping. So they tried to go back to the principles from the Weimar Republic. Of course the current German law does not allow for such a radically democratic structure as in the 1920s – for example, students can no longer vote on whether or not to expel other students. However, they have succeeded to introduce innovative methods such as the trimester learning rhythm; the school year is cut into three units and students concentrate on only three subjects intensively. Also, they have one-and-a-half-hour classes, with unusually long 30-45 minute breaks. During these breaks they can use the natural environment that surrounds them to relax or to further their studies. There is an interesting rule that outside the school building there is no wi-fi. As it’s on an island, the students are forced to engage with one another!

How much emphasis do they still place on physical learning?

At the very beginning, physical and manual learning were almost on an equal footing with formal learning. Now manual labour is still around, but for only one afternoon a week or as part of a specific subject. It is up to the students to choose what they want to do with this time. Nonetheless, the school still offers water sports such as rowing, sailing, and general seamanship, in which they learn how to repair boats. What is most charming, however, is the interaction available with animals. Many students take part in gardening and beekeeping – they sell the honey they make at the school’s Open Day. Horse riding is also an option, as the school has horses and ponies. There’s really something for everyone here.

NOT MUCH IS KNOWN about Scharfenberg during the Nazi era, in which the school was nationalised and Blume’s democratic ideals were removed in favour of authoritarianism. Yet the school, home to a mixture of left-wingers, communists and Jews, boasts several alumni who took an active part in der Widerstand (resistance). They were part of an informal group dubbed by the Nazis as Rote Kapelle (Red Orchestra), a troupe of German citizens who engaged in non-violent resistance to mounting totalitarianism. They helped provide safety to Jews by distributing leaflets and reporting steadfastly on Nazi crimes. The usefulness of their work has been debated, but their bravery has not.

Scharfenberg’s very own Hans Coppi, who attended the school from 1929 to 1932, and whose parents were enrolled in the KPD, formed his own resistance circle alongside fellow Scharfenberg student and future historian Heinrich Scheel. Berlin resistance leader and Luftwaffe officer Harro Schulze-Boysen entrusted him with relaying secret information to the Soviet Union via radio. Unable to complete his mission, he would later take part in a Zettelklebeaktion (sticker-pasting operation), in which anti-Nazi messages were distributed in phone booths and on walls. Caught by the Gestapo in 1942, he was eventually murdered in Plötzensee prison. So was fellow Scharfenberg alumnus Hanno Günther – who attended the school in 1934 and who got involved in distributing a series of leaflets entitled Das Freie Wort (The Free Word), calling for peace and encouraging armaments workers to sabotage their own factories. Günther was arrested by the Gestapo in 1941, before being murdered in Plötzensee prison just two weeks before Coppi. The Scharfenberg alumni who did survive the war, Karl Mundstock and Heinrich Scheel, later went on to be distinguished authors, often writing about their own experiences in the resistance.