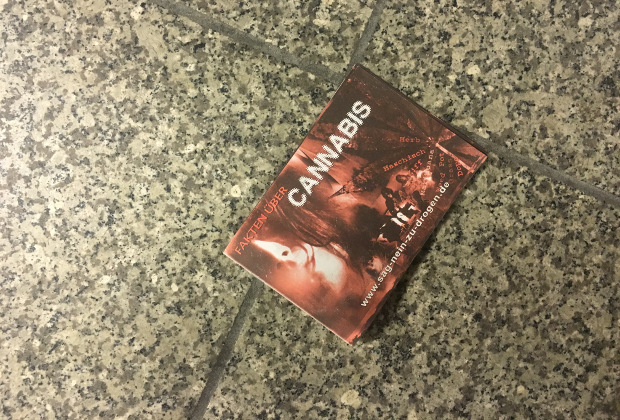 In the latest issue of Exberliner, you can read all about Berlin’s most notorious square. If you grabbed the issue, you know Kottbusser Tor is home to many a Berliner not welcome in other parts of the city: dealers, freaks, tourists and also one or two ratty journalists. There is one other group that can be found here from time to time: Scientologists. They too have been spotted among the riff-raff.

I’ve admitted I’m a bit obsessed with the quirky “religion” founded by pulp science fiction author L. Ron Hubbard. And while I’ve checked out their temple in Charlottenburg from the outside, I’ve never gone in to take a tour or a free personality test (though my Exberliner colleague Ben Knight can tell you all about it).

But on one warm Sunday in March, Scientology came to me – or at least to my second home on Kotti. There was a delay on the stairs leading out of the U-Bahn. A young man in a leather jacket and sunglasses was standing at the top of the staircase, blocking everyone, handing out small orange and black booklets promising “Facts About Cannabis”.

I recognised them immediately: the “Foundation for a Drug-Free World” is a Scientology front group. It might claim to be a secular initiative, but the foundation is staffed by Sea Org members and their materials are printed at Scientology facilities, as journalist Tony Ortega has documented.

These booklets used to appear all the time at my fourth-favourite Mexican restaurant. They come in different colors with “facts” about different substances. Unfortunately, it’s just a bunch of banal propaganda. If you’re looking for hokey stuff about a pot smoker losing his home, then his car, then his house, then his kids… the booklet (English link) will disappoint. It just says vague stuff about how “Texas Tea” can cause “structural damage to the brain” and possible “birth defects” – but nothing about Jimmy murdering his mother because he smoked a reefer.

If you want to learn Hubbard’s real theories about drug addiction – which is apparently caused by souls murdered 75 million years ago called “Thetans” that cling to your body – you’ll have to pay tens or hundreds of thousands of dollars to the Church of Scientology. Or just read it online.

But the young man handing out the booklets at Kotti did not conform to my image of a typical pasty, white, middle-aged, middle-class Scientologist. “Are you a Scientologist?” I asked him. He looked confused. “Was?” I tried to explain: “That booklet is from Scientology.”

Right on cue, a woman came up to us: “What’s going on here?” She had on a teal t-shirt with the Foundation’s logo. With a stare that could cut through hard cheese, she looked exactly like I imagine Scientologists. She instructed the young man to ignore me, but he clearly wasn’t as loyal to Hubbard’s command intention as she was. “Fifty euros,” he said, in explanation of what he was doing. “Do you need a job?”

Fifty euros is a lot of money for many of the people hanging around Kotti. He didn’t say how long the shift was. So, should I try handing out flyers for Scientology? That sounds like the beginning of one of my nightmares… In the end, I took a photo and left. If I want to deal with the Thetans clinging to my body and causing drug addiction, I’ll just self-medicate with alcohol.