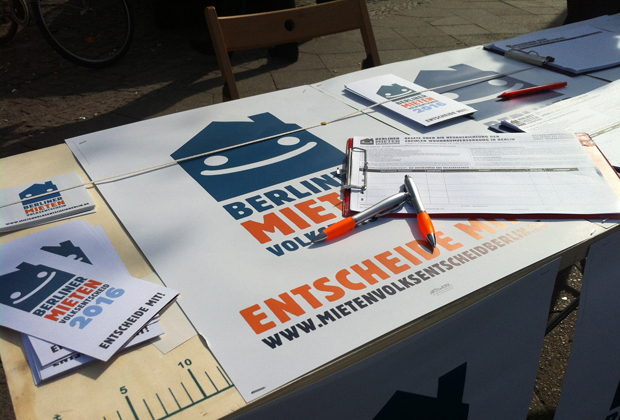 Screaming your lungs out about gentrification on May Day is good fun and all, but rather ineffective in actually changing anything. Affordable housing is the single most important issue facing Berlin right now. Last year the population of the city grew by 40,000 and the demand for housing, as anyone looking for a flat can attest to, is exploding. Builders and real estate agents are making a killing. And the city has earned handsomely from rising real estate tax revenue. At the same time, over the past decade social housing subsidies have been slashed, hundreds of thousands of publicly owned flats sold off to investment firms, and the public housing companies have increased rents as if they were private landlords. The result: evictions are on the rise. The way things are now, virtually every new residential project being built within the Ringbahn is in the high-end or luxury segment. The unemployed and low-paid workers are increasingly being forced out of the city.

Angela Merkel’s government has taken note. The new Mietpreisbremse (rental price “brakes“) legislation goes into effect in June. This law stipulates that new rental contracts cannot be priced more than 10 percent higher than “typical” local rents for the type of housing as determined by the Mietspiegel (government guidelines on rents according to neighbourhood and type of flat). This is a huge improvement over the common practice of jacking up prices for new tenants. While it should reduce the damage done by predatory investors, it won’t actually create affordable housing. The city has stated it wants to build a few thousand new affordable units per year, but many Berliners feel more radical steps are needed.

Enter the Berliner Mietenvolksentscheid, a grassroots campaign for a citywide referendum that could forge an affordable housing policy for Berlin. The aim is to hold a referendum on a law that would create a Wohnraumförderfonds (a fund that would subsidise rents for low income Berliners, as well as support the construction of affordable flats). Through these and other measures, the campaigners claim 500,000 (of the city’s 1.6 million flats) apartments can be made or kept affordable (“cold” rents of roughly below €6 per sqm/month) in the long term.

The proposals would, all together, cost €228 million per year (or 0.91 percent of Berlin’s budget), though if one includes affordable housing measures already budgeted by the Senat, just €151 million in additional spending would have to be redirected towards housing.

The campaigners seem very well organised. As of today, the campaign which launched in early April has collected 23,000 signatures of support, more than the 20,000 needed by the end of May to move onto the next stage. The validity of each signature is checked by the authorities so it’s important to gather more than the requirement. Unfortunately, only the names of German citizens registered in Berlin count. The same goes for voting in the actual referendum. But non-Germans can sign the petition anyway – to make their voices heard. And they’re more than welcome to help with the campaign, says Berlin Mietenvolksentscheid press spokesman Rouzbeh Taheri. Their website provides info on activist groups across the city.

Assuming stage one is successful, the next phase of the process – the Volksbegehren – will go from January to April next year. If at least 175,000 valid signatures are collected in that period, the whole things goes to an official referendum in autumn 2016. Berliners stand a good chance of taking this issue into their own hands. The referendum on keeping Tempelhof field free of development was just the warm up. This is a real chance to let the voice of the Volk be heard!