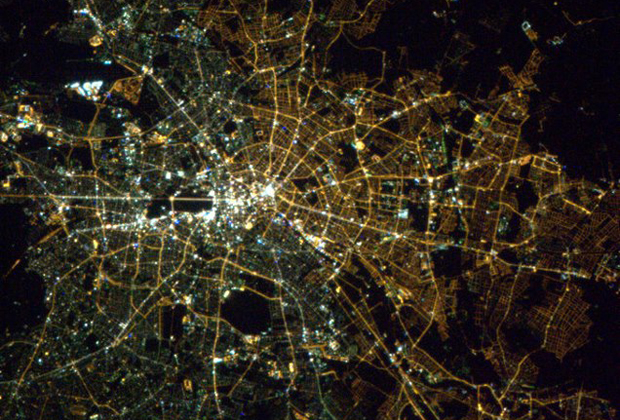 Canadian astronaut Chris Hadfield shot this great pic from the International Space Station the other day. He tweeted: “Berlin at night. Amazingly, I think the light bulbs still show the East/West division from orbit.”  Hadfield’s Facebook post prompted plenty of comments on the sad legacy of communism, as if the difference in street lighting somehow proved that the once socialist East is still poorer than the western half of the city. The Guardian said it showed “Berlin’s ongoing struggle for unification.”

What nonsense. These days, the city is so well unified that – from the ground at least – more and more people keep getting east and west mixed up – especially the tourists, eager for any remaining evidence of Cold War division. But the two halves are disappointingly similar. In fact, the “East” is by and large rather affluent, while most poor areas happen to be western: Spandau, Wedding, Neukölln…

Young expat-types living in Neukölln sometimes express surprise that the neighbourhood didn’t belong to East Berlin – because it’s still so “fucked up”. On the other hand, Mitte is often believed to belong to the former West.

The view from space tells us nothing about Berlin – other than that the Ossis had different lightbulbs – which still seem to be going strong more than 20 years after reunification.