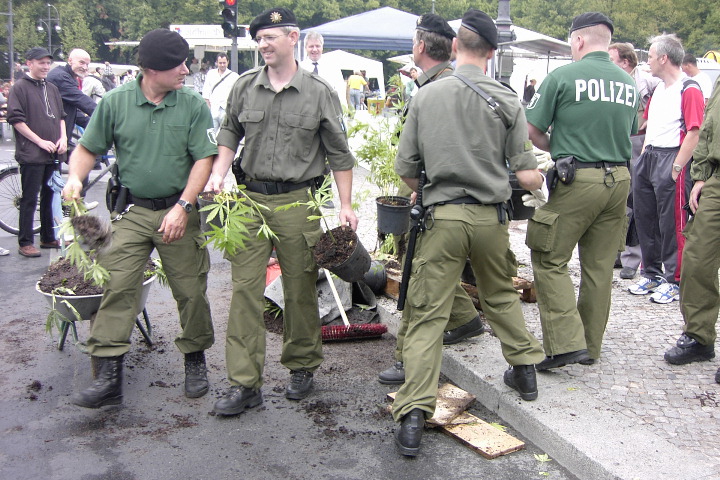 A foreign visitor to Kreuzberg or Friedrichshain could be forgiven for believing cannabis is perfectly legal in Germany. The whiff of weed is everywhere: billowing from balconies, perfuming the stuffy atmosphere of clubs, in parks, on the banks of the Spree, drifting across the Landwehrkanal. No one seems much bothered by the THC haze over the city. You’re more likely to get asked to put out your joint because you’re breaking the smoking ban than laws on drug possession.

But: cannabis is illegal here. Growing it, selling it, having it. The Berlin police, however, tolerate possession of a few grammes by the average pothead — despite the city-state’s Minister of the Interior Frank Henkel (CDU) and his ill-fated push for “zero tolerance” in and around Kreuzberg’s Görlitzer Park.

Zero tolerance is a doomed concept in Berlin, simply due to the size of the market. A survey commissioned by Berlin’s “drug czarina” Christine Köhler-Azara found that a quarter of Berliners aged 18-64 had consumed cannabis. A whopping nine percent said they smoked hash or pot “nearly every day” over the past 12 months. Georg Wurth, head of the German Hemp Association, believes that the German cannabis market is worth at least two billion euros. That’s some big, insuppressable business.

This summer, there’s a feeling out there that the times are-a-changing. Since late June, when Friedrichshain-Kreuzberg mayor Monika Hermann (Greens) sent in an official application to the Bundesinstitut für Arzneimittel und Medizinprodukte (Federal Institute for Drugs and Medical Devices) to allow controlled sale of cannabis in her district, the legalisation debate has reignited with surprising energy, with politicians and media from across the political spectrum declaring it is finally high time for a policy shift.

Significantly, Spiegel Online, the medium that is read religiously by every journalist in the country, published an opinion piece in which Stefan Kuzmany writes:

“For many people in Germany, a joint every now and then is as normal as enjoying a glass of red wine. Yet they’re treated like criminals, as if they were dangerous for themselves and others, while the far more dangerous substances alcohol and tobacco are tolerated as integral parts of our Genusskultur (‘culture of enjoyment’).”

The evocation of “red wine” indicates to the well-to-do, educated classes, the types who frequent the opera and vacation in Tuscany (among them most people in media and politics), that weed is a more-or-less harmless pleasure, not some nasty toxic thing consumed by losers and low-lifes. That other bougie bible, Die Zeit, also senses that a sea change is underway in Germany and writes that cannabis legalisation seems to be the one topic everyone can more or less agree on this summer. The northern city-states of Bremen (whose new SPD mayor is flat-out in favour of legalising the herb), Hamburg and Berlin are furthest along with plans for state-controlled “coffeeshops”, but even in Munich, the SPD is rallying for legalisation. A little grass at Oktoberfest wouldn’t be a bad thing, would it?

The smaller parties, i.e. the Greens, Die Linke, the FDP (still influential despite having no seats in the Bundestag), and, of course, the Pirates are all for lifting the cannabis prohibition. Officially, the SPD has no strong stance, but considers the subject worthy of further debate, while Angela Merkel’s CDU officially remains opposed to liberalisation of any drugs… though just in May, prominent CDU politician Joachim Pfeiffer, the party’s parliamentary spokesman on economic policy, issued a bold joint statement with a Green colleague in favour of the state-regulated sale of marijuana!

Will all this pro-pot talk go up in smoke once the summer “silly season” is over? Merkel, of course, calls the shots in Germany and recently told Youtuber LeFloid that she’s “very restrictive” when it comes to cannabis,

But as we know, Merkel’s cunning knows no bounds. Her positions on such issues are in fact plastic, they mutate over time, depending on their usefulness in helping her maintain power. The chancellor is exceptionally skilled at robbing the liberal left of their talking points. That’s what she did with the phase-out of nuclear power, same-sex civil partnerships, the minimum wage and many other issues. With cannabis suddenly high up on the agenda, I wouldn’t be at all surprised if Merkel made legalisation her next play.