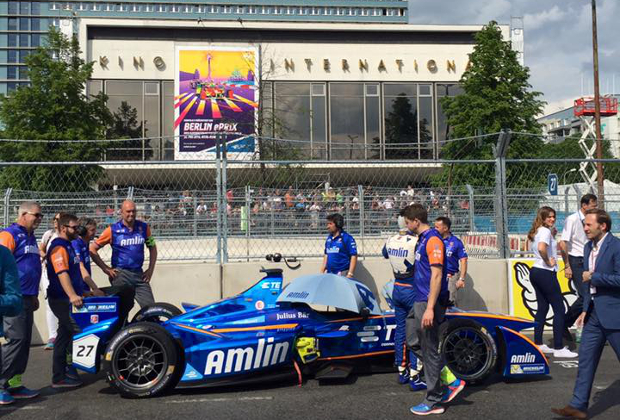 You might have noticed all last week that Karl-Marx-Allee was blocked off by concrete barricades topped with chain link fences Erich Honecker would have be proud of. The beginning of the U5 was shut down for like a week. For what? The Formula E Berlin e-Prix car race that took place over the weekend – complete with dudes in red overalls, busty platinum blondes and free-flowing champagne. Unlike its fossil-fueled big brother, Formula-E races are silent – except for the roar of the crowd – and unsmelly. What better showcase for our E-future in which we all cruise around in uber-facilitated driverless Teslas and electric Volkswagens (if Germany ever gets its act together)?

For the last few weeks, we’ve been working on our upcoming June issue with a focus on “post-capitalist” alternatives to the current exploitative economic and social model and it’s become clear to me that the idea of switching our entire transport system to electric is going to herald some “clean” future is illusionary. Just like petrol-fueled cars, e-cars are an enormous waste of resources and pollution and environmental devastation. For one, a lot more energy goes into producing electric cars than “conventional” ones.

Second, despite Germany’s glorious Energiewende, around 40 percent of electricity is still produced by burning coal, mostly super-dirty Braunkohle or lignite. This involves enormous open-face mines in places like the Lausitz region of Brandenburg, where Vattenfall – yep, that company that provides electricity to most Berlin households, continues to bulldoze villages, ravage ecosystems and pollute the region’s water in order to fire up the massive Schwarze Pumpe power plant with lignite – the single worst “climate-killing” fuel on earth. A little over a week ago, 3000 non-violent activists from around Europe camped and staged a huge, perfectly orchestrated blockade (Ende Gelände) of one of the mines and the power plant for several days. Sadly, like most actions of the like, this heroic intervention will be forgotten in the media dinn. Insanely, despite the commitments made at the Paris climate talks last year, Germany has no plan to give up this type of mining any time soon.

Finally, electric cars, like our phones, laptops and tablets, run on lithium batteries – massive ones. And, as we all know, these come with their own range of environmental and ethical issues, the worst being the expoitation of child miners in horrendous conditions in the Democratic Republic of Congo. Don’t take my word for it, read what Amnesty International has to say about it in a recent report.

Rather than more cars on the street – even silent, pseudo-clean ones – Berlin should expand bike travel and public transport if it really wants to display some green credentials and clean up the air (which is surprisingly dirty, as we reported last November). Initiatitves like the Volksentscheid Fahrrad campaign for supercharging our bike infrastructure need our full support as, like every citizen’s referendum, it’s being systematically discredited by the city government. And how about lowering BVG prices so that’s it’s not actually worth it for anyone to drive any more?