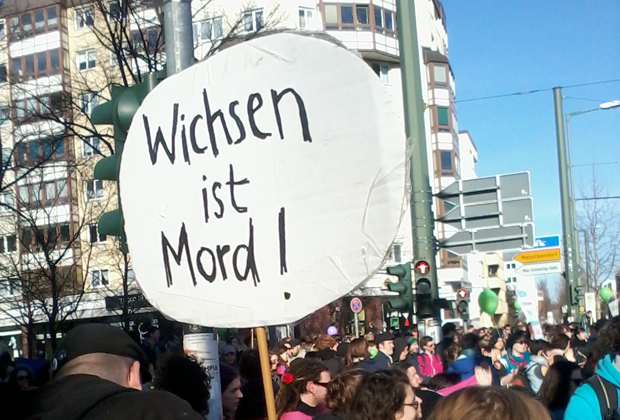 This Saturday was Frauentag. Sorry, Frauenkampftag – Women’s Day of Battle! Disguised in an old hoodie I, a 40-year-old white male, i.e. classic representative of the patriarchy, stumbled upon the Frauenkampftag Demo on Brunnenstraße where thousands of people, mostly identifiable as female, at least according to my gender-normalizing gaze, marched, screamed, held up signs, chain-smoked and, in the more boring moments (street demos like war, involve long periods of waiting), fiddled with their extensive facial piercings and smartphones. Speakers on the demo-truck raged on about why we need feminism more than ever… equality, not flowers!!!

“Equal pay for women and men!”

“The revolution will be feminist – or not at all!”

Then suddenly I heard the word “BLUUUUUUUUUUUUUMEN!!!“

A large bulldog of a woman was screaming at me. She pointed at the ground beneath my feet. I was trampling some already trampled crocuses in the median. That’s the nice thing about Germany: radical feminists have the same penchant for citizen policing as old men nostalgic for their days in the Stasi.

That encounter got me down, but my spirits were lifted by the placard in the photo: “Wanking is murder!” The catchy slogan helped me latch on to an actual current issue in the stew of anger on the street. It’s this: the CDU-controlled Health Ministry refuses to make the “morning after” pill prescription-free. One could argue on a biological-philosophical level that a man’s “wasted seed” (i.e. gillions of pathetic little spermatozoa dying in vain) is not the exact equivalent of a woman’s egg-fertilization being prevented by a hormone pill – but the analogy is eye-catching and poignant.

Germany, Italy and Poland are the last countries in the EU that still require a prescription. The problem is that the morning-after pill is more effective if taken immediately after “contraceptive failure” – so going to the doctor wastes valuable time.

It will only be just a matter of time before Germany joins the rest of the Western world on this one. Women in Germany can already sidestep a visit to their gynecologist by visiting the British-run website DrEd.com, where they just have to fill out a questionnaire. Each case is evaluated by a doctor, who can then write a prescription and fax it to a German pharmacy – all totally legal and legit.

My question is this: what’s the patriarchy’s problem with the morning-after pill anyway? Isn’t everyone against unwanted pregnancies resulting from chaotic, ‘immoral’ sexual encounters?