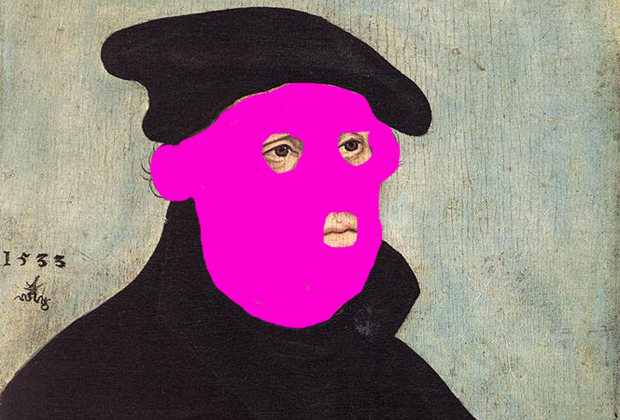 The Pussy Riot machine rolls on… the council of Wittenberge has nominated the Russian punkettes for the 2013 Luther Award for the “undaunted word”.

Wittenberge is the small city south of Berlin where in 1517 renegade monk Martin Luther nailed his Ninety-Five Theses condemning the Catholic Church’s sale of indulgences to the door of the Schloßkirche, kickstarting the Protestant Reformation.

The Luther Award is presented by 16 “Luther Cities” around Germany. Basically, it honours people who put their necks on the line to speak the truth, just as old Luther did when he defended his risky ideas to the the Holy Roman Empire’s Charles V at the wonderfully named Diet of Worms, a sort of parliament for the German-speaking lands at the time.

German theologians and representatives of the Lutheran Church have been quick to criticise the nomination. They say Pussy Riot’s “Punk Prayer” – which they performed in front of the altar in Moscow’s Cathedral of Christ the Saviour – was blasphemous and offended believers. But what would Martin Luther think of them, had he lived today?

Here’s a translation of the lyrics of their “prayer”:

All parishioners crawl to bow

The phantom of liberty is in heaven

Gay-pride sent to Siberia in chains

The head of the KGB, their chief saint

Leads protesters to prison under escort

In order not to offend His Holiness

Women must give birth and love

The Church’s praise of rotten dictators

The cross-bearer procession of black limousines

A teacher-preacher will meet you at school

Go to class – bring him money!

Bitch, better believe in God instead

The belt of the Virgin can’t replace mass-meetings

Mary, Mother of God, is with us in protest!

Okay, apart from that provocative “the Lord’s shit!” line, I don’t see anything particularly blasphemous here. The girls were simply praying to Mary, Mother of God, to liberate Russia from the dictator Vladimir Putin – while pointing at the corrupt Russian Orthodox Church’s unholy coziness with that dictator.

In his time, Luther directly challenged the corruption of the almighty Roman Catholic Church. He sparked a religious and political revolution. His weapon was the printing press, but had he lived today he would have spread his ideas on via Youtube.  Would he have supported the Pussies’ right to “pray in their own way”? Who knows? What is for sure, is that both Luther and Pussy Riot showed the bravery to speak the truth in plain view of the world.