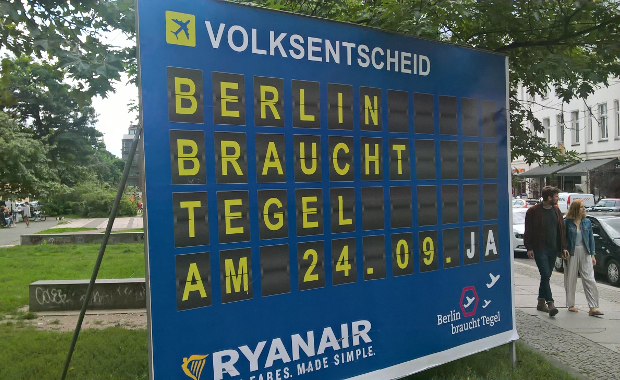 Sunday night I flew into Tegel. Sitting on the left side of the plane I had a stunning view of the skyline of Berlin: the twinkle of our iconic TV Tower, the less impressive mini-scrapers of Potsdamer Platz. As we glided down over Pankow towards the runway, I could make out a petrol station on Prenzlauer Allee. As I flew down into what felt like the middle of the city, I didn’t spare a thought for the 300,000 people below me subjected to the deafening roar of the Airbus A320’s engines, nor the noxious jet fumes being released onto their neighbourhoods.

Within 20 minutes of landing I was heading home on the TXL bus. What a dream of an airport! How convenient, how near, how small and cosy! And getting to Tegel is a dream: just a short, cheap bus or cab ride from central Berlin (15 minutes from Charlottenburg!). The journey from car or bus to plane is a matter of metres – instead of kilometres of underground travelators and endless security waits à la Heathrow. I am especially thankful for the near absence of obnoxious commerce. In most modern airports it’s hard to find the departure gates amidst the confusing maze of perfume counters and food courts. The whole Tegel vibe is 1970s groovy: the central hexagon, the retro check-in desks, the rattling vintage baggage carousels, and – my nerdy personal favourite – the observation deck on the roof that affords you a spectacular view of the runway for a few euros.

But Tegel is an airport on death row. Its fate is enshrined in law: It has to close six months after the new BER airport opens. BER, as we know, hasn’t opened on time. It’s still a giant fucking mess. As an excellent investigation in the current issue of Der Spiegel details, the history of BER – with its malfunctioning doors and non-functioning sprinkler system and thousands of kilometres of faulty cables – is a narrative of unbelievable bureaucratic and technical failure, nothing less than a huge blemish on Germany’s reputation as an advanced nation. BER might open sometime in 2019, we’re told, seven years too late.

Compared to dead-on-arrival BER, Tegel is the little airport that could. Originally designed for seven million passengers a year, the hexagonal wonder will serve more than 21,000,000 travellers this year. No wonder so many Berliners want to keep the place open.

You’ve seen those “Tegelretter” (“Tegel saver”) posters around town. The Berlin wing of the FDP, Germany’s tiny pro-business liberal party, has made Tegel its one and only issue. They’ve managed to gather enough signatures (with the unsolicited help of the AfD) to get a “Keep Tegel Open” referendum on the ballot in the September 24 elections. The FDP’s campaign is being directly supported by Ryanair with giant “Berlin Braucht Tegel” billboards. Ryanair seems interested in turning the hexagon into its very own centrally located low-cost hub. For the first time in Berlin history, the logo of a large international corporation can be seen on the campaign posters of a political party. Obviously companies constantly lobby and support politicians in return for favours, but such blatant use of campaign billboard space to advertise an airline is repulsive and possibly illegal. I hope it backfires for the FDP.

Support for the “save Tegel” referendum is around 55 percent in the Berlin electorate. For many West Berliners, it’s an emotional issue: Tegel was their gateway to the world during the “island” years of the Berlin Wall. Voting for Tegel also gives the middle finger to the governments of Berlin, Brandenburg and Germany that are simply too incompetent to build a functioning airport. Understandable but totally irrational.

Here’s the thing: Tegel is coming to a close, no matter what the FDP, Ryanair or the voters say. The referendum is non-binding. The Berlin government doesn’t have to act in accordance with its result. And the government is absolutely right. Keeping Tegel open is an absolutely crazy idea. Here’s why:

1. Tegel is close of collapse! Power cables, toilets, computers, luggage carousels are all on the verge of falling to pieces. Renovations would cost at least €1 billion.

2. Noise pollution. Have a heart for the 300,000 souls who have to live with the permanent thunder of jet engines overhead.

3. Inner city air pollution. Thought diesel was a problem in Berlin? Jets spit out a cocktail of NOx and other crap. Not nice for the people living near an airport.

4. Aforementioned residents living in the flight path and environmental groups would unleash a tsunami of lawsuits upon the state of Berlin because closure was promised years ago. The resulting financial costs would be staggering and impossible to predict

5. Despite what the FDP, AfD and Ryanair are saying, BER in combination with the old Schönefeld Airport will have enough capacity even if Tegel closes – while BER is steadily expanded to meet growing demand.

6. But as air traffic grows and grows, Berlin and Germany should do all it can to phase out short flights to places like Prague, Cologne and Munich in favour of high-speed rail, which, compared to countries like France, seems vastly underfunded in Germany.

7. Tegel, once laid to rest, will be reborn as a technology park with space for start-ups, a university and 9000 flats. And another Tempelhof-style open field.

Tegel, we love you, but it’s time to say goodbye. Your days are numbered.