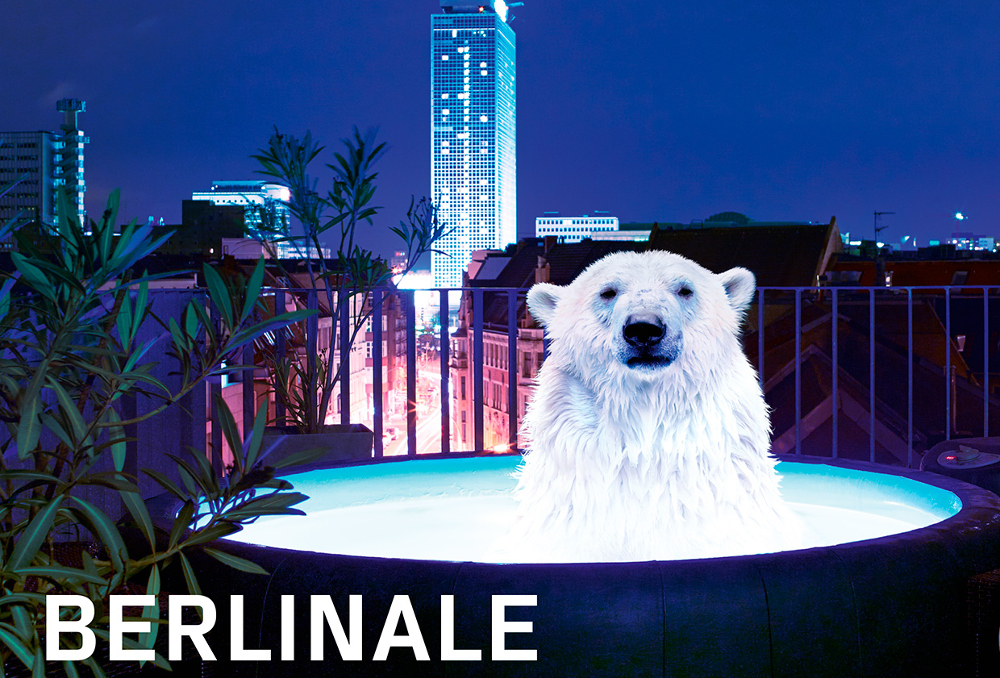 The cover of this year’s Berlinale Journal, the festival’s in-house magazine, as well as some of the posters, features a polar bear soaking in a hot tub on a rooftop, with the Berlin skyline in the background. The Berlinale loves to present itself as progressive, political, and so Dieter Kosslick explains the rather silly image as such: “The polar bear is sitting in a whirlpool! If global warming continues, the jacuzzi is going to fill up quickly. We hope that people gradually realise that it’s high time to stop the melting of glaciers.”

Dieter, I’m not a film critic, so I don’t have much to say about the quality of this year’s Berlinale films, but I can smell bullshit. Your main sponsor is Audi, which belongs to Volkswagen. Audi is VW with a different logo and a fancy image. And as the world’s largest car company VW is responsible for a whole bunch of global warming. And melting glaciers and polar bears – which prefer ice-shelves to hot tubs – going extinct.

But it’s much worse than that. VW is the company responsible for the “biggest industrial scandal in the post-war era” (Hamburger Abendblatt). Yes, that thing with cheating during emissions testing. A scandal in which a top VW manager of VW USA was convicted to seven years in prison. In which VW has paid and continues to pay billions of dollars in fines in the US and elsewhere. To this day VW flogs “clean diesel” SUVs – as inhabitants of cities around Europe and the world have to live with levels of NOx emissions that regularly exceed any sort of health standards. And if that wasn’t enough, the latest chapter of the VW scandal involved emissions testing on monkeys and humans. VW had both members of species of primate inhale diesel fumes for hours in order to convince the world that the diesel pollutant NOx is harmless stuff.

Most of the above broke a couple of years ago, but still you asked Audi to be your “Official Automotive Partner” in 2018. Apparently, “Audi drives the film stars up to the red carpet in style,” according to the website, although most of the stars could walk because they’re all staying in hotels on Potsdamer Platz. They’re probably contractually required to sit their arse in a NOx-and-CO²-belching SUV to travel the two hundred metres to the red carpet or to get interviewed in the Audi Berlinale Lounge, a Borg-style temporary building actually blocking the view of the Berlinale Palast. It’s not greenwashing, it’s glamour-washing.

Dieter, during Berlinale, Potsdamer Platz becomes even tackier and more commercial than usual – thanks to the corporate sponsorship you’ve ruthlessly pursued over the last 17 years. The advertising posters everywhere, the corporate “lounges”, the giant video walls screaming sponsor messages. The muscle cars. It’s too much.