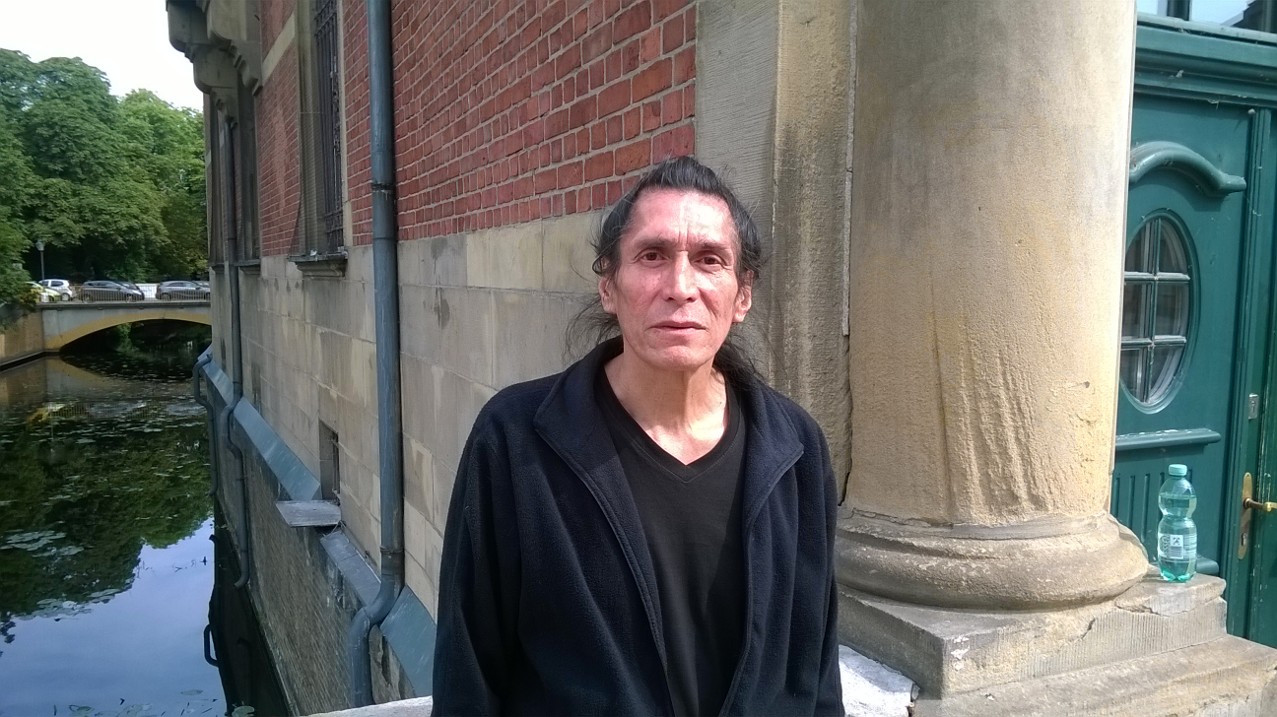 Justice or farce? The strange tale of the Sioux Indian artist convicted of giving a Hitler salute in Berlin

For 15 years, American artist Robert Packard, 61, has lived in Spandau in north western Berlin. For most of that time he was a member of an artist’s association called the Arbeitskreis Spandauer Künstler Berlin e.V. (ASK), which provided a studio in which he could both work and live. Packard sold his sculptures to galleries around Europe and the world and would pick up extra work as an actor and model. He led a quiet life, working every day, never had any problems with anyone.

But today the life he built up for himself in Germany has been turned into a nightmare. He’s lost his home and studio, and potential employers won’t hire him any longer due to his legal record.  His crime? In June Packard was found guilty of giving a Nazi salute during a conflict with members of ASK. What’s absolutely extraordinary about his case: he’s probably the first Native American to be ever be convicted of a far-right crime in Germany.

Packard is a Sioux Indian from the Yankton Reservation in South Dakota. His life has taken him around the world from there to New Mexico to Paris (where he married) to Israel and finally Berlin, where he arrived 15 years ago. En route he was stationed with the US military in West Germany, saw combat in the Vietnam War, spent 12 years living in Paris where he worked as a model. He has a 29-year-old daughter who lives in London.

About 15 years ago, Packard had been travelling around Europe and ended up in Berlin with little money. He became acquainted with a group of artists who offered him a studio in the city-owned former customs house which used to lie on the border between Spandau (part of former West Berlin) and East Germany. For over a decade, Packard worked as a sculptor there. In exchange for performing duties as the studio house’s Hausmeister (maintenance man), he was able to live and work in the building for free. To make ends meet he also acted in films like Sonnenallee and Der Schuh des Manitu. He’s appeared in commercials, worked the door at posh events where an Indian greeter in full dress is desired and still attends pow-wows across Europe, from Poland to Italy. He’s always been treated well in Germany, Packard says. Never had anything to complain about.

Till a couple of years ago. That’s when according to Packard the executive committee of ASK started getting hostile towards him. The association had ever more become a “drinking club” for a group of friends, from which Packard, who no longer drinks alcohol, was excluded. He says the three member Vorstand (executive committee), Hella Zarski, Karin Schultze-Göthel and Ursula Keil, began to verbally harass him. They hung a picture of an African tribesman with a bone in his hair outside his door – an obviously racist gesture. The trio of the Vorstand escalated their threats. They removed possessions from his studio, denied him access to tools belonging to the association that he needed for his work. He was fired from his job as Hausmeister and replaced by Isabelle Irrgang, a personal friend of Zarski who was given a studio in the building, even though she wasn’t an artist, according to Packard. Why did they do all this? It’s not really clear – the Vorstand could not be reached to comment – and other members of ASK declined to talk to Exberliner when reached by phone.

In May 2013, Packard says, the provocations culminated in some of the Vorstand members destroying the two-metre wide medicine wheel he had installed in the courtyard of the building, tearing the sacred sculpture out of the ground, even driving over it. “This was a religious altar, which I prayed at every day. They knew exactly what it meant to me,” says Packard.

Later that day, the dispute escalated: “Backed up against the wall, in a corner in my studio, I told them they were acting like fascists, like Nazis. And I raised my hand in a Hitler salute and said ‘Sieg Heil!’”

In the coming days Packard pressed charges against the group for destroying his property. In retaliation, they filed charged against him for insulting them and doing Nazi salute, illegal in Germany. They also got a court order to get him evicted from his studio and served a Hausverbot, i.e. he was banned from entering his own studio and apartment for many years. The police showed up and forced him to leave without a chance to pack his possessions and tools. After complaining to the culture department of Spandau city hall – which is responsible for the studios – he was given four hours to remove his things from the studio – but a full eight months after being kicked out. Since then he has been unable to work on his art, he’s lost his living space, and has been reliant on the generosity of friends. Due to his removal from the artist’s group, he’s also been kicked out of the Künstlersozialkasse. He manages to keep himself above water through odd jobs, and refuses to sign on to Hartz IV welfare: “I’ve never taken a cent in government money in my life, and never will.”

In June, in a trial that took just a few minutes, the judge found Packard guilty of using a symbol of a banned political organisation (the Hitler salute) and told him, “You can’t insult people in this fashion.” He was sentenced to pay a €300 fine or do 90 hours of community service.

Packard is dumbfounded by the conviction: “In America there is something called the spirit of the law! This law was enacted to prevent the return of the Nazi party to power. I’m an American Indian!  This is ridiculous. The judge refused to recognise that there were extenuating circumstances. It’s like charging a black man in America for wearing a white sheet! It would be laughable if it wasn’t so serious.”

Now Packard is in a precarious situation as an immigrant with a criminal record. The conviction showed up during a background check, leading him to lose a well-paid job as a greeter at the US Embassy on Fourth of July. He’s had to sell possessions and borrow money to pay €450 in legal fees. He’s currently unable to rent a flat and is sleeping on a friend’s couch.

Meanwhile, the charges he filed against the members of ASK who destroyed his medicine wheel have been dropped because “they weren’t in the public interest”. Packard claims former policemen and an ex-judge are involved in the art association, so the law isn’t exactly on his side.

Today, Robert Packard is determined to get back on his feet and rebuild his life in Germany. He’s appealing the judge’s decision, despite his financial problems and his lawyer’s pessimism that the next judge will find him as guilty as the first. So far the German media has been uninterested in the case: “They don’t want to have anything to do with this story…”