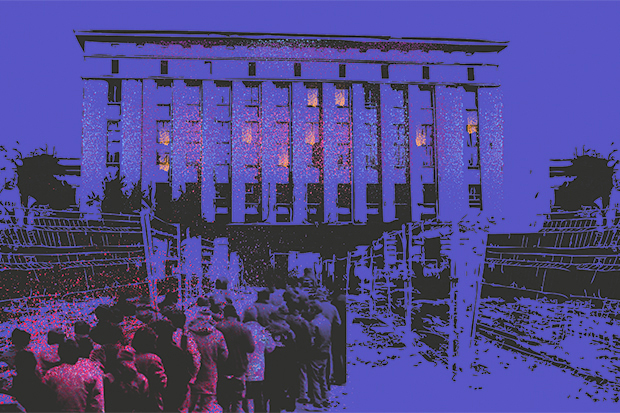 You read it in the news this autumn: a court decision dubbed Berghain “high culture”, granting the club the same tax breaks as operas and classical concert halls. A funny story… but not exactly true.

With its imposing façade, famously inscrutable door policy and tales of inner goings-on that resemble urban legends, techno behemoth Berghain has held Berliners, international clubbers and headline-hungry journalists in its thrall ever since its 2004 opening. Even as the club hits its 12-year anniversary, that fascination only seems to be increasing, with even the most mundane Berghain-related news item (someone sold a drinks menu on Ebay for over €50!) making the viral rounds. One of the latest: on September 6, the Berlin-Brandenburg Financial Court in Cottbus ruled that the club’s admission fees would only be taxed seven percent, the same discounted rate as theatrical performances and concerts, rather than the standard 19 percent VAT applied to clubs, bars and the entertainment and gastronomy industry as a whole. The image of monocle-wearing classical connoisseurs amid the drugs and darkrooms was too good for the media to pass up. Der Spiegel and Die Zeit trumpeted that “Berghain is high culture!”, while even The Guardian reported on the case, stating that “A court decided … Berghain produces works of cultural significance.”

The fact of the matter is, “high culture” had nothing to do with the case. The court made its ruling based on a single sentence in Germany’s VAT Act, section 12.2.7a, which states that “the admission to theatres, concerts and museums, and comparable performances” is eligible for the lower tax rate of seven percent. This means all concerts, from classical to hip hop to Schlager. The Kantine am Berghain, the indie concert venue next to the main club, was already paying the seven percent before the court ruling. So was Berghain itself, for its occasional weekday shows by the likes of John Grant and Grimes. It was just the mammoth weekend club nights that were up for debate, the question being: is a DJ performance equivalent to a concert?

In fact, it used to be. In 2005, shortly after Berghain opened, Germany’s highest financial court ruled that “a techno event can be a concert” as defined by Section 12 of the tax code, because DJs were able to produce “a sound sequence with its own imprint” via scratching and mixing. And so the club, like all clubs in Berlin, paid the seven percent tax rate for six years.

But in summer 2011, the tax authorities changed their tune. By then, Berlin’s reputation among tourists as a hedonistic nightlife mecca was in full swing, and the Finanzamt began to suspect music might not actually be the main draw at the city’s clubs. Ruling that DJ nights would henceforth be classified as “entertainment” subject to the usual 19 percent VAT, they also demanded that the clubs provide back payment for the previous six years. While Berghain won’t disclose its finances, using the club’s admission fees (€12-16 over the years) and 1500-percent capacity, we can estimate that the tax difference would have come to as much as €200,000 per year. No wonder that, following an audit in 2014, the club decided to fight back.

The club recruited the Berlin law firm Raue LLP to make their case. One of the firm’s tax lawyers was Friedhelm Unverdorben, a classical music fan with little knowledge of house or techno. To help him in his research, Berghain’s owners educated him with a golden ticket: a guest list spot and a personal tour.

One summer Saturday evening at 11:30pm, before the music had begun churning from the famous Funktion-One speakers, Unverdorben entered the hallowed passages in Friedrichshain. “The music started very slowly, but when I left at 4am it was really getting crowded and the music was faster…” he describes. “It was interesting how it developed, like choreography. It’s a special experience.”

He took note of audience reactions. “The people are really connected to this kind of music. It reminded me of a jazz concert, where you have these solos and someone is blowing the trumpet and in the middle of the piece people applaud. Yes, they’re coming there to have a good time, but first and foremost they’re coming for a special kind of house or techno music and a special kind of DJ. It’s the same as if you go to Rammstein or Bruce Springsteen. What is decisive for this kind of case is the music needs to be the focus of the whole night – and I think it was.”

But Unverdorben is not the only tax specialist to have hit the dancefloor. In their case against Berghain, the Finanzamt cited their own eyewitness evidence: clubbers weren’t facing the DJs (and many of them were obviously “on drugs”), there was no official “stage”, the music had “no discernable start or end”, and the bouncers sent over half of the would-be attendees home. All arguments were beside the point. Unverdorben compared Berghain’s inaccessibility to the 10-year waiting list at the Bayreuth opera festival.

In the end, says spokesman Jens Metzger of the Berlin tax office, Berghain’s club nights were judged as falling under the “comparable performance” category – not unambiguously concerts, but similar enough that they could be taxed in the same way. A DJ who has played the club several times concurs: “It isn’t exactly a live performance, but when you go watch a really talented DJ who can perfectly blend various styles into a four-hour or more set, it really is similar to that of a concert – just using different tools.”

What about other clubs?

The precedent set by Berghain means other Berlin clubs with quality DJs may be eligible for the same discount. “It would be unfair if other clubs where the DJs’ performance is the centre of the evening did not get this reduced rate. I think they have good chances,” says Unverdorben.

Mitte club Cookies lost the same case in the same court with the same judge several years ago, shortly before its 2014 closure. Markus Jänsch, managing director of CHG, the company that owned the club, says: “Berghain has big-name DJs and it is famous, more of an institution. We had good DJs and sometimes big names, but not as much.” However, Jänsch is still interested in the Berghain case as the new ruling means that CHG – which still runs restaurants Crackers and Cookies Cream in the building once that housed Cookies – may be eligible for refunded taxes from its 2011-2014 payments. “In due time, our tax lawyers will be looking into the ruling to see whether we can appeal and make a claim against the Finanzamt for the years when we paid more tax.” Berghain may also be due some money in back payments.

Cookies is not the only club pricking its ears to the ruling. According to Club Commission chairman Olaf Möller, at least 40-odd clubs across the city may be eligible for the tax reduction, although they will have to appeal for it on a case-by-case basis. “At the Club Commission we’re very happy that a club won against the tax authorities in court,” says Möller. “But there are three things to be aware of: One, every club will be individually checked by tax authorities – that’s German law. Two, we still don’t have the written court decision, so we still don’t know if and how this decision can help other clubs. Three, we also don’t know if the other side, the tax authority, will appeal the decision. But that difference of 12 percent would really help our city’s clubs and electronic music festivals.”

It’s worth mentioning that there is still a significant difference between the way “high” and “low” musical culture is treated in Germany. The music rights society GEMA, for example, grants much higher royalty payments to opera and classical music (“Ernste Musik” or “serious music”) than to rock, pop and techno (“Unterhaltungsmusik” or “entertainment music”). And under another section of German tax law, orchestras, choirs and chamber ensembles like Berlin’s Philharmonic are eligible to pay no taxes on their admissions whatsoever. But it’s not like the city’s club nights need that kind of help, Berghain least of all – they make at least €24,000 per weekend from admission alone, and likely two or three times that in beverage sales. Whether high, low or mere “entertainment”, Berlin’s most notorious club is doing just fine for itself.