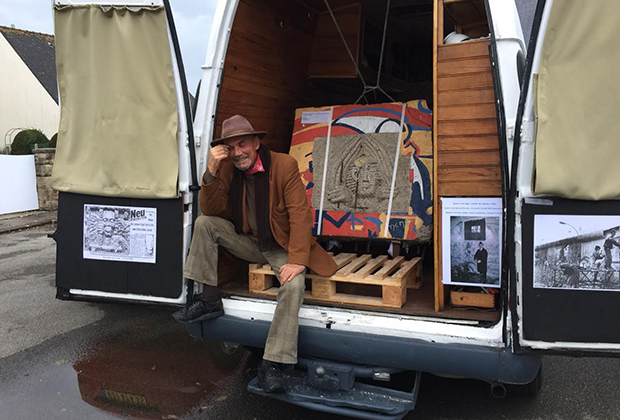 On the 25th anniversary of the Mauerfall, a French Breton who managed to sculpt into and remove a piece of the Berlin Wall from Checkpoint Charlie 25 years ago returns on a pilgrimage to bring his artwork back to its origins.

With a red bandanna tied around his neck and a wide-brimmed felt hat, Jean-Yves Menez, a 62-year-old artist based deep within the French countryside, looks a bit misplaced amid the hustle and bustle of Kottbusser Tor. He arrived in mid-October, after driving all the way from Dinan, Brittany. “I came here without a plan,” Menez says. No plan, but a grand mission: to bring his personal hand-sculpted piece of the Berlin Wall back to the fatherland.

Carefully placed on display within Menez’ white van turned makeshift camper, leaning on a hand-built breakfast booth that converts to a bed, the 350kg slab of concrete features a human face making its way out of what looks to be a vulva, with an all-seeing eye in the centre and a seemingly misplaced ear. “These details are to emphasise the five human senses, but more importantly this sculpture represents the idea of human passage.” Before now, the French sculptor had been carting his artwork, dubbed “Le passage d’homme”, around to various schools in Brittany. Today, his aim is to “to gauge people’s reactions and bring the piece back to its original location.” 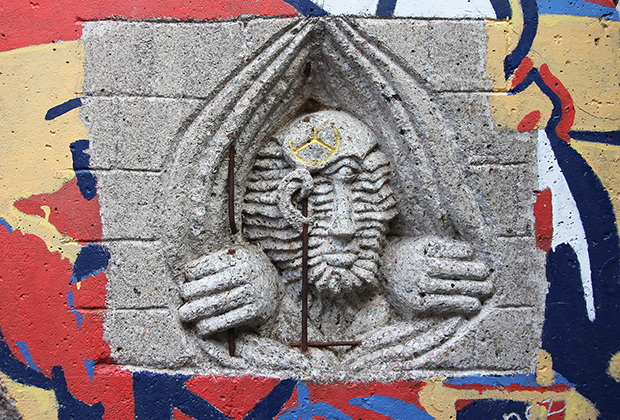 The last time his piece of the Wall saw the city was nearly 25 years ago. When the Berlin Wall fell, Menez, then in his late thirties and having recently turned his hand to sculpting, resolved to come to Berlin to complete an art piece unlike anything anyone had ever created before. He arrived in December 1989 with little more than a backpack of tools. Selecting a spot on the Wall near Checkpoint Charlie, Menez started to chip away alongside thousands of other Berliners.

He finished the piece within a few days, then left Berlin. But a mere three weeks later, Menez was told his sculpture had been destroyed. An admirer of his work financed his trip back to Berlin that January, this time with the aim of creating an everlasting masterpiece. “I was haunted by the Mauer and my destroyed piece. I had to go back!”

With the atmosphere in Berlin still teeming with excitement throughout that first month of 1990, Menez once more took up his post at Checkpoint Charlie, joining the masses of “wall-peckers” scurrying to gain their own piece of the Wall before the GDR police could catch them. This time, though, he garnered a throng of instant cult-like followers and the attention of several publications, including Berliner Zeitung and Tagesspiegel. “I didn’t plan what I would sculpt, the inspiration just arrived to me as I went along. I felt that it was a time of great passage though, not only for me, but for the citizens of this city.” After a week of work, the authorities caught on. “The GDR police showed up and were about to arrest me, but when they saw the Swedish press covering my work, they reconsidered and told me that I had three hours to finish what I was doing and get out of there.” In a scramble to hash out his masterpiece, West Berliners and East Berliners alike united with Menez, supplying him with ropes and other tools to cut the sculpture out of the Wall. “At the end of it all, I took one last look through the square piece we cut out from the Wall and down into East Berlin. The East Berliners were standing there smiling up at me. In that moment I knew that I had contributed to open a window of hope in a wall that had oppressed too many for so long.”

Menez is about to have fulfilled his mission. This weekend, “Le passage d’homme” will be on show on the pavement outside of the Wall Street Gallery – an art space conveniently located right by Checkpoint Charlie, Nov 7-9, 10am-7pm.