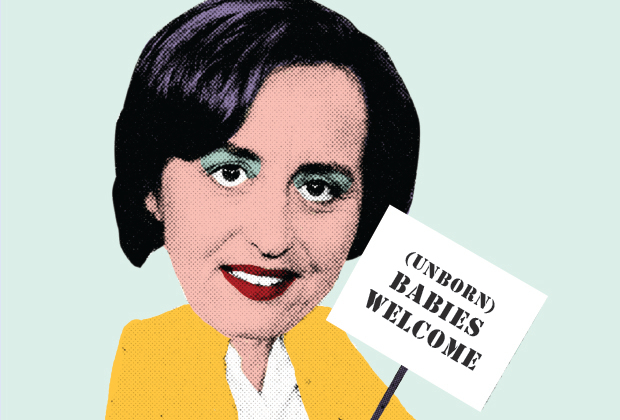 While France stands on the precipice of electing a right-wing populist to office (the French say “oui” or “non” to National Front’s Marine Le Pen on Sunday, May 7), Berlin has its woman on top here in Berlin. We spoke to the AfD’s Beatrix von Storch, the most controversial female politician in Berlin, about Muslims, Merkel, motherhood and more.

AfD is predominantly a testosterone-packed affair – nearly 90 percent of its core members and 85 percent of its voters are men. Not surprising for a party promoting “family values” and calling for the emancipation of women… through motherhood. What’s more surprising is that it is represented at the top by such high-profile women. Frauke Petry, the party’s national face, is the most famous example, but there are more, right here in the Hauptstadt. AfD has three women in Berlin’s parliament, including Kristin Brinker as its faction’s vice president. Unlike Marzahn colleague Jeannette Auricht, Brinker stands for the liberal wing. A successful businesswoman open to the LBGTQ cause, she sees no contradiction between her party’s ideology and her own liberal convictions.

Beatrix von Storch is a special case. A prominent figure in the party – she has a seat in the European Parliament and will be heading the Berlin list in September’s parliamentary elections – the 45-year old aristocrat has come to stand for the fundamentalist Christian wing of the AfD. Her high fight against the “early sexualisation” of children (basically, sex education in schools) and lobbying for pro-life policies have made her the German flag-waver for ultra-conservative family values.

A successful career women who swears by women as mothers, but has no kids? An anti-abortion, pro-family feminist? Like Marion Le Pen in France – Marine’s homophobic, pro-life niece – Von Storch doesn’t seem to be bothered by paradoxes.

What drove you to politics?

I’ve been active in politics for 20 years without being a member of any party or any parliament. I set up a movement: the Civil Coalition, a coalition of ordinary citizens who didn’t want to participate in a party, but wanted major changes. I thought that the political parties would not take care of the changes we need. They’re only focused on the next election, not the real problems we have.

So what would you say is the real problem in Germany right now?

Over the last 20 years, we’ve been facing a major demographic change in our society which should have forced us to change our politics a generation ago. Ten years from now, our social welfare system will simply go bankrupt because so many people will retire, leaving fewer children behind. I realised that political parties were not addressing this problem.

You’re referring to Germany’s sinking birth-rate and concurrent ageing population… How to boost births, then?

First, we have to have an open debate. Change has to start with awareness. Our system depends on millions of workers who have not been born yet – we have to realise that this a problem. If your question is: do we want to force people to have children? The answer is “No”. I don’t think it’s possible.

You don’t want to force anyone to have kids, but what about policies that encourage childbearing? You’re famous for your family values…

When I focus on family values, I want to make people acknowledge that families bringing up kids are doing it for society. This is something that has to be honoured and valued. We need parents who can take care of their children so they can go to school, sit in a chair for 45 minutes, and are not in need of three nannies to teach them basic discipline and prevent them from beating each other up. Kids need parents at home in order to learn the roots of basic social behaviour.

Is being a mother a full-time job that society should remunerate?

Being a mother is a real job, but it doesn’t have to be paid. I think the tax burden for our families is far too high, and I want to reduce that burden so families can live better. I also want recognition for childraising as work when it comes to pensions.

Are you against abortion?

In our existing law, abortion is a criminal act, only legal as an exception. But it remains more or less the opposite of “human rights”. I support a Willkommenskultur for the unborn, and I’d like to point out that those who talk about abortion have already been born. Our culture should be a culture of life that protects life.

Do you consider yourself a feminist?

It depends on how you define a feminist. Probably not in the way it’s defined nowadays, but of course I stand up for women’s rights. The right for women to work and gender equality, for mothers specifically. It’s a 24-hour job for years and years, without being paid, without holidays, but it’s hugely important to society.

What about women’s rights outside motherhood? You’re a successful working woman with no children yourself. Do you believe in gender equality – equal pay, for example?

I’m in favour of equal rights, but I’m against quotas. Statistics show that women are paid 20 percent less, but I don’t think it is because of gender discrimination. They just have different jobs, different experiences. Because they have kids and want to be with them as mothers, they have different careers.

Speaking of mothers and Germany’s demographic problem, do you think that immigration could be a solution?

Many immigrants have lot of kids… We don’t need many people; we just need people who are educated and highly qualified. We don’t need millions of people who can’t read, write, or speak our language in our cultural framework or job market. Of course some of them will succeed in having a good career, but I’m talking a tiny minority in the end. The vast majority will not be able to pay into our systems.

But isn’t Germany a wealthy country – the wealthiest in Europe?

For a reason. The reason we’re wealthy is not because we’re taking millions of people from the rest of the world. We’re wealthy because the people we have here work hard and spend little.

Would you be in favour of selective immigration, i.e. only letting in the qualified, productive ones?

Sure, this is completely different. Our programme calls for a reform of immigration law, so that we can choose who we want to have with us. At the moment we’re getting illegal migrants in our country claiming they’re refugees, which they are not. Of course we want to help refugees, but immigration is something different and we need a law for it.

So you do believe in granting asylum to people who need it – those who are running away from war, for example?

Yes, we should help. As you said, we’re a wealthy country. We want to help, but we can help much better if we stop thinking we can let everyone into our country. This is not the way to solve poverty and war. We would make better use of our money if we helped people in or near their own countries. There are lots of safe places closer to Syria. There is no need to come to Germany, Austria or Sweden.

Are you happy with Merkel’s policy now that she’s closed Germany’s borders? Her deal with Turkey, for example, is that something you agree with?

We don’t agree with the Turkey deal, because we don’t want our borders to be protected by an Islamic dictator who is killing people if they try to cross. We want to protect our own borders; we don’t want to have that handed over to Turkey. We are asking our chancellor to make a clear political statement that we won’t take any more people. There are people from north and central Africa who are fleeing, millions more from the Middle East… but coming here cannot be the solution. We are asking our chancellor to send out a clear signal.

But what to do with the people who are already here?

The majority of the people are illegal migrants, so we’re obliged to deport them.

How will you make them leave?

If we realise we have hundreds of thousands of people without a reason for asylum – this is official knowledge – they have to leave the country. They came here by foot, so there will be a way to return them to their homelands by bus or plane. I know it’s difficult to make them leave.

Angela Merkel also said they have to leave; she said we have to close our borders and she has done so already. Ask Merkel if she’s racist, ask Merkel if she’s xenophobic! On September 12, 2015, our government had made the decision that we’d close our borders and stop anyone else from entering our country. But at the very last minute, Merkel didn’t want to take responsibility for the not-so-nice pictures of thousands of immigrants stuck at the German border, so she let them in. Again: she didn’t want to be responsible, but she knew she had to protect our borders. She knew we were unable to take all the migrants and no one’s asking her if she’s racist or xenophobic.

So you’re in line with Merkel?

In this respect, yes, we’re in line with the chancellor. The difference between Angela Merkel and the AfD is that it was the chancellor’s responsibility to protect our citizens. We would’ve done so, but we were not in charge. To be clear, I’m not xenophobic and I’m not racist. I am just very clear that the country has to protect its borders, keep its rules and protect the law. This is what I’m asking the government to do.

You’re a religious person. Do you think that Islam has a place in German society?

Islam in most interpretations has a political claim for power which does not align with our values and our constitution. I believe in religion as a private belief, but Islam can also organise the law, society and the whole lives of its people, which encompasses far more than just the private realm of personal belief.

Religious Muslims also have strong family values, like you do – isn’t that compatible?

Their personal beliefs are compatible. But when it comes to civil law, family law and punishment according to sharia, for example – no, it is not in line with our constitution.

Born in Lübeck in 1971 as Duchess Beatrix Amelie Ehrengard Eilika of Oldenburg, Beatrix von Storch apprenticed as a banker before studying law in Heidelberg and Lausanne. She moved to Berlin in 1998. A lifelong activist, she has participated in anti-abortion marches, campaigned for the return of East German estates lost in the wake of World War II and brought a series of high-pro- file lawsuits against the European Central Bank. Together with her husband-to-be, Chilean Sven von Storch, she founded the Zivile Koalition (Civil Coalition) in 2006, a tentacular online lobbying organisation running campaigns, blogs and a donation platform (interestingly, all seven founding members are part of her family). She was attacked with a pie by left-wing activists over her February 2016 comments on using firearms to fend off refugees at Germany’s borders, including women and children. She later admitted she’d “made a mistake” and apologised. An AfD member since shortly after the party’s 2013 creation, she won a seat in Europe’s parliament in 2014 and will be leading AfD’s Berlin list in September’s elections.