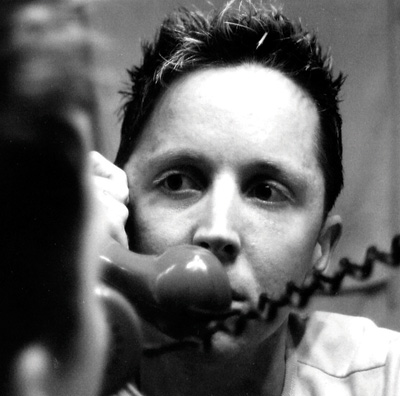 Installment number five from our re-run of The Gay Berliner Column. Here, Maurice ponders the sameness in different people of the same gender. From issue #46, January 2007.

‘You both look identical,’ slurred the Irish tramp on Rosenthaler Platz, waving his doner kebab with a flourish and a hiccup. ‘Are you two brothers?’ As Thilo and I had just spent the last five hours snogging, I rather hoped not. More likely, our new friend was simply seeing double after a few too many Apfelkorns. But then, under the inspiring influence of excessive alcohol, he had hit on something that got me wondering: that in fact gay couples often do look scarily similar. As I write this, amid the prams of a Knaackstrasse café, I am looking over at two identical Swedish blond men at the next table: From the way they are touching each other (apparently unabashed by the presence of minors) they are clearly not related. Either that, or Scandinavia is even more liberal than I thought. There is of course the cliché that butch dykes go along with femme lesbians. Or the widespread theory that a flaming queen generally lands a straight-acting partner. But in reality something so narcissistic that it is almost masturbatory seems to be more common: gay people preferring a mirror image.

‘I can’t tell either of them apart,’ my father said when he met John and Michael, who both favour T-shirts a couple of sizes too small and have the glossy, pampered looked only gay men can ever feasibly pull off. But then, as my father has a tendency to get his own sons mixed up, he’s probably not the most reliable of sources. Or there are my two 75-year-old lesbian neighbours, who both have grey hair and sensible shoes – admittedly this is not unusual for any 75-year-old woman, but I have the feeling that over the decades they have slowly been turning into the same person. Oli confirmed my theory saying that he and his boyfriend David are always being told that they look too similar.  ‘But David is blond, tall and has a great body, while you are dark, and … well, dark,’ I replied, quickly remembering that Oli’s positive self-image was remarkably well developed, and was best left intact. Clearly part of the issue is that if you fancy someone it is always flattering when someone says you look like him. But what Oli and David at least do have in common is the Möbel Olfe beard. In fact, for Oli, no relationship is ever conceivable without copious amounts of facial hair – a political statement of sorts.

When looking at a couple deemed to be similar, it seems that most people bypass minor incidental features (such as the face) and look simply at the style and dress sense. Something which most of us do, when looking for a partner – in the hope that the cut of the jeans or type of sneakers will reveal compatible inner values. For gay Berlin men two classic examples would be:

1) Tight clothing + pumped up muscles + glossy appearance = obsessive commitment to the gym, relaxed approach to artificial stimulants and whole-hearted enjoyment of material commercialism. Would support the FDP, while claiming to vote Green.

2) Second hand clothing + skinny body + facial hair = creative bent (or at least appearance thereof), rejection of consumerism in favour of intellectual and artistic pursuits and occasional reader of the TAZ. Would also claim to vote Green. But would probably be too stoned to get round to voting at all.

Clearly type one and type two are unlikely to be attracted to each other. Pretty much in the same way that in the heterosexual world a Gucci-clad high-heeled investment banker and a pot-smoking squat-dwelling artist will probably not make the best couple. Maybe it’s not necessarily that gay couples look like each other. But rather that in the ideal partnerships, they just happen to think like each other.