Walter Crasshole empties his fag bag and vents on the issues of the day. This month: Does “queer” still mean anything in Berlin?

Last month, I was tickled pink to open a PR email from something called “Berlin Queer Days” happening in July. What was this strange event that I, in all my years on the scene, had never heard of? The logo in blocked pink and black lettering was almost too perfectly designed. Further reading revealed that this was some kind of festival, with an unspecified, “family-friendly” entertainment line-up and a primo location… on Potsdamer Platz. I don’t even know straight people who hang out on Potsdamer Platz, let alone queers, gays, dykes, what have you, let alone on the same weekend as Motzstraßenfest, the annual street bash in Boystown, Schöneberg. The involvement of Bob Young, the gay club kingpin behind GMF, was also a red flag. Clearly, it seems someone has picked up on the fact that “queer” equals cool.

Queer is many things in this city. Berlin’s queer magazine, Siegessäule, officially added the word to its tagline in 2005 as a gesture of inclusivity – a unifying factor in a scattered scene. But the same fluidity and elasticity that make “queer” beautiful also invite anyone to take advantage of it.

Especially in Berlin, where “queer” has become an aspirational fantasy. For hordes of young expats who come to this city to live out their decadent dreams, queer is a cool identity to try on like a black mesh tank top, something to flaunt and show off to your friends on Instagram as you leave About Blank or Berghain. A way to spend that trust fund and think you’re giving the bird to your bourgeois parents.

But what to do? The word’s gone from something radical to being a lifestyle. Just envision a world full of Queer Mate, Queer iPhones and Queer Cigarettes. We’ll walk down the street in our Queer Black Jumpers on our way to Sony CineQueer for some queer film in QOV. Could be a utopia, if you’re into that sort of thing. Or we could end up being the great marketing swindle of the 21st century.

So has queer lost its radical edge entirely? Depends on what you define as radical, but just last month in an Exberliner interview, feminist blogger/journalist Hengameh Yaghoobifarah asserted that Islam was queer before it was colonialised (I don’t believe any religion can be queer, but it’s certainly a radical statement). And then there are characters like my punky friend Mad Kate, who’s basically a living work of queer art. From her co-parenting triumvirate with two queer artists to her relationship with her genderqueer lover and band partner Tusk, she’s seemingly queered every aspect of life.

“Queer bleibt radikal!” is actually half of the slogan of X*CSD, this year’s Kreuzberg CSD alternative – forever changing its name, but hell, you have to keep it fresh – happening June 25 on Oranienstraße (see map below for full route). The other half is “Yalla auf die Straße!” Go out into the street! So forget about Berlin’s hipster legions and “Queer Days”. Head over to Kreuzberg 36 and witness for yourself that the word still means something for some of us, and we’ll keep living it as long as we can. 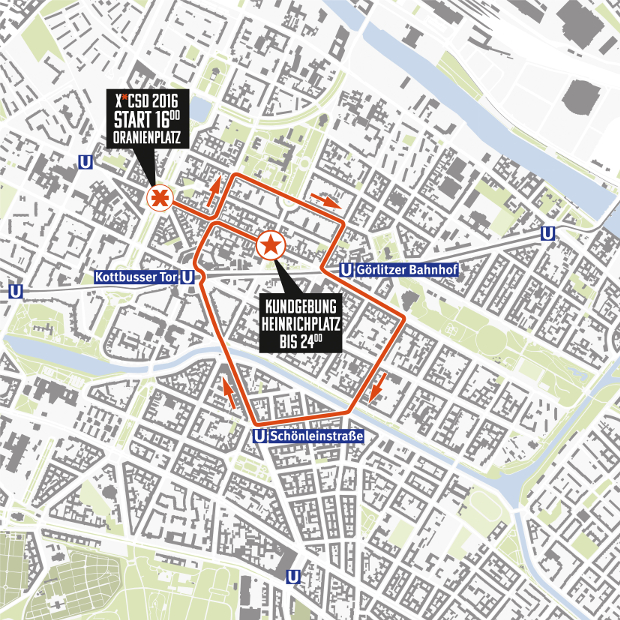