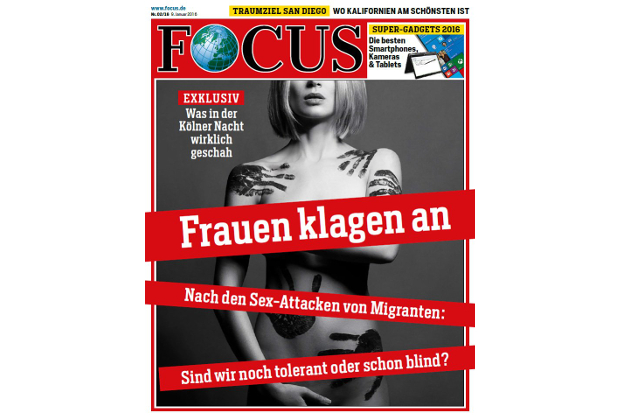 So it seems since last week the entire German press has decided it is very feminist, and was all along, and then pretended to wonder why no one had noticed before. It was a bit clumsy though. I’m not saying the Focus magazine editors are all subconsciously Nazi teenage boys, but they managed to print the exact sexual fantasy of a Nazi teenage boy wondering if pretending to be feminist might be a good way of attracting women – black handprints over a sexy naked white blonde woman (photo). They’d probably take Cybill Shepherd to see a porn film on their first date too.

Women have also got the CSU on their side now, whose general secretary Andreas Scheuer said last week: “Whoever doesn’t accept the rules of our co-habitation, and doesn’t accept our respect for women can’t find a place in Germany in our society.”

I reckon this sudden confluence of concerns between feminists and conservative Christian Germans is a great opportunity to finally get around to passing some measures that could’ve been done decades ago. They were probably just too busy. For example, now would be a good time for the CDU and CSU to ratify the Council of Europe’s Istanbul Convention Against Violence Against Women and Domestic Abuse.

Germany became the one of the first countries to sign this in 2011, but it has yet to implement the ruling in law, because of a blockade by the conservative end of Germany’s coalition (who, by the way, voted against making rape a crime within marriage in 1997). The convention says:

Parties shall take the necessary legislative or other measures to ensure that the following intentional conducts are criminalised:

b) engaging in other non-consensual acts of a sexual nature with a person;

c) causing another person to engage in non-consensual acts of a sexual nature with a third person.

2. by threat of imminent danger to life or limb; or

3. by exploiting a situation in which the victim is unprotected and at the mercy of the offender.

Many women’s groups, as well as the Green party, the SPD, and the Linke all say this doesn’t cover the Istanbul Convention because consent isn’t mentioned. To support this point, the German association of rape crisis centres and women’s counselling centres (BFF) has documented dozens of cases where men were not convicted of rape or sexual abuse because women did not fight back enough – even if they said no.

The BFF also pointed out that men who grope women in similar situations to those in Cologne on New Year’s Eve usually escape sexual assault convictions because the woman didn’t scream or fight back. So come on, CSU and your Focus stooges, here’s a great way to show those feminist values you’ve been going on about for so long and that Germany is so famous for even though no one ever fucking noticed before.