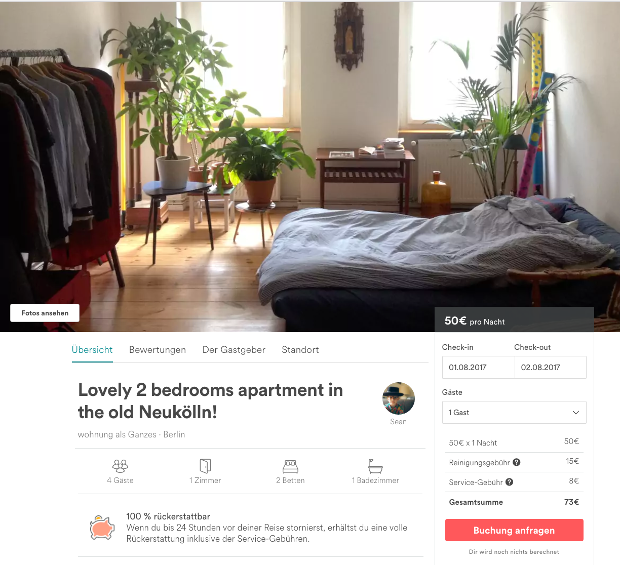 Berlin’s had a ban on short-term sublets for a year now – but the likes of Airbnb and Wimdu are still bursting with holiday rentals. How come?

In a city like Berlin, the appeal of holiday rental sites like Airbnb or Wimdu is obvious. With the average age of tourists coming to the Hauptstadt just under 40 (aka Generation Easyjet), it’s not hard to imagine flying in for a weekend, hitting Berghain, enjoying a flat white at the Barn, heading to Mauerpark on Sunday and then flying out again – all while staying at an achingly cool Altbau flat with a balcony overlooking Maybachufer.

But will that flat be legal? In a bid to combat the housing crisis, the Berlin Senat passed a Zweckentfremdungsverbot (“ban on wrongful use”) in May 2014. Though not solely limited to holiday rentals, under the law, people who sublet more than 50 percent of their apartment by the night or week or for commercial purposes (i.e., for profit) without an official permit can face a fine of up to €100,000. After a two-year transition period, it came into effect on May 1, 2016.

One year later, has it had any impact? If you go on numbers alone, the answer would be no. In May 2016, there were around 11,700 Airbnb listings in Berlin; today, there are over 12,000. Some of those are individual rooms, which fall within the law, but plenty of whole apartments are available – and considering there are just 6329 officially registered holiday apartments throughout Berlin, we’re guessing there are quite a few under-the-radar shenanigans going on.

Enforcing the ban is complicated. In Berlin, there are just 34 employees charged with the task of tracking down illegal apartments. Data protection rules mean they can only go on public information (i.e., searching public profiles) and on tip-off s from neighbours, the Ordnungsamt or the police. It’s a painstaking task that’s resulted in few convictions.

Since the law came to fruition, there have been various appeals. Most recently, on April 6, a case brought to Berlin’s High Administrative Court by four plaintiffs (including homegrown Airbnb clone Wimdu) questioning the constitutionality of the law was deferred to Germany’s Federal Constitutional Court in Karlsruhe.

The decision was viewed as a victory by Wimdu. “It is a breakthrough for holiday apartment operators. The prosecution of hosts, which is in conflict with the German constitution, must become a thing of the past,” said Wimdu lawyer Péter Vida. “This is also a success for a modern and tourist-friendly Berlin opening up to changing consumer interests rather than looking for scapegoats.”

Berlin’s authorities remain undeterred. In a statement, Mitte mayor Stephan von Dassel and district councilor Sandra Obermeyer said, “Every apartment that is lost for Berliners pains us, but much more important is the thousands more apartments that will remain in the housing market in the future. To this extent, we look forward to the decision of the Federal Constitutional Court and consider the outstanding judgment as a legal basis for our further work to stabilise housing in Berlin.”

Airbnb wasn’t involved in the case, but the holiday rental giants have voiced their own disapproval with the ban. “The rules are unclear,” says spokesperson Isabelle Witzleben. “But the main issue is that the law doesn’t differentiate between professional operators and people who just want to share their apartment for some extra income while they’re away. The law is intended to put housing back onto the rental market, but home sharers don’t take away any housing.”

While Airbnb may have started as a way to make use of unused space – one of the original tenets of the share economy – some enterprising flat owners have clearly parlayed it into a full-time profession. At the time of the ban, one of Berlin’s biggest users had over 40 listings on the site. “Clear rules for home sharing can help control professional operators, but it’s wrong to harm regular Berliners,” says Isabelle. To that end, “Airbnb works with cities all over the world to help policymakers promote home sharing,” she explains, citing regulations in London that set a 90-day annual limit for hosts. In Berlin’s case, they are lobbying the city government and have set up an online citizen’s group to provide advice to “home sharers”.

Yes, a steady stream of tourists and the constant clang of wheely suitcases can be a big annoyance – and of course, let’s not forget that many Berliners renting out their rooms aren’t telling the Finanzamt. On the other hand, restrictions on professional listings and limits for hosts seem far more sensible and, crucially, enforceable than an across-the-board ban. As things stand, the current ban isn’t likely to alleviate Berlin’s rental problems. Which sort of defeats the purpose.