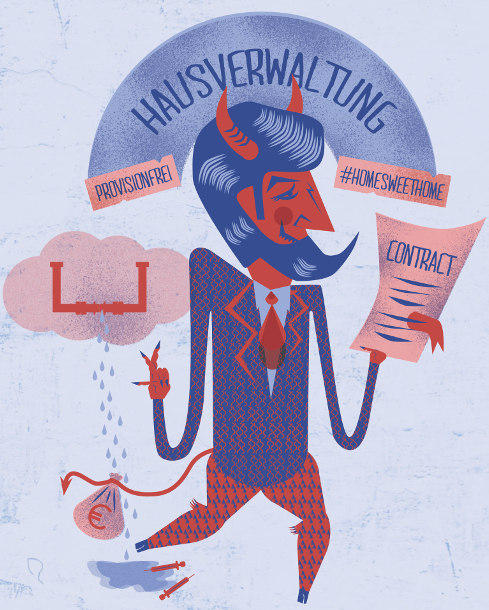 Junkies in the stairwell, deceitful claims, erroneous utility bills, held-back deposits: GMRE is one of the biggest and worst property management companies in Berlin. Tenants have been trying to sue, but how do you beat a British juggernaut?

There are about 20 of us standing in front of the Schöneberg building, mostly groups of two or three buddies looking for a flat share, along with a sprinkling of couples and two families with young children. Some are sitting on the pavement, smoking a cigarette, while others – the less experienced flat-seekers – stand in front of the door, trying to make sure they’ll get in first. Anything to have a better chance at scoring that three-room, 75sqm flat for €929, all inclusive, even if the “zero euro” for heating stated on the website is… unlikely.

Our realtor is late. Conversation ensues and we quickly end up comparing notes about the Hausverwaltung advertising the flat, GMRE. Most of the hopeful future tenants know its reputation as one of the biggest and most infamous real estate management companies of Berlin, but given the current state of housing in the city, they’ll take what they can get.

GMRE Consultants GmbH was founded in 2006 as a branch of a London-based investment company, Gabriel International Ltd, under CEO Rouven Kerstan. During the year of their founding, the company owned 54 buildings in Berlin; by 2008, they owned or managed over 3000 properties. They now no longer publicise their numbers, but an ex-employee of the company, Matthias*, says their current holdings have about doubled since then.

There are other dubious foreign-owned management companies in Berlin, but none with an entire Facebook group of disgruntled tenants dedicated to them. Among the 500 members of “GMRE – affected renters come together!” are Luca and Adrienne*. The thirtysomething Italian couple found their Neukölln flat through GMRE after a months-long search; ejected early from their previous flat, they’d agreed to pay half a month’s extra rent (€320) in order to move in on the 27th. “We had no choice – we had to clear out our other apartment, and we could only move over the weekend. We signed the papers, paid over €2000 altogether including the deposit, the extra rent, payment for keys and so on…” recalls Adrienne. “Then, a few days later, when we were supposed to meet the realtor to get the keys, he just didn’t show up! We kept calling and when we eventually reached someone, it turned out that the guy we talked to had just given us a fake piece of paper with the date on it, meaning we couldn’t move in early… We never saw that money again.”

When they did move into the flat, they were shocked at its condition. “It was torn to pieces! The guy had mentioned something about ‘renovations’… turns out that meant ripping out the floors and built-in cupboards, and leaving the rest to us. A few months later, we got a letter saying our utility bills were actually €50 more than our contract stated, and a year later they raised our rent by another €50, so now we are paying €100 more than when we started…” Adrienne says. “That includes an extra charge for the building’s elevator, even though we live on the ground floor. And on top of that, the trash isn’t taken away frequently enough. It’s dirty, it smells and the heaters didn’t work for half of the winter. We are desperate to move!”

A quick scroll through the anti-GMRE Facebook group proves the couple isn’t alone. Tales abound of filth, broken water heaters, renovations promised but not undertaken, incorrect utility bills and unreturned deposits. Eliot* has experienced almost the entire list. He lived in a GMRE apartment for five years because, as he says, “I was lazy.”

“I just arrived to Berlin from Scotland to do my MA, and I teamed up with a German guy to look for a place,” remembers the literature post-graduate, munching on a bar of chocolate in a Neukölln café. “I had no idea about anything here, so I just agreed to whatever came along. We’d been searching a lot, even went to one visitation appointment where after two hours, we found out that the flat had been rented for two weeks already! I should have gotten the hint then! But their prices seemed so low…” They had been living in their new flat for three months when it started to show signs of rainwater damage. “At first, it was just smaller yellowish spots. Then those grew bigger, till eventually water started dripping on my table. We wrote emails, made phone calls, but they didn’t even react for a month! A lawyer friend told me to send a paper letter to them, and then they immediately called. Turns out they have to respond to that because it counts as proof of neglect if it comes to court, and emails don’t.”

The workers sent by the company, says Eliot, looked like “two random people from the street, not real roofers, and they did their job accordingly: not well.” The water kept dripping. Four tries later, the roof was fixed but the ceiling remained stained. “I kept documenting all of it, because, by then, I knew we’d have problems. And I was right: when I finally moved out, they said there were so many repairs to do that they were not going to pay our deposit back. I took them to court after that, and my lawyer says we can win eventually, but I still haven’t gotten my money after spending at least €3000 on this case. I don’t know how other people do it.”

Many tenants are tempted to wage a legal battle against GMRE, but few can afford it: a Berlin lawyer’s hourly fee can reach €100. Joining Berlin’s Mieterverein (Tenants’ Association), as Adrienne and Luca have done, could be an alternate solution. Since 1888, the association has offered legal help to Berlin tenants willing to pay its membership fee (currently €4.50-9/month, depending on income and membership length). They now count over 160,000 members to whom they provide legal advice and lawyers’ costs, as well as collective meet-ups in each city district. “The problem is that many tenants don’t know their rights,” explains Mieterverein spokesperson Reiner Wild. His colleagues have dealt with endless numbers of desperate GMRE victims, but due to the company’s army of talented lawyers and the fact that German law doesn’t allow class-action lawsuits, his association is fighting an uphill battle. “But it is a fact: GMRE is breaking the law. Yes, there are loopholes, but they’re definitely not respecting Berlin’s rent raise cap of 10 percent per year. In their case it’s often higher, but they do it anyway. You know, murder is also illegal, and some people still kill!”

One of the association’s plaintiff s is Katie*. The young single mother of two moved out of her GMRE apartment near Hermannplatz in January, after a hellish five months of urine, faeces, used needles and broken locks. “It was a junkie den! When we visited, it was cleaned up and the locks on the front door were working, but just a couple of days after we moved in, they broke again. They’d come shoot up in the stairway and leave their needles, blood, spit, vomit, shit and piss everywhere. My kids are five and six; they were terrified because these addicts would start banging on our door at night. We called the police several times but it was useless, they’d come back. GMRE refused to change the locks again because it was ‘the tenants’ fault’ they kept breaking… They didn’t clean the hallways, either. We and two other families took turns picking up the needles so at least our kids wouldn’t hurt themselves.”

She broke her year-long contract, moved out, and sued GMRE through the Mieterverein. “Now GMRE is actually turning the lawsuit around, saying that because I broke the contract, they’re both keeping my €1500 deposit and charging me a fee of €1500 more. For now, we’re staying at a friend’s place because I wouldn’t have the money to sign a contract on a new place. I never thought my life could be destroyed by a real estate company,” says the 32-year-old with tears in her eyes. “I’m a dental assistant, how am I going to stand back up on my feet?” For the time being, she has no choice but to trust her lawyer, who assures her the association has won many cases like hers before.

“Good luck to her!” says Matthias, the former GMRE employee. “GMRE has an outstanding legal team that knows exactly how to word their documents in order to be able to get out of any lawsuit.” And apparently there is not much to be done against the company, as long as they keep settling the individual cases they lose. In their last published annual report, from 2014, GMRE claimed a turnover of about €12 million. Matthias thinks there is a lot more money changing hands, but he, of course, has no proof of that either. “Just think about it, we are talking about 6000 properties in Berlin, that’s no child’s game!” he laughs bitterly. “There’s a lot of money in Berlin real estate, obviously, and this British company realised that in time to cash in. I don’t think the people who buy flats through GMRE know how things are really being handled, they just want the money…”

Matthias started listing and showing apartments for GMRE less than two years ago, but he recently quit and moved back in with his parents in Hanover, citing burnout. “Let’s just say I wasn’t built for it. At first you’re trusted with very little. For the bigger deals, you need to prove yourself. The ones who have the stomach for it will end up tricking people into signing dubious contracts, making money on commissions. I didn’t have the stomach, and I got tired of being screamed at by tenants and bosses. Everyone is so frustrated in that office that we don’t even realise how mean we’ve all become,” Matthias explains. Meanness to tenants, in fact, is one of the most frequently mentioned complaints about the company. GMRE CEO Rouven Kerstan and his colleagues refused to comment, letting us know only that they “dislike and don’t trust the press.”

We wait for over an hour in front of that building in Schöneberg. By now, several people have left, either to go look at other places, or simply because they’re fed up. The rest of us have gotten beers or snacks from the Späti on the corner. Every so often, someone calls GMRE’s office only to receive an automated answer. Finally, after an hour and 20 minutes, a short, skinny, nervous man with shiny blond hair leads us into the building. It smells like trash and the staircase is dirty; parts of the handrail are missing. The realtor tells us it’s going to be repaired “next week”. The apartment is spacious, but in need of major renovations. When we question the realtor about the “free” heating, he says it must be a mistake, then quickly turns to someone else and avoids further questions. On our way out, several people discuss applying for the place – and moving in, just for a while, until they can finally get the flat of their dreams.