Seven places to indulge in selective memory of the socialist state. The GDR was such a (socialist) paradise: cities were run-down and polluted, East Germans were impoverished and paranoid because they never knew which one of their friends was on the Stasi payroll… Not exactly a sexy history to brag about to tourists, yet history is malleable material and, when it comes to making money, our victorious capitalists are conveniently turning a lenient, forgiving eye on the system they once abhorred. Trabant rentals, Ossi eats, Plattenbauwohnung getaway weekends, pieces (real and fake) of the Berlin Wall – it’s an industry unto itself. We tested a full range of Soviet bloc retro-experiences, from tasteful remembrance to in-your-face pandering. Plattenbau Museumswohnung Make a trek to Berlin’s far eastern outskirts on a glorious Sunday afternoon if you’d like to step into a drearier, more ‘authentic’ version of the past. Do try to contain your excitement when confronted with the plethora of Soviet-era wonders within the preserved 1980s flat: East German cookbooks filling shelves, Soviet vacuum cleaners tucked beside “Karat” wardrobes, old newspapers adorning the living room table. It’s a bit like a visit to your grandma’s place – provided she is a hardcore communist. If you’ve seen the brochure, you’re not going to see much new when you arrive and, apart from a few antiquated brands, there isn’t much difference between this East Berlin flat and any retro pad from the same period. That said, it’s far from the garish instances of Ostalgie which can be seen throughout Berlin, and seems geared more towards the genuine nostalgist than the typical GDR looky-loo. Hellersdorfer Str. 179, Hellersdorf, Sun 14-16, tours in German only. Ostpaket While Westpakete were the longed-for packages of coffee, clothes, chocolate and even toilet paper sent from West German friends and relatives to pimp up the no-frills lives of Easterners, Ostpaket sells and ships GDR products to citizens of the capitalist world. Located between The Dungeon and Alexanderplatz, about one-third of the shop is devoted to pleasing the tourist hordes – Wall knick-knacks, Trabant towels and patriotic Young Pioneer-style scarves (€4.90). But according to owner Bianca Schäler, herself a native of Thuringia, 60 percent of her customers are denizens of former East Germany, there for her selection of hard-to-find GDR-produced cleaning products, cosmetics and clothes, many of which have achieved cult status. Schäler says they’re bought not just out of nostalgia, but also for their taste and quality, a dubious claim when it comes to the food: chocolate bar Schlager-Süßtafel tastes like chalk even though the current version is 32 percent cocoa (up from 7 percent in GDR times), and making Eis out of the famous Komet-brand powders is a peculiar idea in a city where there’s no shortage of the real thing. At the end of the day, Ostpaket makes for a rather unrealistic GDR shopping experience: missing are the long lines before making your purchase. And you don’t need ration cards to buy anything. And the shelves are actually filled with products… Spandauer Str. 2, Mitte 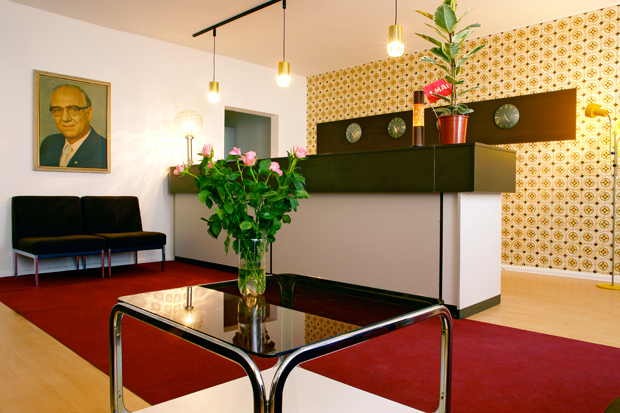