I’ve passed this thing dozens of times while speeding down Leipziger Straße by bike or car share on my way to Potsdamer Platz. I’ve always noticed the object in the corner of my eye but never paid it much attention: a bright yellow phone booth elevated on a pedestal. For some reason it popped up in my thoughts the other day so I paid it a visit.

There it stands, an ancient relic from the pre-mobile era. A design classic as emblematic of the old West Germany as a Braun shaver, the first VW Golf, gummy bears and good Wim Wenders movies! That yellow, so institutional in a 1970s kind way! Those rounded edges, so optimistically futuristic! An obsolete artefact from the time when buildings like Tegel Airport, the Stabi library at Potsdamer Platz, and the Steglitzer Bierpinsel felt like expressions of unstoppable modernity.

I look back at the phone booth era with some nostalgic fondness. (OK, boomer.) But listen –  it was a time when a phone call had import, substance, expectation, suspense. A time when communication didn’t feel like multi-platform schizophrenia. It was a more linear type of drama. You could get cut off because you didn’t have the right change in your pocket. And a public phone call could take place in a tiny private space, insulated from urban noise. Chances are, the person you were calling wasn’t around so you’d leave a message and there were no other options available to you but wait to get home and check if that love interest or potential employer had left their own message on your machine. It seems ridiculous to write about this experience as if it were something positive. But maybe it’s like music: you’ll always feel emotionally attached to the music you listened to in your early 20s. 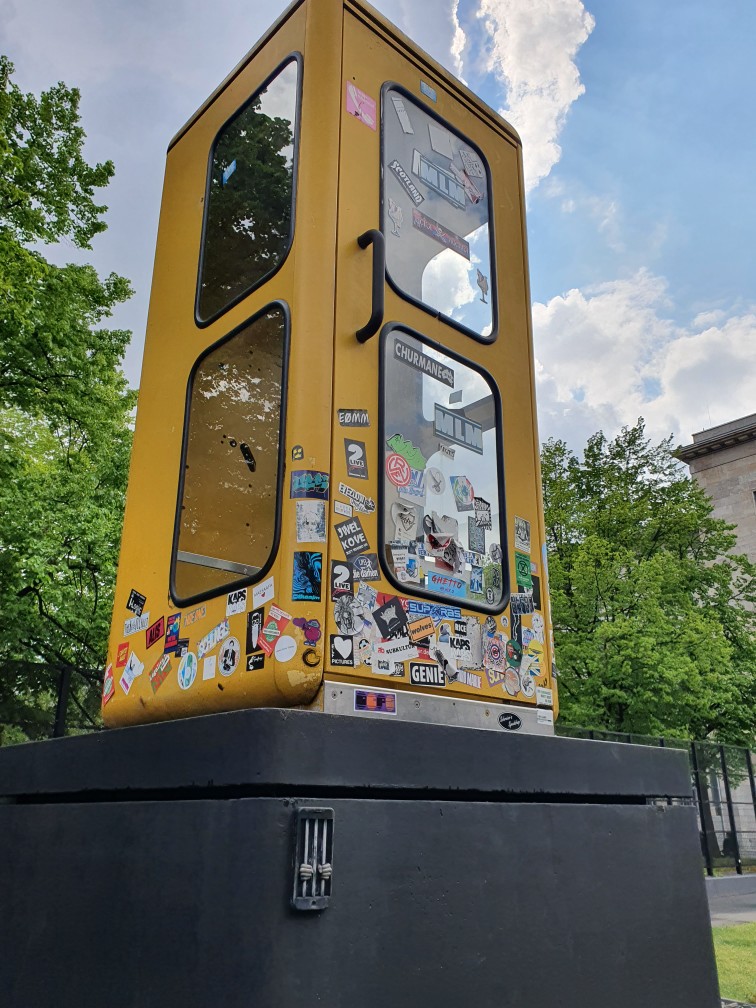 This Telefonzelle – long gutted of its telephone – was hoisted onto its pedestal in 2015, back when mobile market penetration began to reach 99 percent. The booth is, of course, covered in annoying stickers promoting skateboard brands and anti-fascist punk bands and whatnot. More interesting is an addition that seems to have been made by an anonymous artist, a cartoonish, 3-D representation of a smartphone stuck onto the pedestal. The phone’s screen is filled with three prison bars. Two hands reach out of the darkness and grip the bars, a not-so-subtle comment on our enslavement by devices.

The phone booth has its own little park, which consists of a field of black stones resembling lumps of coal adjacent to a square painted on the ground in a similar yellow and containing some cryptic squiggles. There’s a bench around the edge – empty apart from a homeless fellow eating his lunch – and an info panel which makes it clear that this is whole installation is a promotion for the Museum of Communication down the road.

At any rate, it’s a pleasant little space in the middle of an inhospitable urban environment. The back of it borders on a huge lot filled with cars. Why is there a vast car park in the very centre of Berlin? The parklet faces Leipziger Straße, which is little more than an inner-city autobahn emitting noise, nitrous oxide and CO2. The whole neighbourhood is a planning fail: a hodgepodge of random East German prefab apartments; the grotesque Mall of Berlin where the first Tresor club once stood; the pompous techno-Prussian sterility of Leipziger Platz. The Nazi-built colossus housing the Finance Ministry across the street from the phone booth almost feels like good architecture compared to the rest of the shitty buildings on the street.

One day soon, I’m sure, the parking lot and the phone booth and its tiny refuge of a park will be bulldozed to make way for another mall or office complex. Visit while you still can!