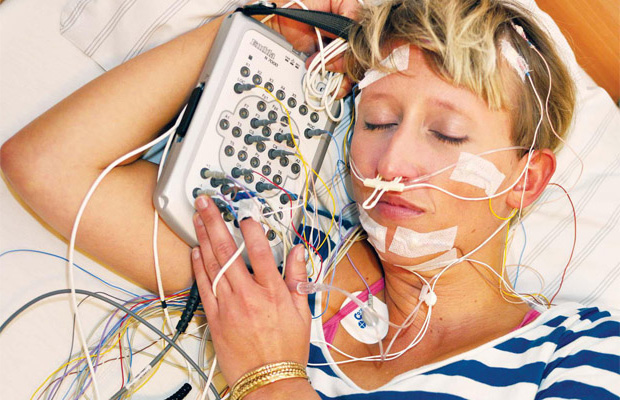 Every night, when you tuck into bed and drift off to dreamland, your body and brain become a buzzing hive of activity. At the Charité Sleep Lab in Mitte, the research begins when the lights go out. For one night, Anne Lena Mösken packed her pyjamas and donated her brain to science.

It’s 7:30pm and I’m in my pyjamas. “Once we’re done with you,” Rudi had told me a couple of minutes earlier, “you won’t be able to get into them, so better put them on right away.” I swallow my vanity, trying to ignore that Rudi is quite handsome. With his sun-bleached hair and blue jeans, he looks more like a surfer than the fourth-year medical student he actually is. I stare at the festival bands on his wrists while he doesn’t seem to notice my somewhat ridiculous pink-chequered pants.

I’m sitting in the tiny ‘wire room’ of the Charité Sleep Lab in Mitte. Coming here had felt like going on vacation. I packed a tooth brush, a book, and, of course, the pyjamas. Sleep lab – that sounded cozy.

Now I’m not so sure anymore. Rudi pokes a very sharp pencil into my scalp. “Ouch,” I shriek. “Sorry,” he says, and pokes me again, his fingers scribbling through my hair. He’s marking the different areas of my head that apparently correspond to certain parts of my brain and where later he’s going to put the electrodes for the EEG.

With the help of two other med students Rudi measures and pokes – and I feel like I’m part of some dubious eugenics study. Then, Rudi grabs a pistol-looking instrument. “Glue,” he says. Glue?? But Rudi is quick, and already I have two wires, well, glued to my scalp.

What’s going to happen to me until the next morning is called polysomnography: all of the biophysiological changes that occur in my body while I sleep will be recorded – my brainwaves, my heartbeat, the oxygen saturation in my blood, the movement of my eyes, chin, chest and legs. The activity of my brain, eyes and the chin muscles is what can later be analyzed to make out the different phases of sleep that I will go through.

There are two phases with relatively light sleep, then a phase of deep sleep, then REM (Rapid Eye Movement) sleep. While in deep sleep eyes move slow and parallel; REM is known for the swift movement of the eyes. It’s said that REM was discovered for the first time in sleeping babies, and for a long time it was considered the phase in which one dreams. Now we know that we dream in every phase of sleep, Rudi tells me. A healthy sleeper goes through these phases several times a night. (See our interview with dream analyst Klaus Vollmar.)

After Rudi and his friends are done with me, I look like an accident victim. Or a human lab rat. Or an astronaut. Probably all of the above. I try to smile at Rudi, which is difficult because wires are attached to my chin and forehead with white band-aids that make every attempt at a facial expression pathetic. Rudi kind of hugs me, strapping three belts around my belly; they feel too tight, and make it hard to breathe in deeply.

I head to my room carrying the small board in which all the wires come together. Slowly I move through the corridor; slowly I get on the bed; slowly, slowly, moving like an ill person – and actually starting to feel like one, immobile as I am.

Through the open door of my room I see other patients sneaking through the corridor – an elderly lady in a pink nightgown, an old man with chequered pants, a young doctor also with chequered pants (they’re in fashion apparently) whom I met earlier in the wire room and who seems to be a professional sleep-lab rat. He’s spending the night here to test a mattress for some big company.

Charité has four sleep labs in Berlin. They vary in size from two beds in the experimental lab to 20 beds in a privately run lab in Wilmersdorf.

Most patients who come to Charité’s sleep lab are insomniacs. They have problems falling asleep or they wake up in the middle of the night and are unable to fall back asleep for quite a while afterward. Other patients have the opposite problem: hypersomnia. They have difficulties staying awake during the day, sometimes falling asleep in the middle of conversations, at work or while driving.

And then there are the apnea cases. I had heard about that before. You just stop breathing during sleep, for as long as three minutes in really bad cases. And while everybody has a few apneas in their sleep (up to 30 is considered normal) – when dreaming something exciting, for example – these people have as many as 400 to 600 per night. In the morning they feel completely knocked out. Believe it or not, as many as three percent of Germans are diagnosed with sleep apnea: only two percent of women (four percent of men and very few children, most of them overweight).

While lying in my cell-like sleep lab room, staring at the camera on the wall opposite my bed and wondering if Rudi is already watching me; I start getting nervous.

What if I have apnea? Don’t I feel tired in the mornings no matter how much I sleep? I just went on vacation with a friend, we shared hotel rooms and she complained that I snored. The way she mocked me in the mornings now seems to indicate apnea, at least the way I imagine it. That’s how many people get here: their partner hears them stop breathing at night.

What if I have to get treatment? Surgery? Or the most common thing: a breathing machine that pumps air into your lungs through a face mask that is not very comfortable and makes your face sore. I regret my lifestyle in the last weeks – smoking, drinking, going to bed at very random times, sometimes not sleeping at all on the weekends. Berlin, I suppose, makes you an unhealthy sleeper.

The night before I had slept only an hour, which had calmed my earlier fear of not being able to sleep here but now makes me nervous, wondering whether it’s going to mess with my results.

Rudi interrupts my ever-faster-spinning hypochondriacal thought carousel and announces that he now wants to perform my Bioeichung (bio-calibration). He hands me a walkie-talkie. “Do what I tell you, will you?” he says. I venture another futile band-aid smile.

Rudi leaves and then tells me through the little talking device to roll my eyes, grind my teeth, hold my breath, move my legs. “Fun,” I think, feeling childishly proud of my eye-rolling and leg-moving performance.

Rudi comes in, tucks me in, waves a casual good night and doesn’t turn back. I’m alone. I try to read my book but the camera irritates me, so I turn off the light. My index finger glows in the dark. The red light attached to it shines through my capillaries to measure the oxygen saturation in my blood.

Great, I am the protagonist in an R-rated E.T. sequel, where the poor thing has been caught and put into a test lab. I giggle, then remember the microphone next to the camera and immediately stop. I hold my breath, wondering if this is already being recorded as an apnea, toss and turn a couple of times – then the sleepless night behind me kicks in and I fall into a coma-like sleep.

I do remember one final thought before I slipped off: “If I dream of Rudi, please, please, let me not say his name out loud.”

At 6:40am, there’s a decisive knock on my door and the room floods with neon light – Rudi is back. I remember being 14 and throwing things at my mum when she would do such a thing to me; I briefly consider throwing my book at Rudi, but since he is responsible for removing all the wires from my body, I don’t. Instead I pretend to be awake, stumble after him while he hands me an acetone-drenched tissue to remove the glue from my hair. The sharp smell wakes me up quicker than my morning coffee ever has.

I had three apneas that night, the technical assistant tells me the next day, and I snored for three minutes during eight hours of sleep, divided into 13 episodes – an average of 10 seconds. I’m relieved and consider putting this on my Facebook profile.

Everything else about my sleep was normal as well, at least on that night at the sleep lab. Whether I called out Rudi’s name – well, that I’ll probably never know.