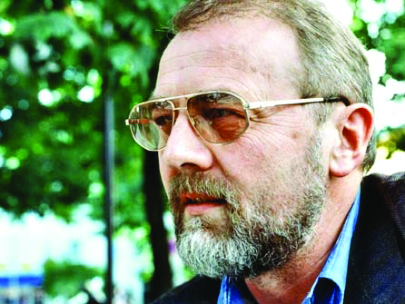 In 1983, the Stasi agent known as ‘Topas’ gave the soviets information that may have prevented a full-on nuclear war. Nearly 30 years later, Rainer Rupp speaks.

It’s 1983.  US President Ronald Reagan has just announced the new ‘Star Wars’ programme to protect the West from the ‘evil empire’. For the Soviet leadership under Chairman Yuri Andropov, this is serious business. The KGB begins to anticipate a nuclear attack. In early November, NATO holds the “Able Archer” exercise testing their communication in the case of a Soviet invasion of western Europe, which would culminate in nuclear destruction. The Soviets know that in previous years this was just a war game, but by their “Revolution Day” on November 7, they are convinced that this time is different.

All over the Eastern Bloc, bombers start their engines and wait on the runway while commanders keep their fingers on the button, ready for an instant retaliation.

Just as the crisis nears its boiling point the Stasi receives a message from ‘Topas’, their top agent at NATO headquarters: despite all the militaristic rhetoric of the Reagan administration, Able Archer is not, in fact, a cover for war.

At no time did the world stand so close to nuclear war as during the Able Archer incident.” -Vojtech Mastny, US Naval War College

Reassured by this message, the Soviets call off their offensive. The tension that had been building for months begins to dissipate. Fingers are taken off buttons, bomber engines are shut down and what could’ve been the greatest catastrophe in history ends with a nation breathing a collective sigh of relief.

“I basically informed them that as far as I could see from my key position at NATO, no attack was planned,” recalls Rainer Rupp, the man once known as ‘Topas’. Now 67, the retired agent keeps a low profile and rarely speaks to journalists.

“I did my job and transmitted the information,” Rupp says. This he did thanks to a Bond-like gadget resembling a calculator. “By inserting a needle into a small hole, I could activate its real function: enter a coded message into the device, which would transform it into a short burst of static.” Then, all he needed to do was go to a phone booth and dial a number in East Berlin.

Though Rupp joined the Stasi for political reasons, he maintains that his main interest was preventing a nuclear war. “The goal of my reconnaissance work, and that of many other comrades in the secret front, was not to win a war but rather to prevent a war.” Rupp, like many other Stasi agents in the West, never got a cent for his information.

From student to agent

Rupp’s path into the spy game started at the University of Mainz in the mid-1960s, where he was active in student protests. After a demonstration against West Germany’s Emergency Acts (“the abolishment of an important part of our civil rights”, as he maintains to this day) Rupp and his comrades met an older man in a sausage and beer joint. “He sympathised with our ideas, which was very rare in those days.” Rupp soon learned that “Kurt Schmidt”, who had helped them pay for their beers when they were a few cents short, was a talent spotter for the Stasi.

When Rupp visited East Germany, he was impressed by the fact that ordinary workers had a chance for education. “I met people who grew up milking cows in some godforsaken village in Mecklenburg, and went on to be university professors.” It was then that Rupp decided to support socialism by spying on its enemies.

After observing the NPD in the province of Hesse, he moved to Belgium where, to his own surprise, he landed a job at NATO in 1977. Over the next decade, he photographed about 10,000 pages of classified documents for the Stasi’s Central Reconnaissance Administration. He was aided by his wife and fellow double agent Ann Christine Bowen (codename: ‘Turquoise’). “Of course I was scared,” Rupp recalls. “But you get used to the danger.”

I could always explain documents in my briefcase, but what would I say if they found a camera?

At first he took documents home and photographed them in his wine cellar, after which Bowen surreptitiously returned the papers to their original location. It was “nerve-wracking and tiresome”, but his handlers didn’t want him to take a camera to work. “I could always explain documents in my briefcase, but what would I say if they found a camera?” As he worked his way up the hierarchy, he started to use microphotography in his office to transform documents into little dots and hand them over to a courier from East Berlin. Eventually, the Stasi “had to hire extra typists and translators just to process all the information that came in” from ‘Topas’.

Did anyone suspect him at the time? It was no secret that Rainer Rupp had been a lefty in his youth. “But that was considered youthful enthusiasm, and it was assumed that as one gets older, one returns to the arms of the bourgeoisie.” A member of the FDP even tried to recruit him as a candidate. “I could have been a member of parliament!” he says with a laugh.

Only after the GDR fell apart did the West realise that NATO had been an open book for East Berlin. They began a search for a whole ring of spies, but eventually realised that there was in fact just one very effective agent. Rupp and his wife were caught in 1993 while on vacation in Germany. In 1994, he confessed and received a prison sentence of 12 years; Bowen served a relatively light 22 months. Since his early release in 2000, Rupp has been living in an undisclosed location (though his phone number suggests it’s somewhere in southwestern Germany, near his hometown of Saarlouis).

Doesn’t Rupp have qualms about working for a regime that spied on its own people and locked up opponents? “In West Germany, 2.5 million children lived under the poverty line. In East Germany, there were no hungry children. If I have to choose between 10,000 imprisoned dissidents and millions of impoverished children, I will pick the children every time.”

Although he left the socialist party Die Linke a few years ago, Rupp is still adamant about his convictions and passionate about politics. However, he remains extremely reserved about personal topics. He won’t answer questions about his wife, whose whereabouts are unclear. Currently he writes about the US for the Marxist daily paper Junge Welt, as well as “other things” which he refuses to specify. Old spy habits die hard.

Twenty-nine years after Able Archer, the event remains one of the closest shaves in history. Did Rupp really prevent World War III? Milton Bearden, head of the CIA’s Eastern Bloc spy programme, said that secret services on both sides “contributed to the fact that the Cold War didn’t get hot”. But Rupp himself plays coy about it, saying, “I only quote other people who have said that. I’ve never made that claim myself.”