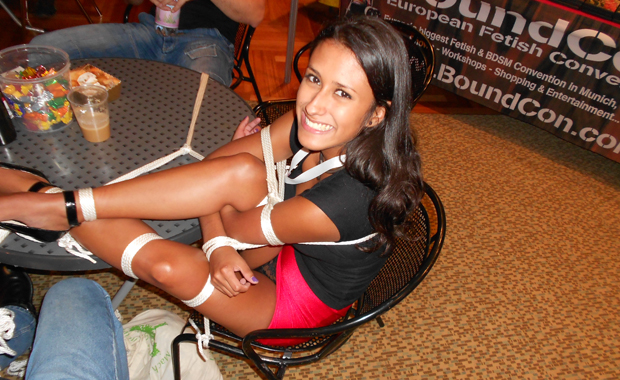 Once upon a time Venezualan beauty Drea Morgan, 22, was a good Catholic girl. That was until two years ago. Morgan answered the primal call of the slut lurking deep within her by surfing the evil internet to seek solutions. Just unfortunately in wrong direction and not the Vatican or her local Catholic Church. Morgan’s inner slut craves to be roped down, tied up, gagged and bound, blindfolded and where possible, suspended and hung from the ceiling. Some would say the perfect wife. Others would say Morgan missed the Spanish Inquisition by five centuries.

Rope burns, rope marks, being tied to other girls by the hair, Drea is not tongue-tied when it comes to describing her fetish. Even tongue tying is in. She delights in it all. Just not tying up other people. Drea’s bête noir is predicament ties: one hand tied to the ceiling so she can’t sit down and the other hand tied to her knee so she can’t stand up. Three coughs means she’s had enough.

“Every tie is a predicament,” says Drea’s master Lew Rubens. “At some stage you have to drink or go to the toilet.” Fifty-year-old Rubens, who had previously been wasting his life away in “a dead end job” laying cables, couldn’t believe his luck the day the exotic Latin beauty walked into his bondage class. Once again the Devil’s Work was to blame, the evil internet misleading the sultry coffee-skinned goddess straight into Rubens’ tangled web. Since then the two have been inseparable. Given the chance, Rubens would be mad not to tie the matrimonial knot with the quietly-spoken, bi-lingual Morgan.

Rubens’ own inner slut emerged at the tender age of four. That was when he tied up his first girl. “Been in me forever,” says the Florida man, “I tied everyone up when we played cowboys and Indians. I tied up furniture, bikes, cars, you name it, I tied it.”