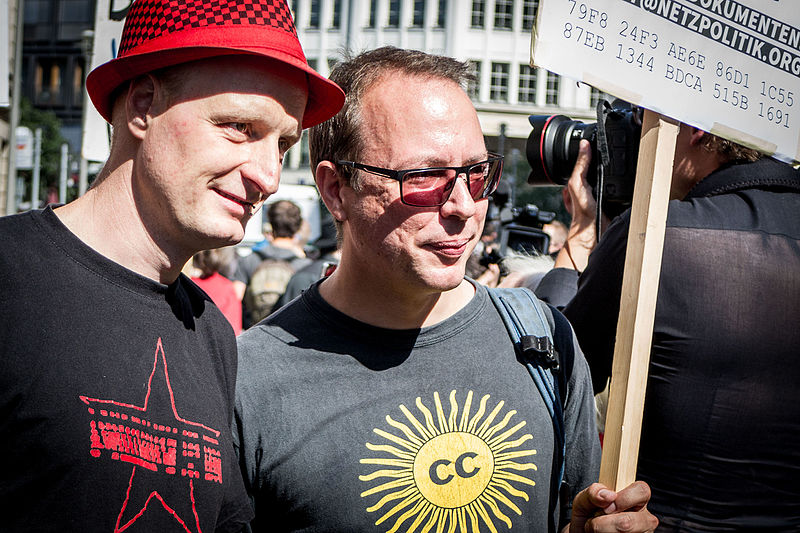 Markus Beckedahl and Andre Meister of Netzpolitik (pictured) may not be tried for treason after all, and Harald Range may have been disgracefully dismissed, but the Netzpolitik affair is far from over. Digital expert Jacob Appelbaum and fellow activist Marie Gutbub are rallying journalists and campaigners to sign a petition demanding an end to the investigation. Go here to read their statement and sign on yourself.

As they told Exberliner, following Range’s sacking, Appelbaum and co. are calling for the next head to roll: that of Germany’s domestic intelligence agency president Hans-Georg Maassen. Here’s why we stand with them – and how you can get involved, too.

Why did you initiate this petition?

We think that it is important to show that journalists around the world feel very strongly about the chilling effect that this investigation has on their lives and on their work. It is important to use the medium of the press in defense of itself. We must work together to protect each other. It has been said by the German journalist Tilo Jung: All journalists are activists for the truth!

What shocked you most about the Netzpolitik affair?

Is your action really necessary now that German attorney general Harald Range has been sacked and so much outrage has been generated?

After the Spiegel scandal of 1962 [which led to the firing of federal defense minister Joseph Strauss], we feel it is important that there is a higher cost this time around. Hans-Georg Maassen has to go – that is the thought on everyone’s mind right now. He has primary responsibility and should apologise by resigning.

As someone who came to Berlin seeking a “safe haven” from surveillance, did this episode come as a surprise? A disappointment?

We see a very positive turn around here – officials abusing journalists’ basic rights are being dismissed. This is evidence that Berlin is a political safe haven – but that safety comes from the people, working together to protect Markus and Andre, and not from the city itself. How could we find this disappointing? It is extremely inspiring to see such strong support and the slow but moving accountability.

The two “treasonous” articles were actually published earlier this year – ironically, they only came to public attention BECAUSE of the German prosecutor’s ire. Does it mean that people don’t really care about those issues unless ssome big controversy makes them spill into the mainstream?

This investigation is a fantastic rallying point. It often takes time for complex issues to develop in the public sphere. More sources will come forward and more people will read about these issues. The issues of mass surveillance were of course talked about in the mass media long before this investigation, but the investigation has done something different: it has shown Germany their local Glenn {Greenwald} and Laura {Poitras}. We know who to support, who to protect and who will continue to publish.

Why should we read Netzpolitik?

Netzpolitik covers issues that are relevant for an information society, our society. They provide original source documents in the spirit of scientific journalism. They provide necessary commentary and analysis with serious reporting on the ground. This is a high standard that many print newspapers don’t meet – we should not only read and care, we should support and protect them.

What’s next? What can we, as simple citizens, do – beyond signing this petition?

Donate to Netzpolitik (https://netzpolitik.org/spenden) and if possible – become a source!