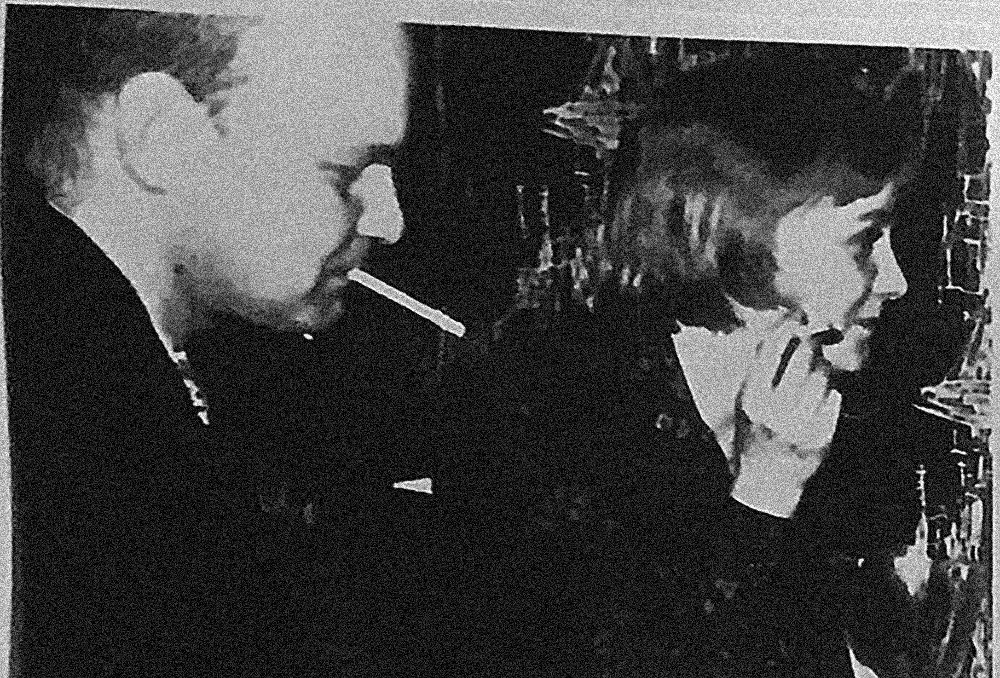 My (not-so) romantic escape to the West

Her story and her lucky sealskin coat are now part of the permanent exhibition at the Mauermuseum at Checkpoint Charlie. Vera Breitwieser on the love that got her over the Berlin Wall.

It was 1961 in East Berlin and I was 28 years old, living with my parents in Pankow. I was doing an apprenticeship at the Humboldt University Library to become a librarian. I had always been attracted to the ‘western’ way of life and I wanted to leave the GDR, I was just afraid I wouldn’t find a job there. When the Sputnik S-Bahn line was built and it went around all of West Berlin, people started suspecting the government was going to build a wall. My parents thought it would happen on a weekend, so they suggested I start spending the weekends at my aunt’s in Reinickendorf. I didn’t, and one Sunday, August 13, I woke up to my mother shouting “Now we’re trapped! We’re trapped!” They’d closed off the border and started building the Wall, which I wanted to see with my own eyes. But I couldn’t even reach the corner of Friedrichstraße and Unter den Linden, because there were masses of people there, and the police were arresting protesters. As I was walking down Friedrichstraße, I noticed a young man that seemed amused. I said to him, “Listen, this isn’t funny!” His name was Gerd, he was from West Berlin and he invited me to have a coffee. We immediately hit it off and we made plans to see each other again. But on August 21, the border was sealed off. We started exchanging letters which became more and more romantic and by November he wrote he wanted to marry me. I wanted to see him again and I also wanted to cross the border, so I said we could do it. I wrote a letter to the Wannsee Christian-Jewish-Society, explaining how sad I was, walking along the Wall every day and my fiancé being on the other side. The Society asked for his name and – this I only learnt later – they contacted a group of students at the Free University that helped organise escapes from the GDR, the Girrmann group. One evening in early December, I came home to a student sitting on my parents’ sofa. He looked really western with his Beatles haircut. He said he would help me cross the border and presented me three passports to pick from. I chose that of a Swiss woman who was only slightly younger and had dark hair like mine. He told me he would come back the following week, and that we would take the train from Friedrichstraße station a little after 10pm, when the West Berliners travel back from an evening at the East Berlin Staatsoper. The idea was that the border officers would not look too closely. I had to look like a Swiss lady though, not like a girl from the GDR. My mother lent me her coat on which she had sewn shimmering sealskin she had once ordered from the west, and a matching hat. I didn’t have western boots, so I wore pumps, despite the icy cold. I did have a western handbag though, and my guide put the passport and a stamped return ticket in it. He told me to also cut the labels off my underwear just in case, and that I would have to stride confidently, even “arrogantly”, as a Swiss woman would. He would walk a few metres ahead and I just had to follow him, so it looked like I knew where I was going. So, here I was on December 19, handing out my passport to a control officer, trying to look as confident as I could, smiling my broadest pink smile so he would not be able to see it wasn’t me in the photo. I had put on a lot of black eyeliner, which was in fashion in the 1960s! The officer left and took my passport to another room while I waited with a female officer. My helper was already out of sight and I was praying I wouldn’t have to say anything, because speaking would have given me away immediately. But I think my glamorous sealskin coat fooled them alright. And then when I reached the platform… I couldn’t find my ticket! I was frantically searching my bag, and the train was about the depart! Amazingly, they just let me get on, saying they believed I had one. Once on the train, I laughed hysterically in relief – I couldn’t believe I’d made it! (I later found out that a woman who tried the escape route a week later got caught and sent to jail!) I moved in with Gerd, my handbag my only belonging. He was working at the Hahn-Meitner-Institute of Chemistry and all his colleagues knew he had “got me across the border” (although he hadn’t done much). We started getting wedding presents right away – two coffee machines! But it didn’t take long until we had our first doubts about our engagement. There was a lot of pressure from everyone, so we still got married. We weren’t a good match though, and we divorced after three years. We would joke that it was Walter Ulbricht who’d married us!

My West Side Story

A Catholic German-American falls in love with a Turkish Muslim… Jason* is torn between his family and the woman of his dreams.

I was raised in the districts of Wilmersdorf and Zehlendorf, where I went to the American Kennedy School. With hardly any Turks around, they always seemed rather exotic to me – the guys, tough and quick-tempered,the girls, mysterious and untouchable. If you started something with one of them, you’d have her brothers to answer to. Still, or maybe because of that, I always found Turkish women attractive. One day, I was in the library in Wilmersdorf, when a woman wearing a headscarf approached me in the reading room. She invited me to a Turkish restaurant nearby, where we could talk in peace over tea. I didn’t have any money on me at the time, not even a euro, and to this day Yasemin* likes to recall that it was she who paid for my drinks on our first date. We hit it off immediately, and I soon realised she was the woman of my dreams. We decided to get married, but we couldn’t have an official wedding, because my parents were against it. She is Muslim and they are deeply Catholic and threatened to disinherit me if I went ahead with it. Until then, I had been living in my parents’ apartment in Halensee, but as soon as I hooked up with Yasemin, they insisted I leave and so I moved into Yasemin’s Wilmersdorf flat. I had already been toying with the idea of converting to Islam for many years, and so I decided to become a Muslim and marry Yasemin. So one evening, two years after we’d met, we took our vows with an imam and three witnesses. I had bought rings and we later exchanged them at a Döner kebab restaurant. It was perfect. In contrast to how my parents see Yasemin, her family has been extremely welcoming to me, although there have been problems.

She had an arranged marriage in Turkey when she was 16 (her birth certificate had to be forged), and as she didn’t want to go ahead with the wedding, she was sedated with shots. Upon moving to Germany with her husband, she had two kids. Azad, her son, is a bit of a hot-head and at first he would threaten to kick my ass. But once he saw that I wasn’t taking advantage of his mother, he began to like me. Whenever we meet other relatives, Yasemin says: “This is my husband. He is American. But a Muslim,” and no further questions are asked. As for my parents, I am still on good terms with them, they’re just old and set in their ways. They live in California, but when they come to stay in their apartment in Berlin, we go out to eat together. I hope they can see that since I’ve been with Yasemin, my life has taken a turn for the better. They know that I underwent a religious marriage, and they still don’t want it to be made official. But I recently noticed a new book on their bookshelf entitled What is Islam? So my hopes are high that they will one day accept her completely.

Me, my wife and my sex slave

He’s tied the knot but keeps the ropes for bondage. A married man and self-proclaimed feminist, Robert* feels guilty about torturing his mistress.

For almost 10 years, my wife and I have been living in a blissful “nation of two”, as Vonnegut called it. We love each other and do almost everything together, but I don’t believe a long-term relationship can meet every need of both people. Our chances of sticking it out are much higher if we can get in some crazy adventures on the side. Mine started almost half a year ago, when I met a woman on OkCupid who became my sex slave. At first, she didn’t strike me as ‘the type’ that would be into that kind of thing. She is heavily tattooed, lives in a lefty Wagenplatz where she chops her own firewood, and has a well-paid job at a big NGO… She would have terrified me if we had met in a bar. Thank God for OkCupid. When I see her, I become a totally different person.

“I’m a stupid, worthless, ugly slut,” she says, as I push her head into a tub full of icy water. She tries to scream, but only produces bubbles. She can’t fight back, because I’ve tied her up with ropes. I won’t let her go until she drops a set of keys to signal she’s had as much as she wants. We’ve come up with so many ways for me to hurt and degrade her. Once I met her in a park outside her work and tied her hands behind a tree trunk while choking her with her belt. Another time I performed a Donald Trump speech while she was lying blindfolded and gagged in bed. Every day she sends me something degrading about herself via WhatsApp, while I Google new insults and study the pimps from James Franco’s series The Deuce. My wife knows about our little S&M games. Sometimes the three of us play together. Then, as husband and wife, we can beat her as a pair. “You and your wife are such pervs,” my slave tells us. Love is reserved for my wife, while I can have fun with my slave precisely because we aren’t a couple. Although I once got her to declare she loved me – I was applying an electric shocker to her inner thigh at the time. I responded that she is garbage and everyone hates her. After the games are over, we always wonder what’s wrong with us. I know that if I ever used misogynistic terms in public, I would become a pariah in my leftist circles. But it is super exciting to break this taboo. Maybe the fact that I feel both virility and shame at the same time when I express this toxic masculinity proves how genuinely repulsed I am by patriarchal society. My unconscious mind does some acrobatics and turns revulsion into sexual desire, giving me control over something that scares me. Does that make me a bad feminist? My slave doesn’t think so: “Exploring sexual curiosities in a safe environment is what a feminist should do.” Well said. To reward her, I think I will tie her to a chair and beat her with a stick.