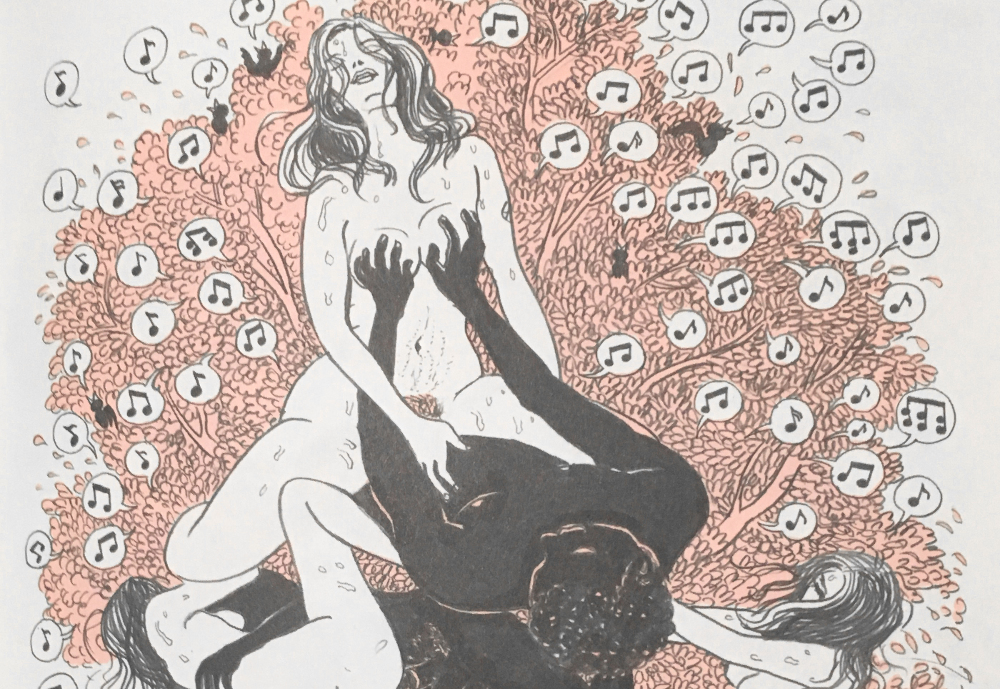 Ulli Lust is not only Exberliner‘s departing resident cartoonist, she’s also one of Berlin’s most lauded comics artists. As a parting shot, she spoke to us about her brilliant second graphic novel, How I tried to be a good person.

In her bold new tome, published this past September, Lust continues the exploration of her own life (this time, her twenties in her hometown of Vienna) with the same uncanny, almost eccentric candour that characterises both her illustration and narrative styles. Through her lighthearted panels, she takes the readers on the hilarious yet emotionally complex peregrinations of a young Viennese artist torn between two men – reliable yet platonic older lover Georg and her deepening sexual obsession with Nigerian Kimata. At the same time, she tackles two major taboos: female erotica (aka how to draw a black penis as a woman); and the depiction of flawed minorities in times of xenophobia (aka how to remain true to one’s own story without losing empathy). And she hits the mark with brio!

Like your first book, this one is mostly autobiographical… How does it feel to draw yourself, especially in the nude and in sex scenes? You’ve joked that during the creative process, a comic artist is too busy drawing away at her desk to remember that her parents will end up seeing her book…

Yes, it’s true that I didn’t think about that when I was drawing! Thank god! It’s such a private thing to tell a story. While drawing, I don’t think about how this will reflect my private life. I see it as just an example of how humans function and how life happens… I feel that with the comics form, you can let it all out, you can be honest. Some people are like “Aren’t you ashamed?” and I’m like, “Do you know what? It’s not a diary!”

So how truthful to real life are you? You’re kind of both the main protagonist and the narrator, right?

I like portraying other people – I’m the narrator in the comic, the source of the story. These are all real people, just the names have been changed; they are very accurate, but I had to cut a lot out, choose only a few scenes and glue them together. This was a three-year period, a lot happened. For example, I was not able to portray Georg in all his glory – otherwise it would have been a very French movie: a lot of talking [laughs].

Hmmm, see, I wouldn’t exhibit myself in public. I wouldn’t take my clothes off on the street or in a bookshop… well… I suppose it would depend where [laughs]. Let’s say that I wouldn’t put a photo of my ass on social media. In graphic novel form, it’s completely different. Maybe it’s an illusion that it is a shield. In the end, readers just project on me when they see me, and that’s something I have to deal with.

You give an honest, realistic depiction of women, light years away from the kind of fantasized female characters usually found in male-drawn comics…

Yes, the cliche of the comic is a female superhero, with big boobs and lips and minimal clothing. The graphic storytelling world needs a different depiction of women. Sexual exploitation of women in comics is huge, but amazingly, there are lots more women in the graphic novel world than men, so there’s some hope.

It was a huge pleasure! But yes, some people have had a problem. Some journalists wrote that they don’t want to see a big black dick… But I had to show his penis, I love it! [laughs]. People wrote in reviews that he is a sex addict. Someone wrote that I had too many lovers… I only had one! These people aren’t reading into my stories properly. One woman said, “Ugh, it’s so disgusting to show a black man who has problems with a condom.” Most men do! I wouldn’t have drawn this scene if it wasn’t a real-life issue!

In the end, reactions mirrors the prejudice of readers. If reviewers got annoyed with having to see a black man having problems with putting a condom on – well, that’s their problem, because my point was not that, but just how condoms can be sometimes, to all men!

Also potentially controversial is your treatment of Kimata later in the book, when he becomes violent toward you. The portrayal of Africans, often assumed to be refugees, is a touchy subject. And here again, you’re not romanticizing him…

It’s just not a refugee story. Kimata came to Austria by plane. He was well educated and had a valid working permit for most of the time we were together. Unfortunately it expired at one point. Most reviews of the comic use the word “refugee” or “asylum seeker” to describe him, but neither of these words ever appear in the comic. But as soon as there is a black man with residency permit troubles, these two words instantly flash into the minds of reviewers. I’ve always wondered why. Possibly because these days, it’s almost impossible for young Africans to migrate to Europe the legal way. And we’re so used to that now, we just accept the situation as normal.

Domestic violence is the bigger issue in the book. I’d like people to focus on that rather than the fact that Kimata is a black man. Violence against women doesn’t have a skin colour. This behavior is unfortunately an international, world-wide problem.

But in an interview we did about fellow graphic novelist Berliac, you acknowledged it was an issue all along – in today’s context, you felt uneasy with portraying a black immigrant with flaws?

It would be a bad decision to show all victims or vulnerable groups as saints – including refugees. Of course we want them all to be saints, but it’s not happening. But of course, if you live in a society which is getting more and more right-wing with more and more people venting their anger at newcomers, to portray a foreigner who’s not perfect is a little risky. On the other hand, why should we always choose the perfect stories? Foreigners also have the right to be normal people – they have flaws!

Still, did you hesitate before depicting Kimata’s real-life violence towards you?

In the story, he gets violent and I do not excuse him, but I think I show empathy. On how he gets there, with his culture and where he comes from, having to deal with such an ’emancipated’, free woman. It was shock-therapy, ‘blitz integration’ – the kind you don’t get usually! It is actually a love story – mostly a happy one but which becomes sad.

I remember that you actually met with fellow comic artists and discussed the issue with them – how to show empathy with oppressed/vulnerable minorities without distorting reality? Did they help?

Yes, I asked them how they would deal with that problem. Actually, I didn’t get any good answers… mostly something like “Find some Africans and ask them what they think!” Really? I didn’t see that as the issue, that I should ask Nigerians… what? “Do you feel well portrayed?” The answer I ended giving myself was that we shouldn’t censor ourselves. Using PC-ness doesn’t work. You should be truthful to yourself and to your story, even if it’s a painful truth. I’ve been asked whether I felt ashamed to portray an African as a violent person… but isn’t it a little weird to ask a victim of violence if she’s ashamed to portray the violence that took place? Of course, I’m the white privileged woman and he’s the oppressed black minority, but at some point he became a violent man and I had to show it. I’m showing how and maybe why it happened. But I don’t want to excuse him. I’m glad that my book gives me the chance to talk about this.

Did Kimata ever end up seeing the book?

He doesn’t know about the book – we’ve lost touch. One day I’ll try to find him in London – but I think he’d like it. He regrets what he did. And I think my book is pretty fair to him and our story. And he always had a lot of understanding for himself, too! So all in all, I think he’d rather be flattered.

What’s next? Is there another book on the horizon?

I’d planned one, but one of the subjects wanted to protect their privacy, so now I can’t do it. The other books are from a long time ago, but this is a much more recent time, and people are still sensitive. It happens, you know. I do have plans for more stories, but I know that I don’t want to write any more autobiographical ones at the moment.

December was your last comic in Exberliner…

I’m just running out of steam a little. I don’t do any other magazines, so I kept doing it as long as it was fun and I was enjoying it. I chose the themes – that was the best part! Nowadays I also teach three days a week in Hannover and I travel a lot with the book, so it’s a lot to squeeze in. I can’t focus on three things at once. Also, I want a new young person to take my place!

Vienna-born Ulli Lust studied at the Kunsthochschule Berlin from 1999-2004. In 2009 she published her prize-winning first autobiographical graphic novel Today is the last day of the rest of your life, reflecting on a teenage hitchhiking trip. She has illustrated a number of books, including a graphic adaptation of Marcel Beyer’s Flughunde, and her second and latest autobiographical comic, Wie ich versuchte, ein guter Mensch zu sein, was published by Suhrkamp in 2017. Lust now teaches drawing and comics at the Hochschule Hannover. She was resident cartoonist for Exberliner for the last year, drawing her final panels for us in December 2017, and wants to dedicate the new year to planning and creating more stories.