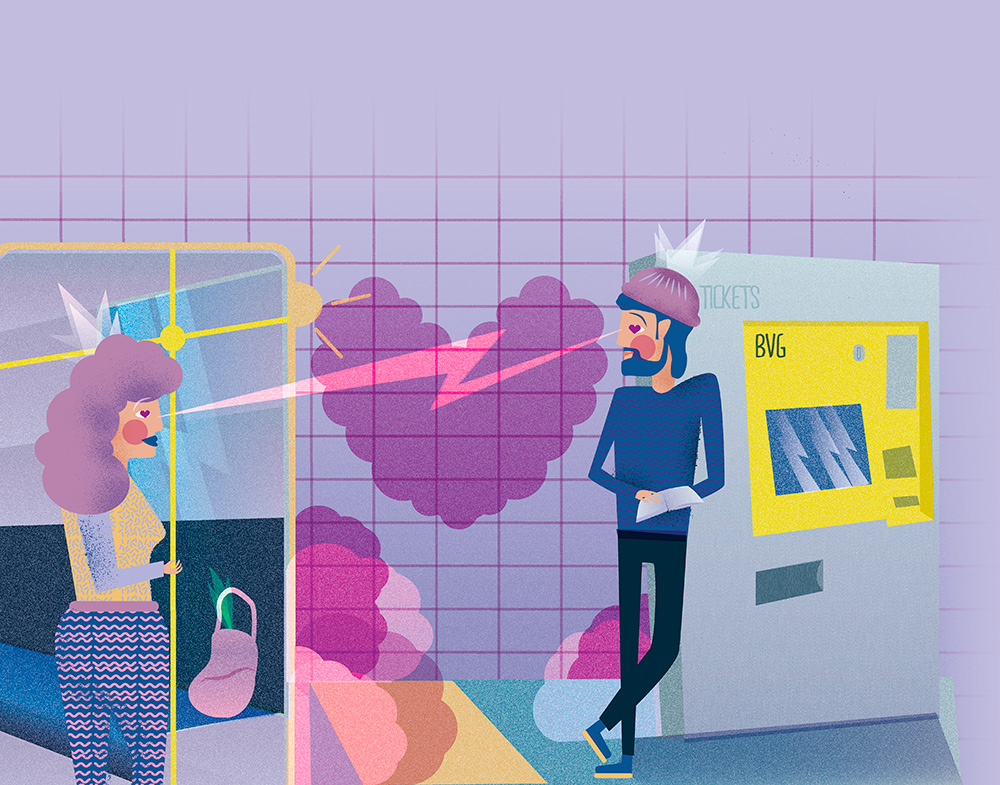 The BVG wants to help you find your U-Bahn crush, but re-connecting with that sexy subway stranger isn’t as simple as it seems.

Nicole*, a 33-year-old Berliner, was riding the U6 on a Thursday night when she saw him. A man in a blue jacket, about 1.8 metres tall, brown hair and piercing blue eyes, sitting in the seat diagonal to hers. As the train hurtled toward her stop, their eyes locked, and Nicole felt an instant connection. Should she talk to him? She hesitated for just a second… but soon enough, the doors opened, and she tore her gaze away and headed out. She’d missed her chance.

The “missed connection” conundrum has existed for as long as public transit has, and by now we have plenty of tools at our disposal for finding that cute fellow rider we were too shy to chat up in person. Americans use Craigslist, Parisians check out “Croisé dans le Métro” and Londoners can find their “Rush Hour Crush” in the Metro paper. But the first city in Europe to invent such a platform was Berlin, back in 2006. You can find the Meine Augenblicke page on the BVG’s website under “My BVG” and although you need to create an account and username to submit your own “moment”, you don’t need to log in to see if one of the thousands of Meine Augenblicke users is looking for you.

Some of the “moments” are lustful, such as a post from a user called “boner” that begins with “We were both waiting for the subway at Eberswalder and creeping around each other like tigers.” Others verge on stalkerish, like one from August 2014 where a user called “Looking for blonde angels” obsesses over a woman he glimpsed in 2003. “Help, I cannot forget you despite the long time… Please just give me the chance to tell you what I saw in your eyes then.”

Petra Reetz, the BVG’s head of press and Meine Augenblicke’s initiator, insists that “we are not a dating site.” Unlike Craigslist, Meine Augenblicke has a “red card” option that lets you block any messages or users that seem offensive. “Our idea was just to be nice,” says Reetz, who came up with the idea after a man called her around Christmas 2006 looking for the dream girl he’d spotted on the U6. Still, it’s difficult not to think of the (married) spokeswoman as a matchmaker as she asserts: “Write your name, write your station, and if you’re lucky, I will bring your moment back to you!”

But does it actually work? Reetz has no idea. “We are not sneaking around in your lives. For that reason, we never ask if people ever meet up, so we have no statistics of success rates. It’s up to people to use it.” All she knows is that the site receives some 30,000 visitors per month, although only 20,000 people have posted “moments” in the 11 years since it was created. “There are more people looking than posting… perhaps waiting to be found.”

For Martin, a 40-year-old man who’s been living in Berlin for 20 years, the wait for a reply on Meine Augenblicke can be long and lonely. On November 19, he spotted a “blonde French girl with a bike and pump on the luggage rack who was accompanied by a friend”. Martin acknowledges: “Since she was French I doubt she knows about Meine Augenblicke. But of course, hope should never die, so why not give it a shot?”

Would it be easier to find her on Tinder? Reetz reflects: “Meine Augenblicke was a great idea 10 years ago, but now that young people are using all of these digital platforms, maybe you don’t need it anymore.” But Martin remains undaunted. “In comparison to all the swiping left-right apps, these moments are meaningful and come from a very personal and intimate experience in real life,” he tells us. “I gained much more from my moment with the French girl than I ever had with any dates from dating apps.”

And sometimes, you might be better off sticking with the idealised version of an encounter. Take Nicole’s handsome brunette. She posted an ad on Meine Augenblicke shortly after their intense few seconds of eye contact, and to her surprise, just a few days later, she received an answer from a man named Peter. “He gave some details that only someone who has really seen me would know, and he knew at which stop I got out, which I hadn’t pointed out before.”

After a week of email correspondence, they agreed to meet up. With butterflies in her stomach, she waited for Peter outside a Mitte coffee shop until finally, she was approached by a man who asked, “Hi, are you Nicole? I’m the guy from Meine Augenblicke.”

There was just one problem. This ‘Peter’ was nearing his fifties, and grey hair had replaced any trace of brown. Seeing her visible confusion, the man backpedalled and told her he too was expecting a different woman… but hey, now that they were both here, did Nicole want to go out for a drink with him anyway? Still shocked, Nicole refused and went home.

Despite her disappointment, Nicole remains positive – “At least I had half a moment!” – but advises future users not to exchange anything private. Would she ever use the platform again? She laughs. “If I have another moment, I hope I will be courageous enough to grab it when it happens.”