Fatima, 35, met on February 19 at a demonstration in Mitte

“I left Chad in 2003. My husband was fighting against the government and after he was repeatedly threatened, we decided to leave. We made the journey to Libya both on foot and by car. It took us about a month. At that time I was still breastfeeding my 18-month-old son. We were living a comfortable life in Libya and my husband had work. But in 2011 we had to leave because of the civil war. When we left Libya, I had four kids and was nine months pregnant. I gave birth to my fifth son on the sea. Our boat was not allowed to dock in Lampedusa because we were still being processed. We waited for three days. After I gave birth, a helicopter came and took me to a hospital in Palermo.

I was in the hospital for 40 days because there were complications with the birth. We ended up staying in Italy for a year and a half. Life there was miserable. There were too many people, and the living conditions were really bad. The refugee camp at Cara di Mineo was bursting at the seams. Because of the civil war everybody was fleeing Libya at that time, mostly Africans who had been living there for a while. At that point we had no money but I had a gold chain which I sold and with the little money we got we went to France. There the situation was even worse – people were sleeping on the streets! In December 2012 we travelled to the German border and applied for asylum. 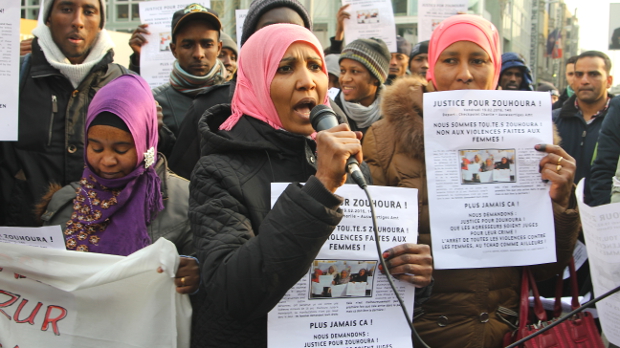 Up until now I was just taking care of my family and had no political life. But the news of recent events in Chad reached me and I just couldn’t stand still. On Friday [February 19] I took part in a demonstration against the rape of the 16-year-old Zouhoura. The girl was gang-raped by sons of army generals and senior politicians who later put the videos and photos of it on the internet. For me this was not only an act of violence towards this girl, it’s violence against all women. Taking part in the demonstration gave me hope that something might change, and for the first time I felt that my voice was being heard. So many women around the world are not allowed to speak up and this is taken for granted, especially in Islamic cultures. Violence against women is used as a political weapon. After Zouhoura was released, the men who raped her warned that if she spoke out they would release the videos on social media. The girl took a big risk and spoke up nonetheless. The consequences could have been terrifying, but she stood her ground.

Even though I’ve never been an activist, I see now how social media is also helpful in spreading words and raising awareness. I’m not well-versed in political activism but if I see that it pays back in the long run, I’m ready to continue. That day of the demonstration I surprised myself… I was talking so much. I released all the anger that I had inside of me, anger that had been suppressed for a really long time. I saw an opportunity and I used it the best I could. It was the first time I had done something like this. I don’t care whether I’m in Germany, France or Chad: in the future, I want to express my opinion about things that matter to me.”