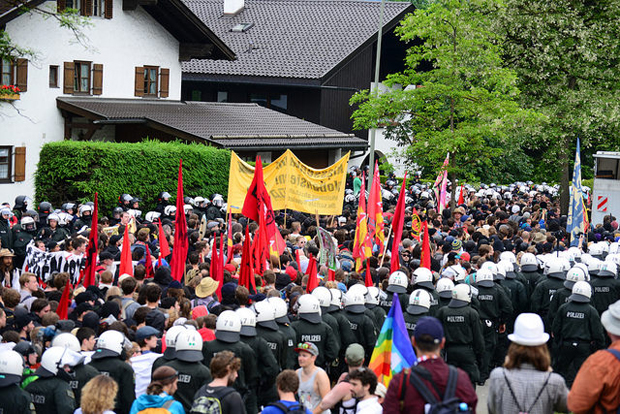 Have you ever noticed how Germans sometimes lack self-awareness?

Last Saturday, I got out of a train at Garmisch-Partenkirchen, about 100km south of Munich in the Bavarian Alps. The station was surrounded by a fence and hundreds of heavily armed officials. My group, five or six people from Berlin, were instructed to go to the left or the right by a German state functionary in a black uniform. Where were they sending us?

This is, mind you, in the same area as the Führersperrgebiet in Obersalzburg. Did this officer not realise what this scene looked like to literally everyone else in the world?

This was the G7. The government of the “free state” of Bavaria had called up approximately 24,000 police – a force equivalent to the army of Kenya! Since we were suspected of being demonstrators, we had to go to the left and empty all our pockets and our bags – even though I don’t remember anything in the Grundgesetz about the right to free assembly being conditional on a full-body search.

When Obama, Merkel and five more heads of state met last weekend in a landscape straight out of The Sound of Music, they agreed to phase out fossil fuels by the end of the century. In others words, they’ll do something for the environment within 85 years, after their friends have made a few trillion dollars from fracking. Generally, these politicians are great on long-term goals – but as John Maynard Keynes said, “In the long run we are all dead.” Their short-term goals always seem to involve more environmental destruction, social inequality and war.

Seven thousand demonstrators flooded into Garmisch-Partenkirchen. For the town’s residents, it was a bit like the carnival in Rio – they had been warned about dangerous terrorists, but in the end there were throngs of peaceful demonstrations and even quite a few clowns. As a number of them explained to Vice, they were unhappy that the police had put their town under siege. One woman said she had been a Normalbürger until the G7 – but now she was a Wutbürger.

There was a “black block” – men hiding their identities behind black masks, carrying clubs and dangerous chemicals to cause as much damage as possible. But these were the police –  there were three or four of them for every demonstrator. In some pictures you can see a small group of protestors surrounded on all sides by three rows of police. As the marchers chanted frequently: “This is what democracy looks like.”

This is what democratic rights look like in Germany in 2015 – sure, you can express your views on the street, as long as you’re willing to subject yourself to the constant threat of being pepper-sprayed. The courts had decided a total of 50 demonstrators could protest in earshot of the castle where the G7 was taking place – but only if they agreed to be taken there in police buses. Thankfully, no one wanted to be the “alibi protestors” of a police state. Instead, small groups were able to block the highway on the way to the castle.

So what was the result of the G7 protests? Really just a sinking feeling that it’s easier to demonstrate in Russia and China. Plus some very uncomfortable reminders of Germany’s past.