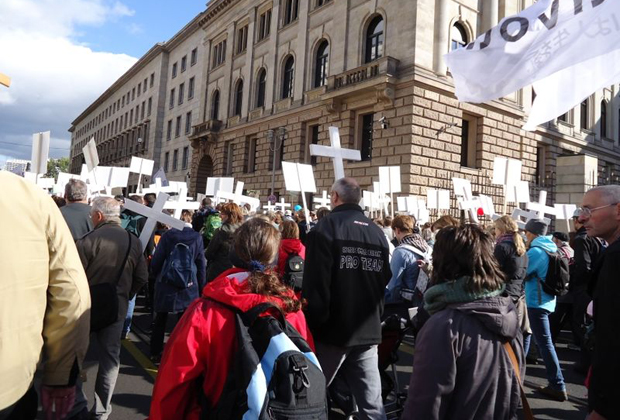 “What do you say we lighten things up and talk about abortion?” – Bill Hicks

I went to a Christian military school when I was 12. So in my life I’ve had plenty of heated discussions with people who oppose a woman’s right to choose.

But in more than a decade in Berlin, I’ve only spoken to a single one of those confounding people. That, by the way, is one of many things I love about this city…

It was at a dinner party. I have no idea how the topic came up, but I was talking about abortion with a Zwischenmieter from a far-off country. He told me that his mother had had seven children and loved each one – he was glad none of them had been terminated before birth. For him, every fertilized egg was a little tiny human being and every abortion was murder.

This guy worked in a scientific field, so he could understand how insemination works, as explained by the National Institutes of Health from the US: “Around half of all fertilized eggs die and are lost (aborted) spontaneously, usually before the woman knows she is pregnant.”

That’s right! His loving mother had inadvertently, according to these statistics, murdered seven of his brothers and sisters! You could blame her accomplice (God). But those little zygotes (or little babies?) were aborted when they didn’t implant in the uterus. So does he want to send his mother to prison?

Unfortunately, this guy is not alone. This Saturday, several thousand wackos will come together and carry white crosses through Berlin’s centre. They want abortion – already heavily restricted, in fact technically illegal in Germany – to be even harder to access. Our reporter two years ago wrote that these people at this Marsch fürs Leben look like a bunch of “totally mellow uncles and aunties and kids”. So why do they care so much about what other people do with their bodies?

When you think about it, the people most enthralled about protecting “unborn life” (i.e. little clumps of cells) are also the most callous to actual living, breathing, feeling humans. These right-wingers are the same ones that advocate deportations of refugee children alongside cuts in social spending. So what do they really care about?

These same right-wing Christians are protesting against sexual education in schools in Germany’s south west. They don’t want children to learn about sexual diversity, just like they don’t want women to be in control of their own bodies. Their real obsession isn’t with abortion – it’s with sex.

These so-called Lebensschützer are unfortunately not just a tiny group. They represent a broad coalition of backwardness, from the Catholic Church to Evangelicals, from the AfD to the CDU. They even get support from the yellow press, in the name of “free speech”.

I will definitely be protesting this Saturday, and you should too. Readers can pick between a more mainstream demonstration at 11:30am at Brandenburger Tor or a more radical protest at 11:00am at Anhalter Bahnhof. (They’re both good.)

One particular slogan I recommend to hurl at the reactionaries: “Eure Priester sind so schwul wie wir!” (Your priests are as gay as we are!) But as angry as we’ll all be feeling, let’s not forget these are mostly sad old men who are frustrated because they can’t get the hot gay action they’ve been longing for their whole lives.

Oh, the world would be a much more comfortable place if people could just fuck a bit more.