A member of the Identitarian movement explains his own battle to preserve the identity of das Volk. 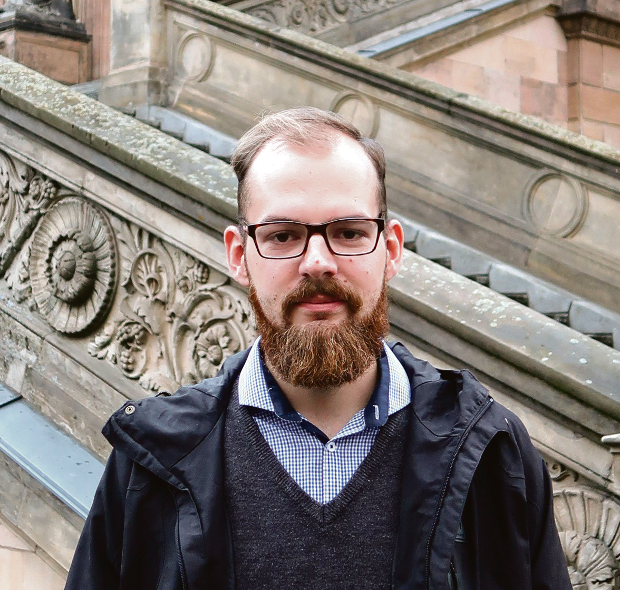 The New Right, in Germany as elsewhere, is all about identity politics, and nowhere is this more evident than in the youth group Identitäre Bewegung – literally, “identitarians”. The organisation, which claims to have between 600-800 members, takes inspiration from historic resistance groups and guerrilla activism, with decidedly different goals. They climb Brandenburg Gate to demand “secure borders” and cruise the Mediterranean to intercept NGO boats attempting to come to refugees’ aid. The German press follows them anxiously, calling their members extremists and neo-Nazis. Because they’re young, educated and, in the case of prominent spokesman Robert Timm, bearded, they’ve been nicknamed “far-right hipsters”.

But what is it that makes this overwhelmingly male group of white Germans fear for their identity, when they so clearly are part of the county’s demographic majority? We spoke to 26-year-old Timm, an architecture student who serves as coordinator of the Berlin-Brandenburg Identitarians, to find out what he is fighting for.

How did you first get interested in identity politics?

I went to a high school in Kreuzberg which was the embodiment of multikulti. I liked it at first. But then I began to see a lot of conflicts among the students which stemmed from cultural differences. A key experience was when Sally Perel, a Jewish witness of the Third Reich, visited the school and a few Palestinian kids disturbed the event and even threatened to physically attack him. I was expecting there to be consequences for them, but the school turned a blind eye, because they were Palestinians. I noticed how some minorities get special treatment.

But you didn’t immediately turn to the identitarian right, did you? What happened?

I used to have sympathy for Die Linke and the Pirate Party, I even gave them my first votes. I was hanging out in hacker spaces such as Tacheles and C-Base. I used to go to anti-Nazi demonstrations – the last left-wing demonstration I went to was against the ACTA trade agreement in 2012. But my doubts about multikulti grew and when the Bataclan terror attack happened in Paris, that was a final turning point for me.

Is the identity that you are defending purely based on ethnicity?

Mainly, but not only. Fundamentally we want to correct this notion, which developed during the Merkel era, that the population (Bevölkerung) equals the national people (Volk). According to the German constitution, sovereignty belongs to the Volk, not just whoever happens to be here. In Merkel’s Germany, this has come to include anything and everything. Suddenly headscarves are supposed to be a German thing. Well, they are not. We are trying to protect our democratic values and freedoms.

Protect them from what or whom?

If you have 200,000 immigrants coming to Germany every year, their demographic weight will increase. That will change democracy as we know it. There will be new political parties which will cater to the interests of migrants. Then, at best, we will get Muslim holidays, or they will ban advertisements showing naked women, supposedly because they’re “sexist”.

So to refer to an infamous AfD campaign poster – you prefer bikinis to burkinis?

We are defending the hegemony of German people in Germany. This includes standing up for our culture, which has been shaped by Christian and Jewish faith and the philosophical traditions of enlightenment and humanism. We have achieved so much in gender equality and rights for homosexuals, and now we see our cultural identity under threat. If things continue as they are, it is only a matter of years until we indigenous Germans and our culture become marginalised.

Do you consider all minorities equally problematic?

In the case of the Vietnamese community, for example, I see no problems. They sort of keep their own identity but don’t cause any trouble. Most importantly, they don’t make any demands for special treatment such as getting their own holidays, or carry their religious views into public spaces, as in the recent Shiite mass self-chastening in the streets of Bonn. For most Muslim people, their religion stands above the law. Look at the acid attacks in London, look at honour killings – that’s not something we want in Germany.

What do you say to Muslim people who have lived here peacefully for decades, such as the vast majority of Turkish immigrants and their descendants? And what about those seeking refuge from war and persecution?

There is no doubt that we should grant asylum to those who really need it, for the necessary amount of time. When the war is over, the cause of their flight removed, repatriation should be the standard procedure. As to the Turkish community, it should either assimilate or leave Germany.

You don’t believe in integration?

No, we don’t. The goal should be to assimilate. A migrant from central Africa will probably never see themselves as wholly German. But somewhere down the line, his grandchildren might manage assimilation. So our idea is not to be this bio-German club. We also have members who do have a foreign background.

So, you’re fighting the same anti- ”Islamisation” fight as Pegida?

Pegida is probably the organisation we have the most overlap with. We completely share their positions on the safety of borders and the enforcement of law. For example, we want proper immigration legislation and investment in the authorities responsible for its implementation. Right now there is a huge backlog in the processing of old asylum applications and criminal complaints cannot be prosecuted because of a lack of resources.

How close are you to AfD?

With AfD, things are more complex. We do agree with their positions on immigration policy. But there are a number of different sub-groups in the AfD. I’ve heard positive comments about IB from Patriotische Plattform [a group on the far right within AfD], so I assume they would be the ones we’re closest to. The way I see it, the CSU is also quite close to our positions on immigration. Political figures like [Bavaria premier] Horst Seehofer would be a great potential for our movement…

What about gender and sexual minorities: can a gay or transgender person be a member of IB? Do you support their fight against dicrimination?

I don’t know of any transsexual IB members, but we do have gay people who are worried they might have to fight for their rights all over again in the face of Islam’s growing influence. In my view, there’s a problem with such minorities when they start monopolising the public discourse. We have been talking so much about same-sex parents and transgender people… public discourse should be more representative, so the majority’s interests don’t get overlooked. As for all those queer feminists who complain that women can’t get decent jobs or make it in the sciences, they should have given that a go rather than doing gender studies and complaining about discrimination. We have women in our movement who are sick of being shamed for focusing on family rather than careers.

You climbed the Brandenburg Gate in August 2016 to unfurl a banner saying “Secure borders, secure future”. What was it like standing up there?

The first couple of minutes I was quite nervous because there were so many police so quickly. But then I realised they couldn’t really do anything, and looking down on all the commotion was quite fun. I wonder if the reaction would have been the same if it had been Greenpeace up there. They’ve done the same thing twice. There were people chanting “Nazis raus!”, but also others who seemed to approve and a larger group who didn’t react either way.

I find it outrageous to even have to answer questions like this. We are protecting democracy and we’re not out to exterminate anyone. We are not denying that there is room for Islam in the world; we just don’t think it’s here. Muslims can of course come to Germany – we just think that in the long run, they should choose which culture they want to be part of. By throwing the word ‘Nazi’ around so liberally, our political opponents are actually trivialising fascist ideologies. The problem is that the majority of journalists don’t see their role as that of unbiased observers, but as some kind of people’s educators or even political activists.

The new right has coined the term Lügenpresse, “lying press”. What is your issue with mainstream press?

I think the word Lügenpresse is justified in some cases – or Lückenpresse, deliberately leaving a “gap” in information. Take last month’s Frankfurt book fair and the clash with left-wing demonstrators at the book presentation with [AfD politician] Björn Höcke. A guy from satire mag Titanic tweets that IB members shouted “Sieg Heil!”; the mainstream media share the tweet and then illustrate their story with an image of an aggressive looking skinhead – who in reality was a left-wing protester! I’ve had so many bad experiences with the press, I can’t even tell you. Once I talked to a Taz journalist for half an hour and the headline he produced was something like “Nazis now wear beards”.

There has been a lot of fake news about that, but it really was a success. As soon as we got there, the other NGO boats stopped what they were doing because we were watching, and there was a visible dip in the numbers of people they brought to European shores. Our mission was called “Defend Europe” and it was in part symbolic, but it was interesting to see that our presence had such an effect.

While you were at sea, the police searched your apartment – you have criminal charges against you for standing in the Cottbus market square and handing out pepper spray to women “in case they get attacked by aggressive refugees”.

I don’t see how what we did was a crime. If it had been Greenpeace doing some kind of unannounced action of the same small scale in the market square, there wouldn’t have been any consequences. Anyway, the chaos in my flat was limited. They took all my activist material, flyers and such, as well as my computer. They’ve given the computer back, after getting all the data that was on it. I don’t think they will have found anything of interest, as we’ll see when the trial takes place.