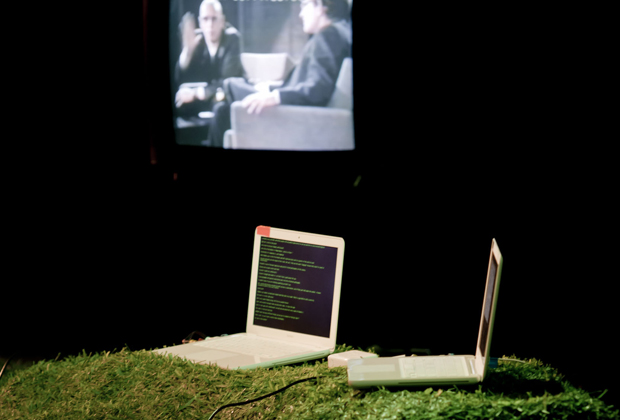 Annie Dorsen considers herself a refugee from theatre. The 36-year-old New Yorker enjoyed success off-Broadway with the long-running musical Passing Strange (for which she won an Obie as co-creator/director), before opting for alternative theatre using a conceptual approach and digital media.

In her latest piece she uses computers as actors. All the action in Hello Hi There features the conversation of two chatbots, while television footage of another debate, Foucault versus Chomsky, echoes the machines’ talk.

Hello Hi There could be the title of a pop song. How did you come up with it?

When I first made two chatbots talk to each other, they got stuck on this ‘hello – hi there’ back and forth. The outcome is a juxtaposition of banalities. Even we humans don’t really invent anything new when we talk. It is through the re-arrangement of existing words and concepts that we create something unexpected, something new. This is exactly what the chatbots do.

Do you think humans can be substituted by machines?

I consider everything a person uses as a machine, and we ourselves are part of the machinery. I wouldn’t make a big distinction between machines and non-machines. In this play the actors are the computers, but I don’t want to create a competition between people and machines. I go for the idea that it is an intimate collaboration. There is a delicate interdependence – we build machines and the machines build us back.

Of course, it’s quite a radical move because theatre has always been the ultimate humanist art form, where man is at the centre. By removing the person from the theatrical equation I challenge the centrality of the human. For the last several years I have been trying to push at the boundaries – I like applying some techniques which are very common in other disciplines, but haven’t been used much in a language-based form like theatre.

How would you express beauty?

I used to be very interested in this romantic notion of the difference between the beautiful and the sublime, but I am really not thinking about aesthetics as such. Theatre is still pretty much interested in the production of image and I have gone far away from that. I am more into systems than images, into constructions, like a little performance machine.

There is a big suspicion these days about aesthetics, for good reason. I am sick to death of people trying to create nice images. It’s the easiest thing to do in the world. It might create beauty but it doesn’t necessarily get close to the sublime.