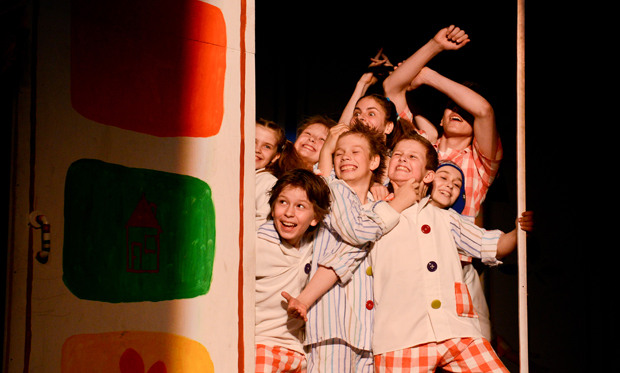 On a recent warm June day, 15 people lounge around the Ambulatorium Theatre in Friedrichshain, wearing tights and eating döner kebaps, chatting and joking in Russian. This is a rehearsal for the Upsala Circus, a Russian charity that since 2000 has transformed street kids in St. Petersburg into acrobats, jugglers and plate spinners. The group has toured across Europe, and it makes its Berlin debut this week with The Ping-Pong Ball Effect, an experimental show that incorporates juggling, acrobatics and acoustic and electronic music – and, of course, plenty of ping-pong balls. We sat down with Upsala co-founder Larisa Afanaseva.

What brings the Upsala Circus to Berlin?

Larisa Afanaseva: The first reason is that it’s the best city ever. We have a new, very fresh show right now. We wanted to show it around the world. We’ve done this German summer tour, including in Düsseldorf, Bonn, Leipzig and Kassel. It would be strange to perform in Düsseldorf and not Berlin.

How did the Upsala Circus get its start?

LA: (Co-founder) Astrid Schorn had the idea 14 years ago. She was a German girl, working on her degree in St. Petersburg. She came up with the idea for a social project working with children and performance.

How did you and Astrid meet?

LA: It’s a strange story. St. Petersburg is huge, and in Russia, everyone believes in fate. At that time in my life, I didn’t really know what I wanted to do – circus or professional theatre. Then, for a whole month or so, I saw this woman every day. I saw her on the street, on the bus, at the market. She had this unicycle she rode around. Honestly, she was a total freak. People that are that different really stand out in St. Petersburg. Some friends of mine told me that this crazy woman had started a children’s circus. So I decided to get involved.

You call yourself a “circus for hooligans”. How do you get these troubled kids interested in joining the circus?

LA: It was difficult in the beginning. We used to go to basements and rooftops – places where kids were living in poor conditions – and ask them if they wanted to join. Even if they hadn’t thought of performing in the circus before, most of them just wanted a chance to do something with their lives. Now, we have programs with correctional facilities and institutions.

Once the children join the circus, where do they live?

LA: When we’re on tour, they all live together. At home in St. Petersburg, some of them live with their families, some in orphanages. In the orphanages, they have a social worker to manage their affairs and make sure that they receive proper schooling. All the Upsala children attend school.

Do the children tend to stay in performance and theatre after they leave the circus?

LA: Most of them. In Russia, circus is very traditional. With Upsala, they get to try something different: beatboxing, acrobatics, electronic music, breakdancing. It’s like experiments on stage. We have a partnership with the Fraternité Académie in Paris, and a lot of our kids are invited to go practice there for several months. That’s such a big deal for them. Going to Paris after Upsala can be overwhelming.

What are the plans for developing Upsala in the future?

LA: We have so many plans. On a global scale, we’re trying to build a culture that is an alternative culture, a subculture for young people. We want to show them that they have options that they might not have thought of yet. That’s why we include some much non-traditional stuff in our performances. We just had a birthday party for the circus last year, and all the kids who are now grown-up came back with their kids. We’re really a factory for good people.