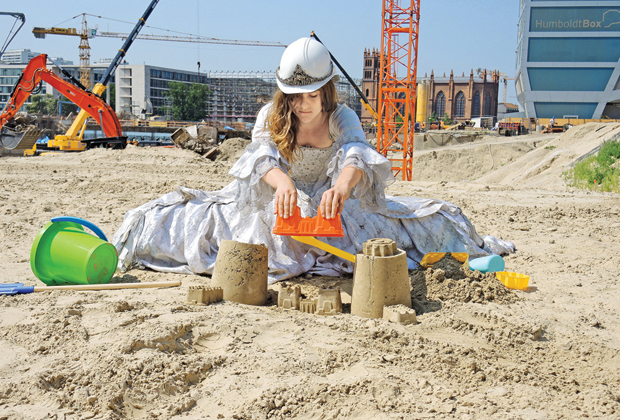 If you’ve been in Berlin longer than, oh, three days, the area between Alexanderplatz and the Reichstag probably isn’t a top destination. But a new project from performance company MS Schrittmacher aims to show Mitte in a different light: as a site of economic crisis.

Places & Traces is a rickshaw tour (available in English or German) to eight different spots in the district. At each stop, the guide – on our tour, choreographer and MS Schrittmacher founder Martin Stiefermann– hands over an iPad and switches on the speakers, tied to the bike frame by a piece of twine.

At Alexanderplatz, Stiefermann reads aloud an excerpt from Christa Wolf’s November 4, 1989 speech protesting the East German government, and reminds us that the square has a history of resistance stretching back more than 150 years. In the accompanying video, a man in a black hoodie holds a sign reading “NO” as passers-by cast puzzled looks.

From there, it’s on to the Rotes Rathaus, where we’re schooled on the chronic delays and wasteful costs of the still-unfinished Berlin-Brandenburg airport. The Stadtschloss, meanwhile, gets the most memorable video: Johanna Lemke, in an ornate rococo dress and hard hat, builds herself a sandcastle in the construction zone before burying a pile of money in the ground.

Places & Traces can feel fragmented, and you spend a little too much time fighting against screen glare. But it also provides a clever, keen-eyed glimpse into Berlin’s economic imbroglios.