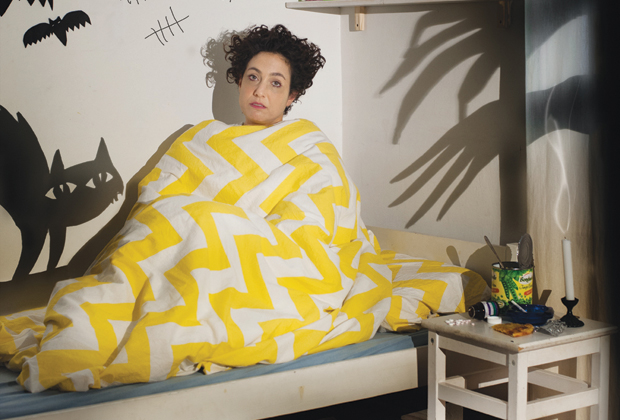 With Let’s call it a day!, Hila Golan, Niva Dloomy and Ariel Nil Levy deal with the sleep disorder of our entire society.

The trio of Berlin-based Israeli theatre makers has been working together since 2010. Last year’s Save Your Love – Part I premiered with great success at Theaterdiscounter; November 19 sees the world premiere of their newest, sleep-centric piece.

What brought you to this topic – were you very tired yourself?

Hila Golan: You didn’t ask if we didn’t sleep, but whether we were tired, which I like. It’s part of the phenomenon: we all live an exhausting race. And that doesn’t concern only artists. We tend to be constantly available to our work, with emails, phone calls… it never ends.

Niva Dloomy: What is interesting about sleeping disorder is that it can also be a metaphor: it shows how limits between working and relaxing are disappearing. If you don’t put the border there, it won’t be there. You will always have places to go, people to meet, something that you need to do.

Ariel Nil Levy: There is always something that you miss in this city. You chose to live in Berlin with the knowledge that you constantly miss the coolest party, every moment. HG: And your personal life, which is supposed to be fun, becomes a race as well, like a job. We want to put a question mark on this way of living, of running from stuff to stuff.

So you deal with sleeplessness as a way of living?

ANL: A way of living which is also connected to a certain rhythm. What is the rhythm of this sleeplessness? Where does it start? What is the point when you start not to sleep?

ND: How do things look at the end of the day – when it’s only you, and you don’t have anyone to blame, except yourself? We are asking: what are those things that we as a society cannot sleep because of?

ANL: What is this one thing? Why can’t we go to sleep?

How do you work?

HG: It starts with the three of us.

ND: We ask a lot of questions, until we find some elements that connect most of them. Then we start to understand what the subject is.

HG: …and we flood the table with all that. Then we get confused!

Then you start the rehearsal.

HG: Yes, we put the material on the side and go deeply into private moments, memories, feelings, find where the issue meets us.

ND: Then we try to frame it to tell a story – which is actually never a story.

HG: We keep breaking the lines.

ANL: Our pieces are made out of fragments. We sort the things that we’ve accumulated and make a list of what belongs to where. And search: where is the juice? Where is the crime happening?

HG: Then it gets more clear. At that point we call the stage designers and musicians and start a dialogue with them.

ANL: It’s one of the sources – it provoked our thinking.

ND: It opened our minds to other ways of dealing with the issue.

HG: It was a good base to begin with, putting the issue as a phenomenon.

ANL: But then once we started with the subject, we kept finding related stories all the time, everywhere.

Can you tell one of those stories?

HG: We read a really interesting article in The New York Times: Maria Fernandez was living in New Jersey, she worked in three branches of Dunkin’ Donuts, until she was found dead in her car between shifts. It’s not clear if she died from tiredness.

HG: She was just working all the time, around the clock, for a few years. Between the shifts she took a nap in her car for one or two hours.

ANL: Now she is our protagonist!

You use also a lot of autobiographical material. How do you keep from getting too personal?

ND: Well, we do get too personal.

ND: There is no border. The only thing that is really important to us is to be aware.

ANL: We are using ourselves as material ad nauseam.

ND: When it starts to be too much, or too embarrassing… it means that we are starting: we touched a thing that we really need to deal with, to understand, even if we are ashamed.

HG: It means that it’s a point where we should keep digging.

Where did you dig when working on this play?

Did you talk to other people about their sleeping disorders as well?

ND: I interviewed my father, who really has a sleeping disorder.

HG: After a while, it became clear that we should use it – it’s another point of view, a talk between a dad and a daughter. She is worried because he is not sleeping. And he is taking medication. It opens a whole new crazy subject, medication.

HG: And it just stops affecting you after a while. At the beginning you use half a sleeping pill, then you need one and then you need two, but you can’t take more than three. And you don’t dream, the sleep is not the same, you don’t sleep deep…

ND: Since we started to work on it, we’ve all been suffering from sleeping disorders!