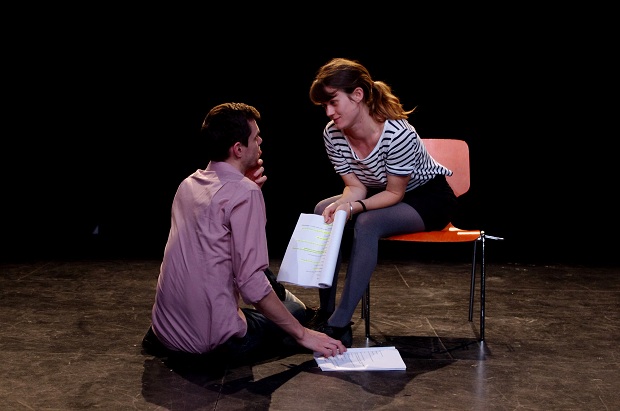 Having won over audiences in films like Polanski’s The Pianist, actor Tom Strauss opens up about his latest role – as curator of The Lab play development programme at the English Theatre Berlin.

The nearly decade-old Lab programme has had a spotted past. As expat writers come and go, it can be difficult to maintain an institution devoted to the development of new English-language works.

Currently experiencing a revival under the watchful eye of veteran performer Tom Strauss, The Lab uses the rehearsal process to refine the text, ultimately giving the audience the opportunity to voice their opinions in a discussion that’s often as entertaining as the show.

The May edition features Cinders, a new piece by Irish playwright Neil Bristow that begins with an odd phone call from a sister-in-law, then descends further into the web of incestuous family relations.

Are the submissions usually traditional, like the plays often produced by the ETB, as opposed to the devised theatre pieces at other venues?

I lean anyway toward the school of more theatrical plays, back to when I went to theatre school [in Chicago]. In those days I was much enamoured of Brecht of course, but also Pirandello, who plays a lot with what is real and what isn’t.

Death of a Salesman was big at the time, and I always used to get very upset about discussions of it, and I realised that this whole realistic, naturalistic type of theatre just didn’t appeal to me. I didn’t particularly care for plays only involving normal, everyday types of people in humdrum situations, even if they could be very dramatic. Over the years my heart still leaps at theatrical productions, even films.

It seems like The Lab would be more likely to support naturalistic pieces, because they’d work better as staged readings.

The last one we got was definitely theatrical. The director also chose to do it really as a staged reading, as opposed to the interpretive readings our predecessor preferred…

…in which everyone stands in a line, reading from their scripts…

…and where you are communicating directly to the audience and not with each other. She went beyond that and broke the whole thing down into little vignettes, almost like in a film. It went from one timeline to another in a rather intricate way. And the performances were more theatrical than naturalistic, but at the same time some of them were absolutely poignant. I’m hoping to do the same with Neil’s play. And while it is a family drama, it is a very strange family indeed, and a little bit kinky. No, definitely kinky.