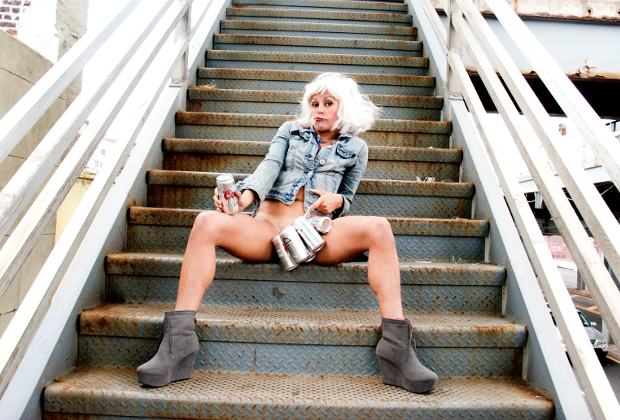 Comedian Adrienne Truscott takes back the rape joke in Asking For It.

The New Yorker comes to Berlin as part of Sophiensaele’s The Future is Female comedy festival (Sep 14-23). Performed in only a denim jacket and high heels, her one-woman show makes up in attitude what it lacks in clothing.

So how do you put together an hour of stand-up about rape? What’s so funny about it?

I don’t make any jokes where the act of rape or victims’ experiences are made to seem funny, ever, ever, ever. What I joke about is how unbelievably stupid and backwards the culture around it is. The ridiculous assumptions that are made – that someone’s outfit has anything to do with any act of violence done to them. You could just say, why are choirboys being raped? They’re not out at a bar or walking home late at night.

What’s your favourite joke in the show?

I put out this preposterous thing: if we can’t all agree on what constitutes as rape, we could at least all agree that it’s rude. It’s like, if you ask someone if they want milk in their coffee and they say no thank you, and then you dump a pitcher of milk into their coffee… People wouldn’t do that. Yet when someone is trying to aggress you sexually and you say no, they just carry on and do it. It makes the absurdity of it clear.

Which material gets the strongest audience reaction?

When I talk about Bill Cosby. At this stage most people would be happy to watch him rot in jail, but there is still a little bit of the feeling of “Oh no, not Bill Cosby! He was America’s TV dad, the best, most fun dad in the world!” So my joke is “Yes, Bill Cosby, because it’s usually someone you know and trust.”

Do you get asked if you have been a sexual assault victim yourself?

Yes, very frequently. And I understand why, totally. But I’ve watched male comics do a full 20 minutes of material that is entirely about hitting, murder or rape. I reckon they’ve never once been asked, “Do you have a history with violence towards women?”

It’s the sight of the trespass we’re talking about. I’m in high heels, I’ve got long blonde hair, I’m drinking real booze, I’m in a room full of people I don’t know and I’m not wearing pants. That, so I and every other woman on the planet have been told, is the exact scenario of ‘asking for it’.

Were you nervous your first time performing like that?

Funnily enough, what was nerve-wracking was doing stand-up for the first time. I was nervous about the jokes, not my vagina. I know my vagina works!