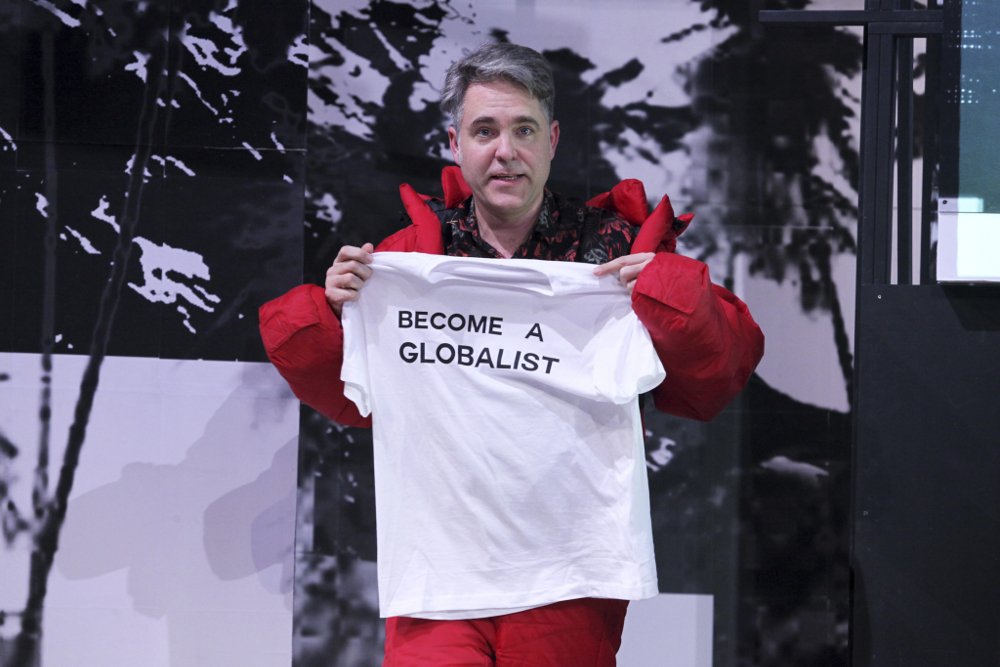 Alexander Karschnia on Invisible Republic and how women are shaping the way forward. Catch it at HAU 2 October 12-15.

Since it was founded in 2003 by Alexander Karschnia, Nicola Nord and Sascha Sulimma, the ensemble andcompany&Co. have devised works on topics ranging from boredom to the refugee crisis, mixing politics with pop culture, cutting up texts in a technique they call “re-mix and re-animation”, while constantly searching for new collaborators from different disciplines. Their newest piece Invisible Republic premieres at HAU this month, the result of an invitation to four female performers to research connections between three anniversaries this year – 50 years since the protests of 1968, 100 years since Germany’s November Revolution, and the 200th birthday of Karl Marx. The result hinges on Rosa Luxemburg as an icon of democratic socialism and feminism, while the voices of Bob Dylan and Daniel Cohn-Bendit chime in, too.

Solidarity. Since 1968, we have been trying to regain a sense of solidarity, of relating to each other by caring for each other. This is maybe the most important contribution of feminism today. Feminists put that high on the agenda.

This belief in solidarity very much inspires the way the ensemble works, right?

Yes, for every production we do, we become a team. Even if actresses have never worked with us before, we immediately treat them as equals. There’s a big debate in the German theatre world right now, dramaturg Bernd Stegemann, who is taking part in Sahra Wagenknecht’s Sammlungsbewegung, has been attacking us, the free scene, for being “neoliberal”. He says that talk of teamwork is typical in new management theories. We say, “You’re missing the way in which these groups foster relationships of solidarity and how we strive to work collectively for the collective.” It’s not the same as flat hierarchies in some company.

How do you feel about 1968ers and the way they seem to have dismissed any protest movement that came after theirs?

We talk about this in the play. The younger generation that missed the revolution has this melancholy. And I always felt like my generation was born into a melancholy similar to what Bini Adamczak described in Beziehungsweise Revolution about post-revolutionary Russia. 1968ers like Daniel Cohn-Bendit gave us a feeling of: “Whatever you do, you missed it. We already did it. And since we decided we don’t need barricades anymore and we gave up on revolution, you also have to give up.” But feminists say they don’t feel that way because feminism had just started. 1968 was the beginning – not the end – of something.

So is that post-revolutionary depression a male phenomenon?

That’s the feminist take we explore. Feminism started out marginalised, now it’s central: every progressive thought is informed or shaped somehow by feminism. I think that my practice as a free theatre maker is also shaped by it. Others may be conscious of it or not, for example the talk about “Experten des Alltags” (experts of daily life) in documentary theater. But this phrase comes from feminism. I found it reading texts from 1968 and the 1970s, when women described their roles saying, “What are we most of all? We’re experts of everyday life.” So, feminism now describes a lot of things that are not only limited to women in today’s society but also apply to a much larger picture. And we draw on that. Invisible Republic may evoke Weimar or Bob Dylan’s famous “basement tapes”, or other things, but it is also the invisible republic of women, of feminism.